Agent Hunt is a type of story intersection where you enter the game as an enemy hunting one of the agents.

・If the agent is defeated in the stage, the victory falls to the creature.
・Even if you are defeated, you will respawn indefinitely until the agent clears the stage.
・The number of agents defeated is displayed on a special leaderboard.
・In Agent Hunt -> Skill Select you can buy & equip special skills unique to this mode.

* This mode must first be unlocked by clearing one of the campaigns.
* This mode is only available on certain stages in Campaign mode.

Agent Hunt is a type of story intersection where you enter the game as an enemy hunting one of the agents. Resident Evil 6 primarily revolves around a story campaign, so this mode is designed not to interfere with that type of gameplay. In other words, defeating the agents will be very difficult unless you work together with other CPU and player-controlled enemies. It'll take good battle tactics and a bit of perseverance, but you can bring down an Agent no matter how strong! 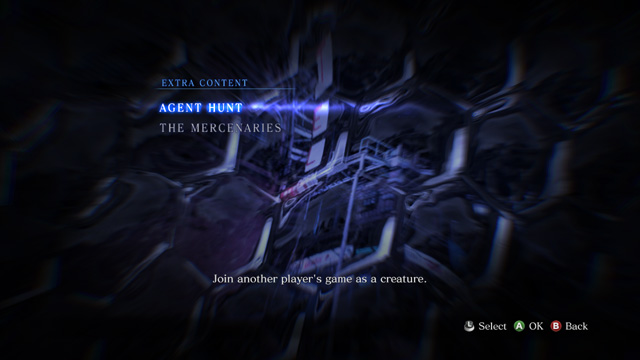 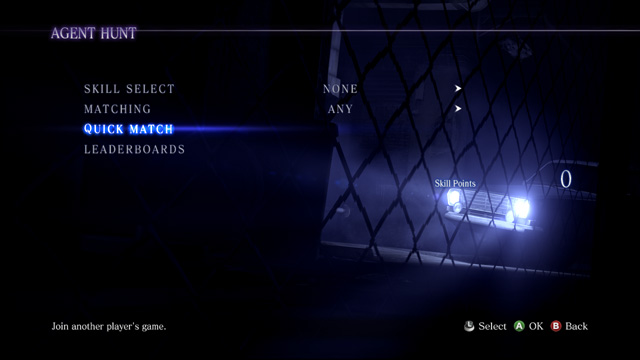 Choose from the following options.

Select the game you wish to join to begin. Control explanations will be displayed on the lower part of the screen.
(Controls displayed are for the zombie. The controls will differ depending on the type of creature.)

Hold down the ○ buttonB button to see where the other hunters are located.

If you are playing through the Campaign and other players enter in Agent Hunt Mode, a message will be displayed on screen indicating this. However, you will not be able to differentiate the enemies controlled by other players. Defeating player-controlled enemies will reward you with better items.

Within Skill Select in The Mercenaries, you can purchase and equip skills that are exclusive to this mode.