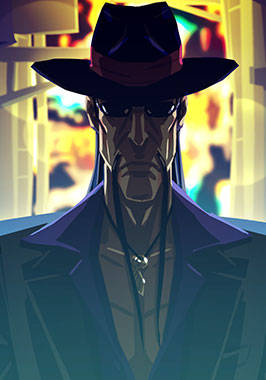 F.A.N.G walks along a busy city street in the spring.
He was a major player in the underworld, and served as M. Bison's right-hand man.
What has become of him since the fall of Shadaloo?

As the sun began to set, a warm wind blew through the well-organized buildings of the city, crossing the streets and pushing roadside garbage into dark corners. The starless night sky was filled with a soft layer of the smog that the country was becoming famous for. The lights from the neon billboards, boastfully advertising new high-tech innovations, reflected off the smog, filling the sky with a dull glaze, casting a soft shadow over the man who walked down the streets.

In the past, this man has been called many different names - Wan Lei, Fan Shao Fei, Michael Fang, Fo Manchu, but none of them were his real name. Even the man himself had forgotten what his real name used to be. Now, he was known as F.A.N.G. A member of an underhanded corporation, his name was secondary to that of his profession as an assassin.

He wore a suit fitting his thin frame and walked with his hands stuffed inside of his pockets. As an assassin, his weapon of choice was poison. Among the black organizations that made up the underworld of this country, he earned his first reputation as the poisonous assassin. Quite some time had passed since F.A.N.G's first job as the poisonous assassin - it was a job that robbed him of his emotions.

Looking out from behind his sunglasses with his cold eyes, he saw the city welcoming the new year. It was a new area of rapid growth and development, and as such it attracted those looking to make money in the business world. Most of them had gone home for the New Year, so the streets were only half as busy as they were usually. Those that remained exchanged jovial greetings as they passed each other in the streets, and some set off firecrackers, which had been banned by the government. They all celebrated the new year in their own way, filling the air with voices and the smell of gunpowder. In many ways, the city reflected the country itself - a mix of planned innovation and clinging to old traditions, and the greed that wanted to have both at the same time.

F.A.N.G's train of thought is interrupted as a man coming from the opposite direction nearly bumped into him. F.A.N.G's natural instinct of killing the man on the spot was swayed, as he looked up to see a drunken fellow, who smelled of alcohol more strongly than a brewery.

"Heh heh heh. Drinkin' at a time like this is the best, ain't it?" The red-faced man slurred his speech as he talked. Giving F.A.N.G a hearty pat on the shoulder, he staggered past into the distance. The man had no idea who he'd just bumped into, and perhaps ignorance was bliss. F.A.N.G let the man pass - he too had been drinking, but for completely different reasons.

F.A.N.G had learned how to survive in the underworld. The only thing that mattered was power. The power to kill, the power to plunder. F.A.N.G had gathered plenty of power of his own, and before he knew it, F.A.N.G had collected underlings and had become a very influential individual in the underworld. Together with his power, F.A.N.G commanded respect and fear. It wasn't unusual for someone who got too friendly with him to end up feeding fish at the bottom of the harbor the next day.

But despite all his power, F.A.N.G felt that something was missing. Ever since becoming an assassin, he'd learned how to survive but still felt dead inside. Becoming a leader of his organization, he expanded their influence, looking to fulfill what was missing.

And then, he found Shadaloo.

Within the underworld, there wasn't a soul who didn't know of Shadaloo's existence. They had their fingers in everything, legal or illegal, and were the undisputed king of the underworld. While this country had its own dealings in the shadows, it was nothing compared to Shadaloo. And their leader, M. Bison, sat atop the throne, controlling all of the organizations in the underworld.

It was this M. Bison that F.A.N.G challenged one day.

And lost to. Badly.

As an assassin, F.A.N.G had countless refined techniques at his disposal for dispatching enemies. None of them worked. Even his poison, his greatest weapon, was nothing compared to Bison's power. Direct attacks, sneak attacks...nothing mattered. Everything F.A.N.G had accomplished in his fight for survival, his influence within his organization...Bison ruled over all of it.

Bison personified violence, and F.A.N.G could not stand up to him.

Bison sought to rule the world using his violence. Finally, F.A.N.G had found what he was looking for - Bison's ambition. F.A.N.G left his organization and joined Shadaloo, devoted his everything to Lord Bison, and dedicated his efforts towards realizing Bison's ambitions. F.A.N.G became Bison's right hand man, and one of the Shadaloo Four Kings.

However, Shadaloo was destroyed.

Bison fell, and with him, his ambitions vanished.

With his leader gone, the emptiness in F.A.N.G's life returned.

However, F.A.N.G wasn't entirely convinced that Lord Bison was truly dead. Hoping to revive Shadaloo, F.A.N.G visited dark companies he'd had dealings with in the past, hoping to gain resources. He had once controlled these companies through power, but now a different approach was needed - to sit down and have a talk over drinks.

F.A.N.G had finished in one such meeting. Though the drinks flowed freely, F.A.N.G was unaffected. As a side effect of his unparalleled resistance to poison, there was no amount of alcohol in the world that could influence F.A.N.G in any way.