We're going to pick up where we left off last time, and talk about the damage reactions that are attached to attacks.

In addition to damage values and parameters which we talked about the last time, audio/visual information like the opponent's motion and sounds are also attached to hitboxes. It's those reactions I'd like to address. There aren't a whole lot of fighting game terms to learn, so this should be pretty straightforward.

The primary reactions that are attached to hitboxes are as follows.

The reactions for ① and ② will become more intense as the attack strength increases.

As we looked at in Hour 8 there are various states your character can be in. When an attack connects, it also contains information on the damage motion which affects the opponent's state.

Damage motions have a very big effect on the battle, so I'd like to explain things in-depth here.

Upon contact, an attack will push the opponent back. The general concept is called "pushback" - you may sometimes hear "hit back" or "block back" to differentiate, but I think the common phrasing is often "pushback on hit/block."

The pushback distance increases together with the strength of the attack. However many games lately use independent, detailed settings for even normal attacks, so fundamentally you can think that every attack has its own unique pushback distance. 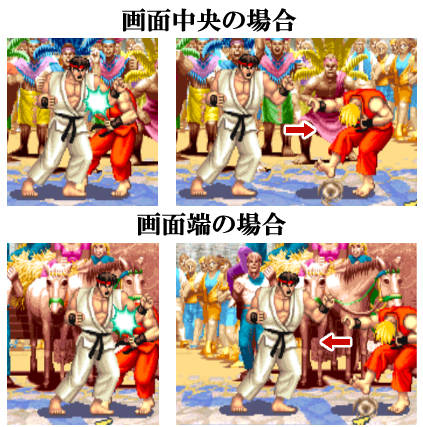 [Image Text: Center of the screen
In the corner]
The amount of pushback normally applied to the recipient will be applied to the attacker. Note Ryu's position relative to the background.


As an exception, projectiles such as the Hadoken will cause no pushback in the corner. This is pretty important, so be sure to remember it. 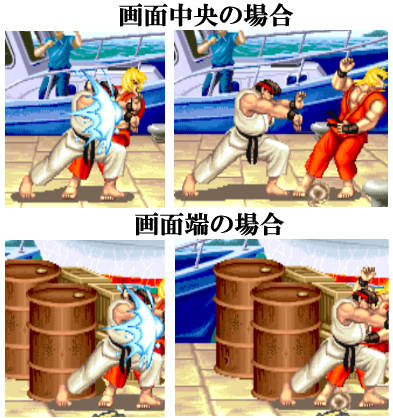 [Image Text: Center of the screen
In the corner]
Projectiles cause no pushback in the corner. Depending on the move, this could be good or bad.

Upon being hit by an attack, the character will go into a "staggered" damage state. As we discussed in a previous lecture, they will be unable to move in this state. The duration of this state depends on the attack used.

As was previously discussed, as an attack gets stronger, it also becomes heavier and more difficult to use. Those are the basics, so attacks must also deal increasing amounts of hit stun as well. Otherwise using them would put you at a disadvantage.

Similar to pushback, you should think of each attack having its own unique hit/block stun attributes.

If an attack connects, separate from hit/block stun, you may notice that both character pause for a brief moment.

This is easiest to understand if you look at it in game, but watch a move whiff. It may move so fast that you can barely see it. Now have the attack connect - you'll be able to see it a little better, especially upon contact with the other character.

This is something called "hit stop/block stop," that helps to give the player a sense of the attack hitting as well as the weight of the attack.

Additionally, similar to pushback, projectile attacks do not cause any hit/block stop for the attacker. In regards to pushback and hit/block stop, an easy way to think of it is that for projectiles don't have any physical effects for the character throwing it.

When an attack hits there are two things going on at once - the attackers' motion, and the hit stun of the character that got attacked. As these things overlap, there will be a gap between when both characters are able to move again.
The gap between which one character can move while the other still cannot is called "advantage". It is also called "disadvantage" depending on the point of view.

Let's take a look at an example visually, using the knowledge we've learned so far. 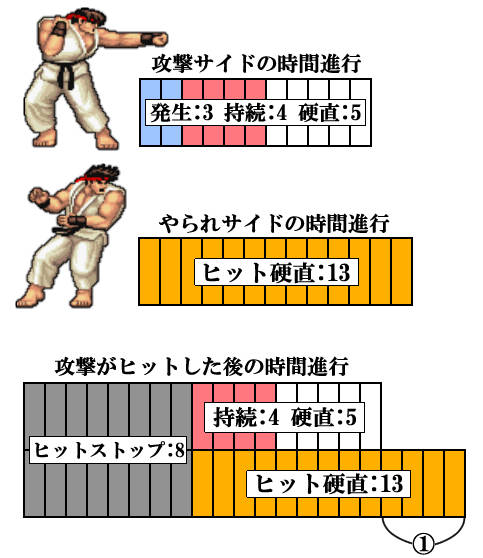 
While there is startup for the attacker, the startup does not have a hitbox and therefore does not affect the passage of time for the recipient.

When the attack hits, both sides will experience hit stop. In this example, we're using 8 frames of hit stop.

After the hit stop ends, for the attacker they will finish their remaining active frames, and then go into the recovery frames. For the recipient, they will go into their hit stun recovery.
You may be thinking "why are you calculating the remaining active frames for the attacker?" That's a good question, and I'd like to cover it in another lecture.

Note: upon the attack landing, the first active frame has already actually passed. The remaining time is calculated from the second active frame, but for the ease of explanation I included the first frame this time around.

1: In most cases "disadvantage" isn't used to talk about what happens upon hit, but it does become important when discussing the gap on block. If blocking a move leaves you at a disadvantage, it means that your opponent will recover before you do. This is important in determining what your next move will be, but that's going more in-depth into battle strategy.

As we primarily covered the elements that are a part of damage reactions, there isn't really anything to review here. It's a bit detailed and perhaps a little troublesome, but this is something I'd like you to really read and think about.