Hello everyone, Mr. Bug checking in.
Today I'd like to talk about the basic rules and knowledge you'll need in regards to controls, movement in particular.

As Street Fighter was originally an arcade game, for the most part the controls utilized a joystick and buttons control setup. As such, I'd like to utilize that setup here as well. 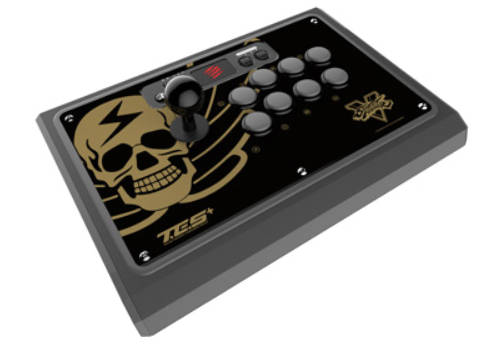 ↑This is the type of controller I'm talking about.
Note:
Though SF is originally a game that uses the joystick and buttons, you don't have to stick to that when playing at home. There are plenty of good joysticks out there now, but back in the day we weren't so fortunate, so we played and refined our skills using the controller. There are certain aspects of the game where I'm actually better on pad. 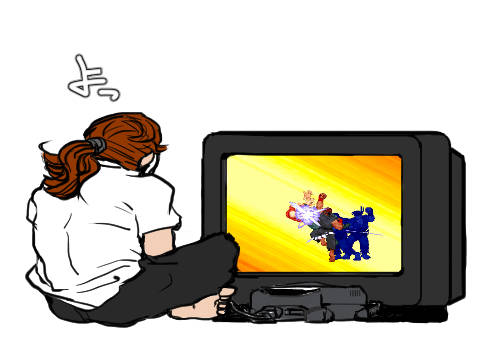 Input Devices and their Roles

Although there may be some differences between individual game systems and characters, generally speaking for the SF series, the joystick is for movement and defense, while the buttons are for attacking.

The joystick moves up/down/left/right, and the 45 degree directions in-between each, which makes for 8-way movement. 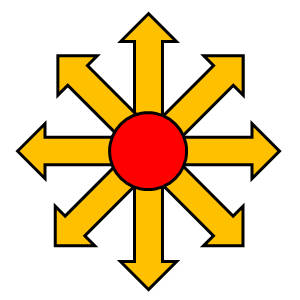 The 8 directions are indicated with arrows.
It's not analog, so you don't have to worry about 75 degree angles, or the force of the input affecting the amount of movement. Even if you do an input that isn't exact to one of the 8-movements, it'll register to whatever is closest, so you don't have to worry about extremely detailed inputs.
Leaving the joystick as-is (no input) is considered the neutral state.

Note:
Action games aren't just about pushing buttons to attack. There's also plenty of movements, such as jumping and blocking attacks. However the first Street Fighter game had a pretty unique cabinet*1 setup. 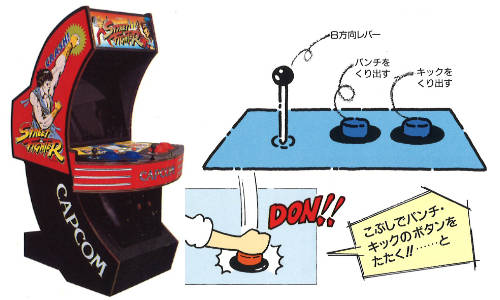 There was a punch and kick button, and the force of how hard you hit them determined the strength of the attack. It simplified the attack process and you could go all out with your button pressing. In order for the game to be played in regular cabinets with regular buttons it was changed to the 6-button layout that we're all familiar with now.

There are a lot of buttons to press in SF games and it can certainly seem daunting, so I think it's best to narrow it down at first. This is something I want to address later in a lecture about how to start the game, but essentially you can start off by learning the fundamentals of a single button. In some games, you can fight somewhat normally with even just that one button.

While there are a lot of things you can utilize, which makes it difficult to master, when you gain a deeper appreciation of the depth of a certain button and can start using it regularly, it makes things all the more interesting.


The Basics of Universal Movement

First let's take a look at the basics of movement using the joystick.
The diagram below illustrates the movement possibilities upon joystick input. 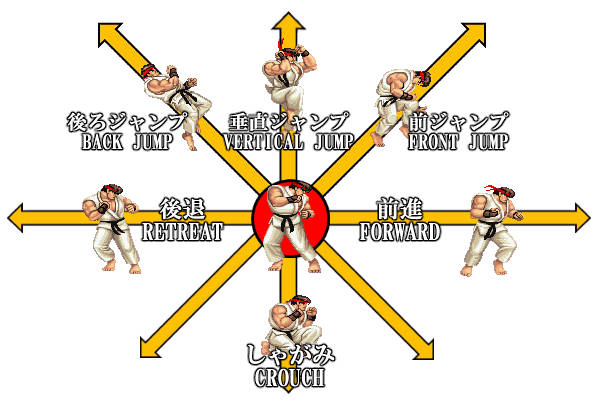 As you can see, inputs except for the down directions will move your character in some way. These elements will all connect to the explanation regarding defense, so let's take a good look at them.

Input the joystick forward or backwards, and the character will walk. We call this forward and retreat, or walking forwards or backwards.

The things I want you to remember in regards to walking are...

-- You're not defenseless while walking.
-- Characters have different walking speeds.
-- Walking backwards is usually slower than walking forwards.

Walking may not make a huge impression on you, but it's of the utmost importance.
You can tell how good a player is just by watching them walk.
Walking is the movement method in which the most detailed adjustments take place, making a deep part of the game that is hugely important.

Input the joystick upwards to make the character jump. A straight-up input results in a "neutral jump," diagonal-forward results in a "forward jump," and diagonal-backwards results in a "backwards jump." Those are the basics, but there are other names for jumps that I will address later in the notes.

The things I want you to remember in regards to jumping are...

-- Jumping distance is fixed, and you cannot change your jump arc in mid-air.
-- Jump height, distance, and duration changes depending on the character.
-- You are basically defenseless during a jump.

This may change depending on the game and the character, but these are the basics.

While jumping is something that's high-priority for attacking, in SF you can also think of it as a very risky defensive movement as well.

Input the joystick downwards to make your character crouch.
Crouching is an important part of defense, which we'll talk about in the defense article, but for now, let's just leave it at - even if you input diagonally down, your character ultimately crouches.

Up until now we've been talking about single directional inputs, but there are cases when you'll want to make more than one input. While this is something that wasn't in SFII or the SF Alpha series, it's been around since SFIII and is probably here to stay. And that is...

Make two inputs directly forwards or backwards and the character will perform a quick movement. Forward is forward dashing, while backwards is back dashing. In Japan this is sometimes called stepping, or just "step."

The things I want you to remember in regards to dashing are...

-- Unlike walking, you are vulnerable while dashing.
-- Dash speeds and distances differ by character.

The fundamentals of dashes are that while it's a way to quickly cover ground or retreat, you also take on the risk of opening yourself up to attack.

While back-dashing will often have invincibility frames or can serve as an evasion maneuver in various games, here I'd just like to talk about the movement properties. We'll address those other things at another time.

Additionally, if you quickly input down and then up, your character can perform something called a high jump. However the only SF game in the main series to utilize high jumps was SFIII, so as much as it pains me to do so, I won't address it here.

Learning the Lingo: Types of Jumps

Neutral Jumps: Can also be referred to as vertical jumps. I feel like "neutral" is used more. You may hear things such as "use a neutral jump to avoid fireballs" or "do a vertical jump to observe the situation."

Forward Jumps: A lot of people just call this a jump. So it's one of those things where you're going to have to pay attention to the context of how it's used. You may hear things like "stop jumping at your opponent" or "use a jump to get in."

Backwards Jumps: Back jump, but some people also call it a runaway jump since it's primarily used to put some distance between you and your opponent. So you might hear "chase down his runaway jumps" or something like that.


That covers the basics in regards to movement. See you again soon!