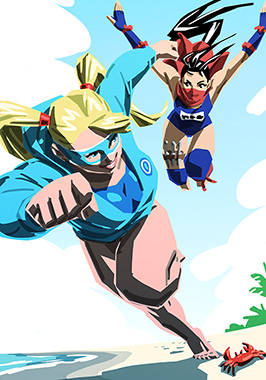 Ibuki and Mika are summoned by Karin to the Kanzuki private beach resort. However Mika, eager for some intensive training, decided to forgo the limo and walk to the resort...

Ibuki's defeated gasp earned her a sidelong glare from Rainbow Mika. The two wandered along the hot, sandy beach with the summer sun of the southern isles beating down on them mercilessly.

"Why did I think showing up in my work clothes was a good idea...?"

Ibuki's latest client, Karin Kanzuki, had suddenly called her out on a "job." Before she knew what was happening, she had found herself on a private jet bound for the Kanzuki family's private southern resort island.

"If she'd just explained in advance, I could've at least brought a decent swimsuit!"

Ibuki's usual ninja gear was a strange sight on the picturesque beach. She had brought a swimsuit... but in her rush to get ready before the jet departed, she had accidentally packed her old standard-issue high school one-piece.

Drab.
Depressing.
(Tighter than it used to be.)
And besides...

"This beach is too danged long! How far do we have to walk!?" Ibuki complained.

Mika rolled her eyes at Ibuki's constant complaining and ground to a halt.

"Then why come along in the first place? You should've ridden in the limo that Shibazaki provided!"

Ibuki had wanted to ride in the limo with the other guests, but one look at their fancy, expensive clothes was enough to make her second guess herself.

Ibuki pouted and fired back at Mika,

"Why didn't you take the limo, huh!? What's the point of taking the scenic route!?"

"To run the beach, of course. Haven't you heard of intensive training?" Mika proclaimed proudly.

"Wait wait wait. We're on a BEACH resort in the southern isles. And you're TRAINING? Are you nuts!?"

Mika did not look out of place on the beach, even in her wrestling gear. The bikini-like costume caused no one to take a second look at Mika, unlike Ibuki in her ninja getup. In fact, Mika looked positively at home on the sun-kissed sand.

"There's nothing odd about it. Real strength is about taking any opportunity to train!"

Mika threw out the remark casually, but behind the mask her eyes were narrowing.

"Of course, no amount of intensive training would make you as strong as me...so I don't expect you to keep up."

Ibuki usually kept her temper under control, but that was too much to bear from an overblown cosplayer.

"So you think packing on a few extra pounds of muscle is all there is to strength, huh? What are you, a protein shake infomercial?"

"Hmph. Big talk for a loser in the making."

There were audible cracks and pops as Mika rolled her big shoulders as a warm-up. Ibuki strode over and poked Mika in the chest.

"If you think a wrestler stands a chance against a ninja in a beach race, you must have taken one too many piledrivers on that thick skull."

And with that, Mika kicked the sand hard and sped away. Ibuki got a face full of sand.

Ibuki was about to call that a cheap trick, but Mika was already some distance away, moving at high speed. Ibuki spat out the last of the sand with a grin, thinking, You took a ninja by surprise... Not bad! But...

Ibuki set off at her usual training pace, which to the average person looked as swift as the wind. Her feet were a blur that barely scuffed the sand, and though Mika was powering along like a musclebound torpedo, Ibuki drew up alongside her in the space of a few breaths.

For all her strength, Mika's sprinting form left her wide open. Ibuki couldn't help herself; she darted in and chopped at Mika's side.

"Why, you--!" Mika shouted and tried to floor Ibuki with a clothesline lariat, but the ninja tucked under the clumsy attack and sprang forward into the lead.

"So much for intensive training!" Ibuki giggled.

There was nothing faster than a high-school ninja girl. Ibuki let her feet carry her over the water, where she dashed across the surface without ever sinking an inch. The salt spray was the perfect relief from the blazing sun.

As the beach curled around the headland up ahead, the Kanzuki private resort finally came into view.

All she could think of was reaching the resort, grabbing a cool drink and taking refuge under the canopy on the beach. She thought of putting her feet up and relaxing...and suddenly there was a passionate battlecry from behind her.

Ibuki glanced back over her shoulder to find Mika hurtling through the air toward her for a flying body slam. Ibuki instinctively tried to dodge away, only to lose her footing on the crest of a wave.

Mika crashed into Ibuki with tremendous force, sending the two tumbling into the ocean.

A picturesque rainbow formed over the ocean, and as Ibuki rose from the waves, an exhausted Mika washed ashore onto the beach.

"You've got wrestling on the brain!" she giggled.

When the two first met, Ibuki figured that wrestlers were all obnoxious muscleheads, but now she knew better. Underneath the mask gimmick, Mika was just a normal, pretty girl, albeit with an unusual career choice. Nevertheless, they couldn't get along as regular girls. Mika would badger her relentlessly to start weight training, and it would end up in another pointless fight.

But despite Mika's tendencies, Ibuki found herself growing fond of the wrestler; one of them fought in the spotlight, the other from the shadows, but the determination they shared somehow made them see eye to eye. But...

I'll never be able to lead a normal life if I keep hanging around with weirdos like this, Ibuki thought as she offered Mika a hand up out of the water.

"Hm? Did you say something?" said Mika, her face rosy from the exertion of the run.

A high school ninja and masked pro wrestler, strolling along the beach side by side. Who would've figured?
Side readers : 03 「Unexpected Guests 」（Part I）