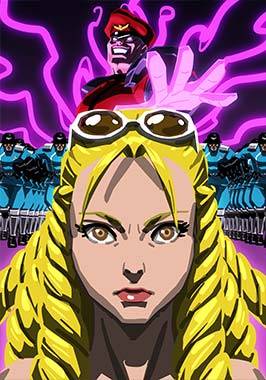 A Shadaloo plot unveiled within Karin's organization has interrupted her precious rest. As head of the Kanzuki family and a world-renowned fighter, what will she do?

Stretching out on her chaise, Karin let out a troubled sigh. Shadaloo...again, she thought. Her stormy expression was at odds with the sunlight glaring off the beach's white sand.

Shadaloo's presence in the world was phantasmal; always present, seldom exposed. Since the Kanzuki family was engaged in business ventures across multiple sectors, the pervasive anti-social influence of Shadaloo made it inevitable that their paths would cross sooner or later, but to find their components in the Kanzuki satellites...this was no mere coincidence.

Karin had had her share of run-ins with Bison, Shadaloo's leader, in the past. She had even fought him fist to fist. Like a venomous serpent, he was infamous for attacking without prejudice once he had his prey in sight. There was a chilling lack of emotion to his actions; no cynical pride, no joy of the hunt. Only an animal's primal desire for killing.

Shadaloo's meddling with the Kanzuki satellites seemed to follow the same pattern. There seemed to be no desire to battle the Kanzuki family; Karin would have known it if they were winding up to an all-out attack. Bison had merely noticed a weakness, and decided to prod it without a second thought. Used power for power's sake. It reeked of a tyrant's callous cruelty.

The Kanzuki clan despised the use of power for oppression. Just thinking of the mind behind this sabotage left a bad taste in Karin's mouth.

"Brandishing power like a bully with a toy sword... How vulgar."

Her eyes half-closed, Karin mumbled to herself with steeled determination.

"Shadaloo... It's time you learned how the Kanzuki family handles business. We'll see how your petty malice fares in the face a true leader."

Karin's sly smile would have struck fear into many an enemy.
She felt her righteous power unfold from her like angel wings, oft-folded but always yearning to soar.

But the moment collapsed as someone gasped in surprise. Karin opened her eyes to find a fiery glow of power fading around her as she let her concentration dissipate. There was a maid there, pale-faced, sheepishly holding a drinks tray.

Karin shrugged, thinking, I must have startled the poor thing. She reached for the glass, took a sip and began to drift off again. It would be so easy for the Kanzuki family to become another Shadaloo, she thought. And that is exactly why I must stay strong. I must stay the course.

It is all too natural for leaders to fall prey to their desires. Power begets power, wealth begets wealth. Soon enough, the difference between good and evil becomes a moot point, and leaders become power-craving monsters, just as Shadaloo has become.

If I lose my way, and power consumes me, the influence the Kanzuki family wields will only ever serve nefarious ends, Karin thought to herself. I cannot allow that to happen.

Karin raised her fist into the air and stared at it. Beautiful, graceful, but not just for show. This is my weapon... This will keep me on the path of righteousness, she thought. Where Karin fought, there were no rules, no bells, no rings or referees. She was a street fighter...and perhaps that merciless world was even more important to her than the tranquility of the resort.

Karin let out a girlish giggle as she recalled a former classmate that brought her into the world of street fighting. A girl with a clear vision, an open heart, and strength that rivaled Karin's. Her heart leapt as she played out the fights they had in high school in her mind.

"Perhaps I'll pay her a visit once I'm back. She must be lost at sea without me to keep her on her toes."

Any excuse to mingle with the commoners is good for business. I can say that I'm simply dropping off some souvenirs from the resort, Karin mused. And then I'll challenge her to a street fight, just to make sure she hasn't fallen behind me. No doubt she'll be easy to bait, just like in high school.

The breeze ambled along the beach, carrying the soft crashing of the waves and extinguishing all thoughts of Shadaloo from Karin's mind.