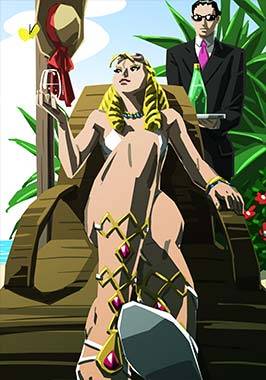 Karin Kanzuki, the young, beautiful head of the Kanzuki estate, escapes the rigors of leading a global super corporation by relaxing in her private summer resort.

A spray of summer sunlight painted the water gold. Beneath the surface, a slender silhouette tamed the water with all the natural grace of a dolphin. It slid along one edge of the pool and broke out into the light, scattering crystal-clear droplets.

Karin, only her head visible above the water, pursed her lips and let out a sigh. Here she could let her hair down, let it cling wetly to her in chaotic blond swirls. She closed her eyes and felt the warm tropical sun kiss her face. A drop of water ran down from Karin's scalp to trace her perfect cheek.

After a time, Karin opened her eyes and smiled up at the endless blue morning sky. Great weather, peace and quiet, the Kanzuki private resort really had it all.

With a quick, efficient kick, Karin hopped out onto the side of the pool, where her maids stood waiting with towels.
This entourage flanked Karin as she crossed the hot flagstones of the patio, drying her hair and heading toward the balé, an open-walled hut with a palm thatch roof that Karin adored for its exquisite view of the beach.
She dried off quickly; not from the sun, but from the maids who deftly toweled their mistress as she walked.
Once in the shade, Karin whirled her hair into style with a practiced flourish.
Though forced to tie it in a simple ponytail for the formal duties required of her station, Karin took any opportunity to go back to her signature ringlets, the honey-blond curls she had worn since high school.
The balé provided blissful relief from the strong southern sun.
Karin stretched out on a chaise-longue, legs crossed casually among the cushions, her back sinking deep into the chaise's softness.
A chilled Citronnade in hand, Karin closed her eyes and indulged in the sounds of the crashing waves. Her worries, anxieties, everything was whisked away into a little box to be opened for later, leaving only a moment of satisfying nothingness.

Time was not a luxury Karin could often enjoy.
Time made no exceptions, not even for the bold leader of the Kanzuki family; responsibility was a burden that the powerful could never truly shrug off.
But Karin viewed these sparse moments of relaxation, these opportunities to clear her mind, as valuable assets.
Another check-box on the regimen of maintaining a sound body and mind.

"Really? Now?"
sighed Karin as approaching footsteps intruded on her silent time.
The Kanzuki family did not hire servants so foolish as to interrupt the mistress with trivial requests, so the measured, disciplined footsteps no doubt signified something important.

"Shibazaki, I instructed you not to interrupt me." Karin said, her eyes closed and her voice coolly frustrated.

"My apologies, Miss Kanzuki, but I believe this matter requires your immediate attention," Shibazaki said apologetically. He handed Karin a dossier containing a tablet.

"Indeed," Shibazaki said. His tailor-fitted suit was a stark contrast to the sand and palms of the scenic resort.

"We have detected that a subsystem control chip is displaying some...unintended behavior."

Karin raised an eyebrow in suspicion. Shibazaki would not have come out here just to tell her about a malfunctioning component, especially during her vacation.

"We attempted to manufacture Red Spider Lily #3 completely in-house, but one subsystem utilizes outsourced parts.
The chip in question comes from Y Technology, who we've partnered with since the first Red Spider Lily project."

Karin scanned through a document on the tablet as Shibazaki gave his report.

"This list of Y Technology's owners... There's one company I don't recognize."

Shibazaki peered over his glasses and answered gravely.

"Indeed. We noticed stocks of Y Technology were purchased indirectly via a number of investment funds, so we investigated. There was a connection."

Karin combed through the report. "Shadaloo!?" she exclaimed.

The infamous organization was a shadow lurking behind the international economy, with covert connections to untold numbers of corporations.
Shadaloo had a long history with the Kanzuki family, all of it bad.

"Do you mean to tell me that Shadaloo have managed to sneak their way into our work?"

"The chip is still being analyzed in the lab, but it appears they have created a backdoor into our satellites."

Shibazaki's statement was delivered in a calm, collected tone, but the implications were enormous.
Karin inhaled deeply and settled herself back into the chaise.

"I want that chip reverse-engineered; have copies manufactured and analyzed.
I'll expect a build schedule on my desk tomorrow.
Dismantle and analyze every other outsourced component, and reinvestigate every company we're dealing with."

"As you wish." Shibazaki bowed his head in agreement, and hurried off to execute his mistress's orders.

As Shibazaki's footsteps receded, Karin closed her eyes. She wouldn't be getting any peace today.