Side readers : Musings on a Still Night (Part 2) 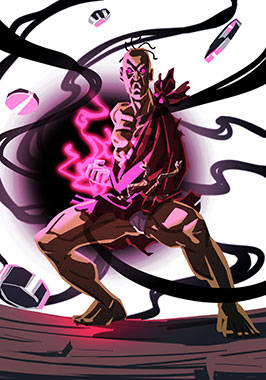 As Oro and Dhalsim mused about the dangerous power that fighters wield, Oro state of mind took a drastic change.
The Satsui no Hado began to swell up, and wrapped around the old hermit as he suddenly confronted Dhalsim with evil in his eyes.

Even if he and his guest, so tragically deceived by the Satsui no Hado, must kill each other in the same instant.
The decision sharpened his awareness, marshalling all his senses.

In the stifling presence of certain death, Oro drew closer to Dhalsim with only one thing on his mind.
Even the tiniest move would mean the difference between life and death.
Dhalsim's nerves tingled with agonizing dread.

His consciousness transcended flesh.
He was one with the world.
Utter silence.
The wind had died.
Only the thick smell of Jasmine remained.
A trickle of sweat rolled down Dhalsim's cheek.
Time.
Sto--

The old hermit released his fist with a casual chuckle.
The dark Hado that had drawn such ultimate malice to Dhalsim's doorstep vanished without a trace.

"That was the Satsui no Hado. Well, an imitation."

Dhalsim gasped in relief, and wiped the sweat from his brow.

"Old man, please don't surprise me like that again."

Oro just smiled as if nothing serious had happened. Only his eyes showed what they both knew; that he had been overflowing with killing intent until the moment his fist had unclenched, and Dhalsim had been serious about killing him first.

Oro swiveled on the ball of his foot and leaned out against the porch post.

"Psycho Power, Ki, the power of Yoga, the Satsui no Hado."

And Soul Power too, Dhalsim added silently. Oro closed his eyes and rested his chin on his hand, muttering.

"You know what I think? These powers are all the same, when you follow them to their root."

Oro raised a finger, and continued his thought.

"I do not claim they are completely the same. Merely connected. The same, but different."

"Yoga and the Satsui no Hado are not the same."

"Oh? And yet, think of the water's surface, and the underside of that surface."

Oro waved the palm of his hand, mimicking rippling water.

"Fishes are in the water, birds soar above it. However, if you think about it from their perspectives, the water's surface is the same, is it not?"

The same, but different. Dhalsim considered it a Zen-like question with no real solution.

"Yes, in a way it is the same. But each surface is different."

"The water's surface is simple, upper and lower, merely two sides. But the boundaries between this," he gestured around him, "this world and others cannot possibly exist in two dimensions. If anything, I would call them... a Calabi-Yau manifold."

"Cala...bi?" Dhalsim answered. It was sometimes hard to follow the hermit's thinking.

"Forget Calabi-Yau. What's important is that there is not just one boundary between this world and the next."

Dhalsim pursed his lips in thought and crossed his long arms.

"Ki techniques, Psycho Power, my own Yoga Power...they come from the same source of power, but the ways we achieve that power, and rise above our limits, are different?"

"Exactly. With training, we fish too may fly."

In my case, I actually can fly, Dhalsim thought with a smile. He considered the unique "boundary" that he crossed to utilize Yoga power; that of stoic training and devotion to Agni. He began to understand the old man.
He could see how endless physical training pushed other fighters across their boundaries to attain ki powers, and how even the abominable Psycho Power and Satsui no Hado had their own boundaries, and their own methods to cross them.

"So the real question is, what power is at the root of all these things?" Oro asked, and pointed to the ground at his feet.

"Take for example this planet. It spins at five hundred meters per second. In that same time, it travels 30 kilometers in its orbit. Space is not standing still, it is always moving. And yet normally, we are oblivious to it."

Dhalsim understood this implicitly. He thought of his Yoga training; how through meditation, an insignificant human could be connected to the infinite vastness of space.

"I begin to see your train of thought..." he said.

The hermit closed his eyes and spoke quietly, his words mingling with the breeze.

"Yes. Power itself is neither good nor evil. Even in the case of Psycho Power, or the Satsui no Hado."

His final point he left unspoken; that labeling a power as evil only invites errors when working to suppress it.

But Dhalsim was unsatisfied. He knew this explanation lacked true depth, and wondered whether the old man had glimpsed some greater truth beyond what he had revealed.
Could it be? Had he found the source of Psycho Power? The source that fueled Bison and all the evil works of Shadaloo?
... Did he know how to cut off that power at the source?
If so, could this old hermit be the one to finally destroy Bison?

Oro chuckled as if Dhalsim had asked the question out loud.

"My days of crying good this, evil that, and acting like I can save the world are long behind me."

It's up to the likes of you now. Oro's meaning was not lost on Dhalsim.

Learn to approach the source of power. And use that knowledge against those who rise, again and again, to use that power for evil.

Dhalsim knew then that this knowledge must be passed down through the generations, as Oro was now passing it to him.

As Dhalsim's thoughts drew to a close, he put his palms together before his chest; not in a combat stance this time, but as a gesture of respect to the master before him and the great power he represented.

The last of the afternoon's warmth was brushed away on the wind, and the insects resumed their nightly song.
Next time
Side readers 02
Queen's Resort (Part 1)