After final fight, what was the team atmosphere like when you were starting out on Street Fighter II?

It was easy to get started, Final Fight had been a huge success.

How did you decide the character designs?

We had a base plan that I had written before Final Fight, but mostly each member brought their own design to the table. We drew up a list of countries and fighting styles and paired them off. 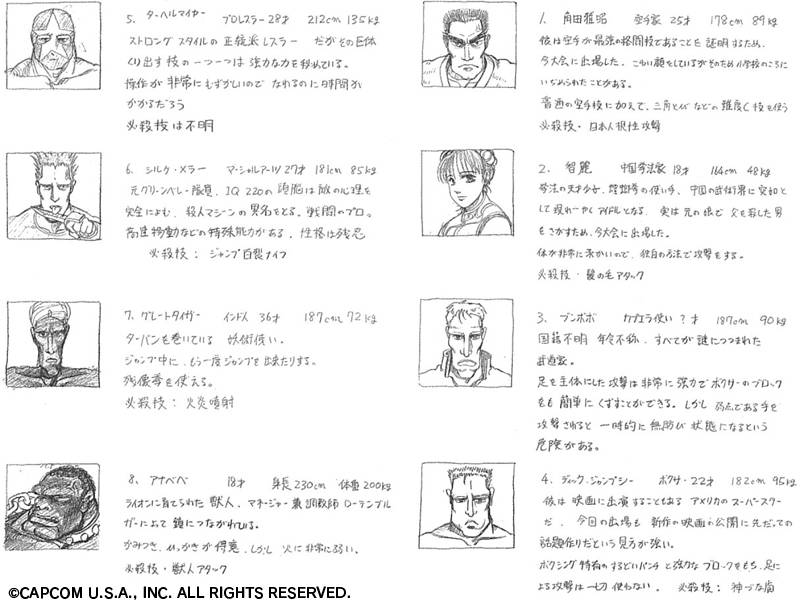 I once spoke to the guy who designed Vega, and he told me you had asked him to do something with Spain and ninjas...

That's right! (laughs) That's all that was left, Spain and ninjas! Nishitani thought it was really fresh so we rolled with it.

That's how you became a director of design then.

Yes, but it was a collaborative effort. Blanka had a normal skin color once upon a time.

We already had him as a sort of beast but we hadn't yet settled on a color. He would have looked pretty weird if he were a normal color right? So we all got together and went over a few options, and as soon as the green version came out we knew it fit.

That's an interesting back story.

Edmund Honda's colors were also really light originally, I had the colors gradually deepen each time we went over the sprites.

That's how most of the design decisions were made, we just got together and had a good time.

Oh yeah, Chun-Li was wearing pants right up until the very end. When we made the sprites I thought she didn't look right, so I had them changed to tights instead.

Ah! Thanks for ditching the pants then.

Every single character was tweaked, almost to an obsessive degree.

When we were making Chun-Li it was a really busy time, and the deadline for the Street Fighter II poster was looming.

I also had to make the poster for Magic Sword1.

And on top of it all I was the section manager, so I had training to do as well, it was a tight schedule. 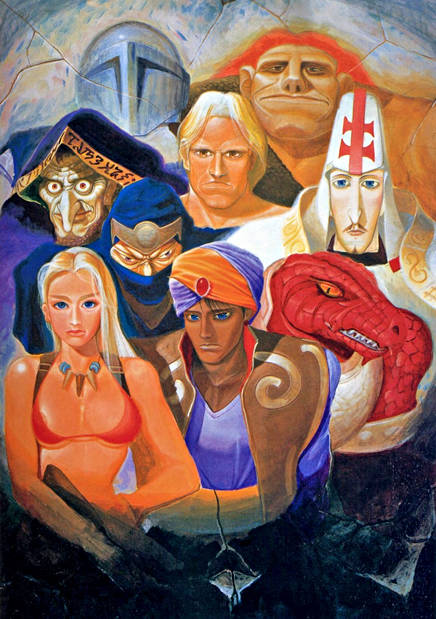 A side scroller released in 1990. You control Alan as he climbs the tower of the dark lord Drokmar.

Yeah (laughs). There was less and less time to finish Chun-Li, and at the very end we only had 5 weeks to make her. I was worried she'd end up being sloppily designed, but she was really well received when the game was released.

The original plan was to have her take up 2.8Mb, but the other characters were gradually taking up increasing amounts of space. I eventually had them shave off some of the others in order to stick to the plan.

It's great to be able to know her history.

To change subject, were ideas for the special moves submitted at the same time as the characters themselves? That's how we did it for Street Fighter V.

Er...I can't remember (laughs). I think each character's designer did their own thing, and I tweaked the final designs.

I stepped in for certain things like Sagat's Tiger Uppercut, which originally had 11 frames and was way more than necessary.

Thanks to my experience on stuff like Final Fight I had a good idea of what was and wasn't necessary when it came to frames. Chun-Li also had the same treatment.

Sure, what is it?

Good question. Back then I felt that Thailand was home to the strongest fighting techniques in the world. After being inspired by a certain manga, I thought to my self what if an evil organization used their funds to create a fighting empire of sorts?

I also wanted Street Fighter II to be more entertaining than its predecessor.

That also helps explain how Chun-Li came to be. Having a female character in the game completely changes the game's dynamic, she brightens up the entire palette. We needed a reason for her to fight, and so an evil empire came to mind.

I think it was Nishitani who was particular sold on the evil empire idea. There was also heavy influence from "Enter the Dragon".

The first time I saw Bison on screen he was smaller than I'd expected.

I think his bulkier Street Fighter Alpha sprite was really cool, although he did lose some of that "otherworldlyness". 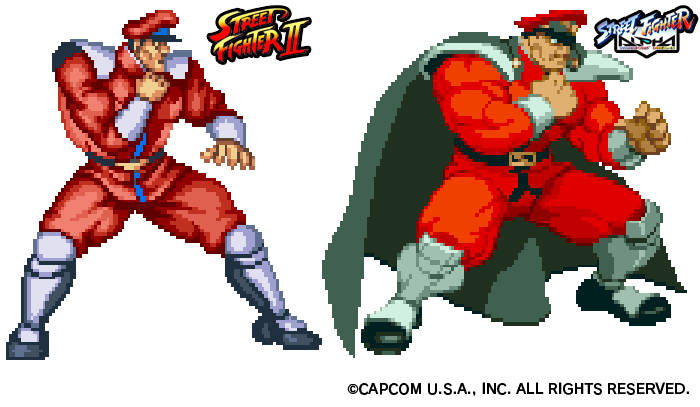 Sagat's the same, his almost skeletal appearance makes him scarier. That low kick has got to hurt.

That's right. One of the things I liked about him in Street Fighter I was that even though he was pretty bony, he still had a huge torso.

Nishitani decided a lot of the details like each character's height. They were slightly shortened to make them more realistic and relatable.

Personally I thought they would have been better if they were bigger and more heroic.

I made sure that the sprites had a lot of width, I didn't want them being too thin.

At that time the sprites were all made using the keyboard right?

Yes. Hang on, you mean you didn't?

I used a mouse.

Really? As everything was in hexadecimal2 we used the 0-F keys and the arrows to make the sprites. There was this one guy who made a complete racket mashing away on his keyboard. He used to do overtime and didn't even sleep, so we'd all have no choice but to stay awake and keep working as well (laughs). We felt like we were making history though, so it was pretty fun really (laughs).

You mentioned it a little earlier, but you weren't only making the sprites were you? You also made the posters.

Oh yeah, the reason I made the posters is I thought it was important that they were drawn by someone on the inside, someone who knew the game inside out. I also wanted it to look like we needed more talent, I wanted to attract more people to help us to make more great games.

You really took that task head on!

Yeah. Capcom's booth at one of the game shows was a total ghost town one year, I swore to myself I'd do everything it takes to get our name out there and take on the other game companies! That's what went into my posters.

After Dash (Champion Edition in the West) and Turbo, Super Street Fighter II was released as a major update, tell me a little about that.

I said we needed at least 4 new characters or it'd be pointless. Even though it was my idea, I had a lot of difficulty coming up with Fei Long and Deejay. Still I was so engrossed that I stayed at the office for 2 months straight.

Also the guy responsible for Blanka had quit so I had to make his sprite too.

Cammy was made by the same person who created Sagat and Morrigan. Most people had trouble with the stationary and walking animations so most of those were done by me too.

For some reason I thought the game should be more serious compared to Street Fighter II, so the characters weren't perhaps as interesting as the original roster.

Make sure you make some changes to Fei Long if you add him to Street Fighter V, got it? (laughs)

Let's see...I also wanted the character select screen to be the be-all and end-all of screens.

It was a huge step up from the previous titles!

Yeah, but under orders from the boss another person (Yasuda's ex-wife) swapped out Chun-Li's eyes.

I was completely livid, I told them to go to hell and stormed out of the office. 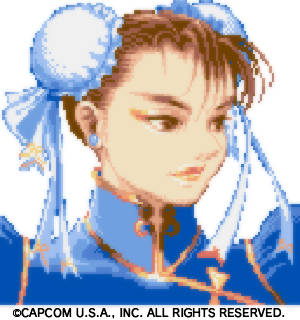 How was Street Fighter Alpha?

I wasn't involved that much, but at the time I thought it was on the wrong track and was pretty angry (laughs). When they explained the reasoning behind their decisions2 it made sense, but Honda and other characters weren't there, and it felt like it was being influenced by games made by other companies. To top it off it was recycling some of the old animations, which ticked me off too.

2The game was developed during the transition from the CP-1 to the CP-2 boards, and was designed to make use of the remaining stock of older boards.

Still, some of the younger guys started taking more leading roles so that was one good outcome.

After that experience I made sure to follow the development of Alpha 2 more closely.

I also was able to create Sakura so I was pretty satisfied overall. She was axed after I had handed her over to the team for some reason though, I went nuts.

I went and sulked under my desk for a while, when my boss unexpectedly passed by and said "Hey, that's a really cool design!", and Sakura was resurrected.

And now we come to Street Fighter III.

I think everyone hated my guts during Street Fighter III.

I think I ended up shirking my responsibilities, I had taken on so much work that I was completely buried.

I had to do character design, design direction, manage the team, learn the latest technology, all while trying to maintain a high level of motivation.

I see, you were stretched too thin.

Yeah. As games evolve they get harder to develop, and I ended up biting off more than I could chew. At least there was work to do, that much was true.

It was around then that they began to tell me that my responsibility was to develop the skills of my subordinates, so I began to think I should just quit.

Some time around then was when Chun-Li appeared in Third Strike...

Right around then I was working on Star Gladiator3. I ended up being assigned Chun-Li's sprite, which for me was kind of depressing, it meant that no one else wanted to. At least I was told I could do what I wanted to, so I put a ton of time into her although that caused a lot of trouble for other things. 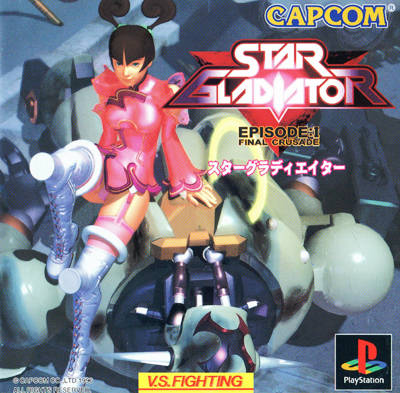 A 3D fighter released in 1996. The game used a joystick, and horizontal slash, vertical slash, kick, and guard buttons. Plasma Combos can be unleashed using specific button sequences. Plasma Revenges allow to counter an enemy attack, and Plasma Reflects can deflect them. The image is from the manual rather than the box, because June is cute.

You were sent to the States after that...How long were you there for?

3 years, I wanted to go back as soon as possible (laughs). And when I did, I went freelance.

How long has that been now?

Congratulations! I'm really honored to have been able to talk with you and discuss work over the years.

I'm also happy I can still work for Capcom on stuff like Street Fighter artwork!

I'm sorry to have to do this but please let me shill my own title now. What do you think about Street Fighter V? I heard you even bought an arcade stick!

I'm not that good, but it really is a beautiful game to look at. I thought it was a little gaudy at first, but the more I played the easier it was to understand. It's simply a fun game. I didn't play IV so I can't comment on the changes though (laughs). Graphically it's a huge step up.

It might just be me, but I feel like this game has a lot of potential, it has a bright future. I really want to contribute as well somehow, it's like a huge ship that's about to set sail.

And Mr. Chairman, if you're reading this please consider raising the tournament prizes! Make them the largest prizes around! I want people to think "Is Capcom crazy??"!

And before I knew it we'd spent around 6 hours just talking, there's a whole ton of stuff I can't write here! Akiman, thank you so much!