Hour 14: The Basics of Combos: Cancels

Hour 14: The Basics of Combos: Cancels

In this lecture I'd like to talk about cancels, a very important aspect of combos.

As covered in the previous lecture, the air combo system tends to change with each game, so the techniques I'm going to talk about here are essentially for grounded combos. 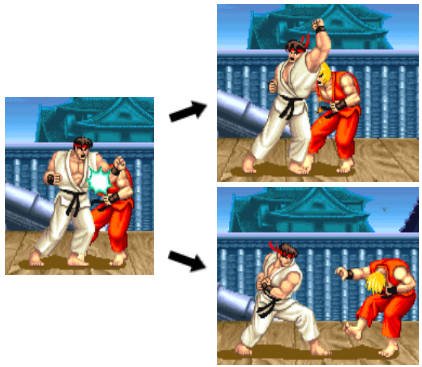 Overwrite the remaining motion of the move with the special move.

Though this differs by game, generally speaking, you can't cancel any part of the normal move - you can only cancel the moment the normal move hits. If your input spills over into the recovery, then the cancel won't come out.

Just hearing "it'll only come out the moment the normal move hits" makes it sound a lot more challenging than it actually is. "The moment the normal move hits" includes all of the hit stop time, so while that depends on the move, it's not like the timing is super-tight. So perhaps a better way of thinking of it is - special move cancels are performed during the hit stop. The longer the hit stop, the more time you will have to perform the special move cancel. As such, heavy attacks are easier to cancel than light attacks.

These cancels aren't something that was originally planned to be in the game. The original plan was to let special moves overwrite normal moves in order to make it easier to perform special moves. However, there were some moves with a startup that was faster than the overwrite time, and in these cases, the move would hit and then the special move would overwrite it. We felt that was interesting, so it was left in the game, and cancels were born.

While the moves that can be canceled are limited, you can perform any special move from the cancel. For example, Ryu's crouching MK is a cancelable move, so he can cancel this into Hadoken, Shoryuken, or Tatsumaki Senpukyaku.

To briefly sum up the fundamentals...


Sometimes these fundamentals may change depending on the game - for example, a game where all normal moves are cancelable regardless of whether or not it hits - but let's just leave that at being particular to that game.

Canceling an attack that doesn't hit with a different action is called a kara cancel, from the Japanese word for "empty." These cancels aren't just limited to normal move -> special move, and include other actions.

The Crouch MK is kara canceled before it hits.

You might be thinking - what's the point of canceling it before it hits? Well, for the hardcore players, this type of cancel has various applications. But this is getting into more advanced stuff, so for now let's just leave it at that.

There are some normal moves where the recovery of the attack can be canceled into the same attack. These are generally light attacks, and this is called chain (renda) cancels. 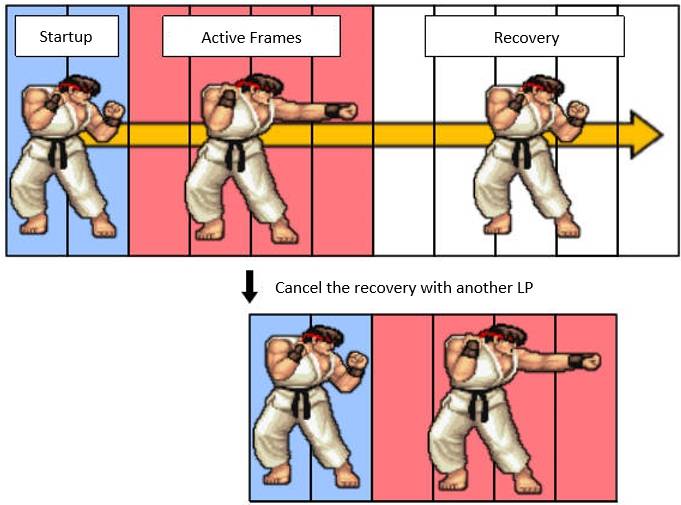 With no recovery, chain cancel moves are pretty fast.

Similar to regular cancels, only predetermined moves can be chain canceled, and compared to special move cancels, the cancel window is usually a lot more lenient.

There's a lot more involved with chain cancels, but getting into that territory things start to become title-specific, so if we just focus on the fundamentals, the important thing to take away is - the only move where its recovery can be canceled into the same move are light attacks, and this is called a chain cancel.

Recently, more and more fighting games have been featuring systems that utilize some sort of cancel mechanic. Since this is all derivative of the special move cancel component, I think getting a good grasp of cancel fundamentals will have you better prepared to deal with these systems.

It might be a bit difficult to visualize how cancels work based just on an explanation of their components, so in the future I'd like to do a supplementary seminar on cancel tips, including the actual application of special move cancels.