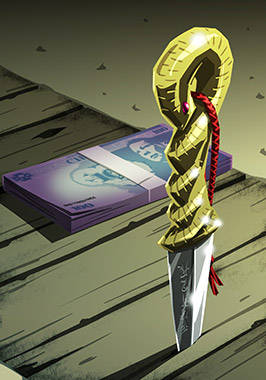 As F.A.N.G wanders along a city street, a young woman calls out to him.
He sees something in the poor woman's eyes that reminds him of the past...

Upon hearing the voice, F.A.N.G stopped. A young woman stood in a small, dark corner of one of the city streets. Similar to an assassin, she was a worker in one of the other oldest trades in human history. It was a scene familiar throughout the world - though it was illegal, it was not rare to see such women using the streets for their trade.

"You got some cash? Would you like a massage?" The woman glanced up at F.A.N.G. She looked poor, her dress clinging onto her wiry frame. She smiled, an insecure and unpracticed smile spread across her face devoid of makeup. She gave off the impression of an amateur, a woman who felt out of place standing on the streets.

F.A.N.G glared back at her, but ultimately decided to accept her offer. He wasn't drunk, and another side-effect of the poison was that he no longer felt that sort of animalistic desire. However, there was something about this woman that intrigued him. Those pure black eyes that stared directly at him, it reminded him of eyes he'd seen before. Someone he'd long since forgotten.

"Come, this way." The woman led him through the streets to a different part of town, away from the modern buildings. Together with the city's rapid growth to become an economic sector, there were those who could not find jobs and had no place to go. This was their home, a dark layer of the city where the artificial neon lights couldn't reach.

She led him into a rotting building. The floor had been sectioned off with sheets that served as walls - she brought him to one such partition, which was apparently her workspace. In the dim lighting and cheap bed and some off-colored white sheets had been thrown together. The entire floor smelled awful.

"You just gonna stand there all night?" The woman smiled at F.A.N.G, who had not moved an inch since entering the room. Her sweet voice served as a stark contrast to the wretched state of the room. It was the voice of a cunning girl, who knew was her customers wanted. A voice that highlighted her unique charms, her youth. An actress who was intimately acquainted with the situation, and could put on the performance that was necessary.

F.A.N.G stared at her with cold eyes. She returned his gaze, and in her eyes F.A.N.G could see the truth behind her saccharine voice. Behind her youthful, beautiful looks, there was also strength. A strength that was the same as his poison. Her eyes were the same as his were. As theirs were. Then, he remembered the brothers he'd once forgotten.

F.A.N.G had grown up in a certain organization. He was one of many children that this legendary, sorcery-like organization raised, training them to become assassins. Aside from being poor and constantly hungry, the children learned martial arts, how to wield weapons, ancient assassination techniques, and even knowledge on machinery and computer science. They were vigorously trained in order to be assassins in the current day and age. Among the skills they learned, the most important was resistance to poison.

To develop resistance to poison, a strength like poison was necessary - quiet, dark. The strength of a cool-headed, strong resolve. To the organization, this strength was everything. Without this strength, withstanding their harsh training methods would be impossible.

F.A.N.G was one of four children to survive the ordeal. The four of them had been through hell and back, and in the process, developed a bond that was thicker than blood. They had become brothers, chosen by the poison, to become elite members of the organization. F.A.N.G was proud to have stood with his brothers.

"....Hey, mister?" The woman's voice brought F.A.N.G back to reality. She removed her dress while continuing to stare at him. Her pale skin seemed to shine in the poorly-lit room. She slowly approached, one step at a time, while F.A.N.G continued to be motionless. As she closed in, the shadow of a person could be seen moving among the curtain walls.

"Haha, gotcha!" A young man emerged, holding a smartphone which was aimed at F.A.N.G. "Sorry pops, but I got everything I need!"

The man was also young, as if he could be the woman's older brother. He smiled, a smile filled with youthful evil.

"I don't have to tell you this kinda thing is illegal, right?" He waved the phone defiantly at F.A.N.G. "So, I could plaster this all over the web...or maybe just take it straight to the authorities...what do you think, pops?"

Blackmail. It wasn't a bad plan, but the two had made a fatal mistake in their target. Even if the man took his "evidence" to the authorities, it wouldn't matter. F.A.N.G wouldn't show up on any database. To the world, he was a man who did not exist.

"Hah." F.A.N.G let out a small laugh. If he were so inclined, he could kill the both of them before they even had time to scream. His poison didn't just kill, it could erase a person, even their bones, in a matter of seconds. However, he didn't. He had other plans for this cheeky young man.

The mood changed suddenly. As if by sleight of hand, F.A.N.G had removed his hands from his pockets before anyone had noticed, and was holding a large stack of money bills in one hand, and a dagger in the other. He casually threw both down on the floor.