Side readers : 04 「Blue Christmas In Summer」 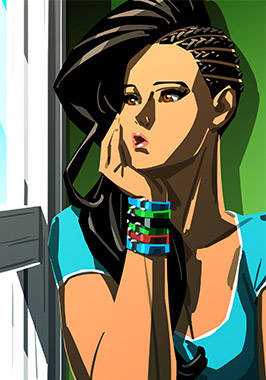 For Brazil, located in the Southern Hemisphere, Christmas comes during the summer.
Though Laura is always bright and cheerful regardless of the season, for some reason something seems to have dampened her spirits...

The main street is adorned with dazzling lights and glitter, with various decorations hanging in the shop windows. Out on the lake there's a large Christmas tree, accompanied by night-time fireworks. On the beach, young people in swimsuits build festive sandmen. Song and dance fill the air. And even Santa Claus can be seen sauntering about, occasionally wiping the sweat from his brow. Even under the summer sun, the spirit of Christmas is all around.

Everywhere, except for one room on the second floor of the Matsuda family house. Laura sits in a chair by the window, gazing out at nothing in particular. Though Laura is usually more festive than anyone else regardless of the season, she now sits in contrast to the happy, smiling faces on the street. As the sunlight pours in through the window she sulks in her chair. She sighs deeply, her seventh sigh of the day, as a gloomy shadow crosses her face. Laura brushes aside her thick, black hair, and lets out another deep sigh - her eighth.

Laura's unusual gloominess has not gone unnoticed - two men gaze at her from outside her door.

"What's got her so down in the dumps? She's been like this all day." Laura's older brother, Fabio Matsuda observes.

Laura's father, Yuichiro Matsuda, looks at his daughter with concern. "She's always so lively, especially during this season. Did something happen?"

Fabio shakes his head. "Not that I know of. You'd know better than I would, pops."

Yuichiro takes a moment to search his memory, folding his arms. "The only thing I can think of that would make Laura so down during this time was the Santa Incident."

Fabio shrugs. "Oh right, that... You really let your guard down on that one, pops."

Yuichiro's face twists uncomfortably as he remembers the Santa Incident - when Laura was 10 years old, Yuichiro dressed up as Santa and tried to sneak into the house to deliver presents. However, he ran into a half-sleeping Laura, who, confusing him for an intruder, threw him clear across the room.

"Poor girl. She probably just wanted to give Santa a hug to show her gratitude."

"Yeah. I thought she was asleep, but I guess I didn't wait long enough."

Young Laura, even while sleeping, was still a formidable opponent.

Yuichiro smiles slightly. "Next I thought she was going to put me in a headlock. It took everything I had to get out of there."

"If she had caught you, the Santa jig would've been up."

Due to the commotion, Yuichiro was unable to deliver the presents. This depressed Laura for a while, as she believed she'd mistakenly driven Santa away.

"But, that was quite a while back. She can't still be bummed out over that, right...?" Fabio says. Yuichiro grunts while stroking his mustache. Fabio leans in and lowers his voice - "say, you don't think she's bummed out over...some guy, do you?"

"Hmm...you mean romance troubles?" Laura had grown up to become a very beautiful woman. She had no shortage of suitors.

"I mean, even if she meets someone, it never works out. You scare them away..."

Yuichiro shakes his head in response. "No, no. That incident back in junior high, that wasn't me. I don't know who called him to the dojo, but it was Laura who gave that poor boy the beating of his life."

Laura has always hated men who were weaker than her.

"Speaking of incidents though," Yuichiro continues, "wasn't it you back in high school...?"

Fabio cuts him off. "No... I heard that some upperclassmen were trying to hit on her, and I mean, I did go check it out, but by the time I got there..."

Fabio recalls the scene - Laura stands amidst a pile of defeated high school boys, not even having broken a sweat.

And this is how it always went. Men who were too flighty with her were sent away with a few bruises for their lackluster efforts. The rest were too intimidated by her to even try. As a result, Laura's love life has never particularly been very fruitful.

"Hmm." Yuichiro pauses for a moment, as he wonders what his daughter is thinking about. "What kind of guy could have this much of an effect on her?"

Laura continues to sit quietly by the window. Through her long eyelashes, her gaze remains fixed on the street outside. The sun shifts slightly, casting its light over Laura's sharp facial features. For a moment it seems as though time had stopped, as Laura's lips part slightly in preparation for yet another heavy sigh. Before she can release her ninth of the day, her eyes light up as they catch something on the street.

Together with her involuntary reaction, a smile starts to spread across her face.

She leaps out of her chair and blows out of the room like a whirlwind. Yuichiro and Fabio find themselves clinging to the door to avoid the destructive force.

"...'He's here?' Pops, let's go check it out!" Fabio blurts out. Yuichiro's face begins to contort into an awkward smile. He agrees and follows his son to the house's entranceway.

As they arrive, they see the gentleman that Laura had waited for. Upon seeing him, Yuichiro now lets out a sigh of his own.

The man who Laura was now having a friendly conversation with was...certainly unforgettable, from his bright green skin, to his thick, beast-like hair. Yuichiro's brows furrow as he focuses on the two of them. The man laughs in response to something Laura said, baring his fang-like teeth. His laugh - "owoo, owoo!" was also feral in nature. He extends a present towards Laura with his hands, which had long nails, sharp like claws. Laura squeals with joy upon taking it, her bright-as-the-sun disposition quickly returning.

"...I see." Yuichiro mutters softly. While Laura's taste in men was certainly curious, as a father Yuichiro only wished for his daughter's happiness. He hated seeing her so gloom, especially on Christmas. The happy, smiling Laura who seemed like she could break out into a festive dance at any time - that just felt right. Now, this is a proper Christmas.

As Yuichiro became lost in his own thought, Laura had turned around to find them standing in the entranceway. She thrust the present forward with both hands, joyfully showing it off. "Hey pops, check this out!"

Within the box in the paper wrapping was an assortment of stuffed plushies in the shape of an elderly man wearing judo clothes. Yuichiro picked one up to take a closer look at it. 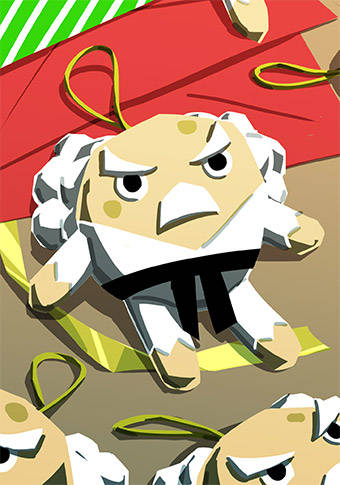 "Yep!" Laura beams. "It's Kinjiro-chan!" It was a plushie version of Kinjiro Matsuda, the founder of the Matsuda style of judo, and Laura's grandfather. Laura moves in closer, beaming with excitement. "This is gonna be the mascot of the Matsuda style. The Matsuda-chan. I used avô as the model."

Seeing the "what in the world is this?!" look on Fabio's face, Laura explains - the man who delivered the box is named Jimmy. Jimmy had some plushies named "Blanka-chan" made from his own likeness, as a mascot of sorts. The plushies were of a strange design, but eventually they became pretty popular in Japan. In a stroke of inspiration, Laura decided to make a mascot for the Matsuda style as well.

"The order was delayed, and I was worried the delivery wouldn't make it in time for Christmas," Laura explains. This had been the cause for her gloomy expression earlier.

"So then, what about that Jimmy fellow?" Yuichiro asks nervously, finding things developing quite differently than he had expected.

"Jimmy? Oh, I asked the same company who made his mascot to make ours as well."

Laura is puzzled by her father's line of questions. "Uh, that's it. I came up with the Matsuda-chan design on my own." As if to boast, she proudly holds up one of the plushies. "So let's give out these Matsuda-chans for Christmas! It's a great way to promote the style!"

Before he can object, Laura quickly recruits Fabio into her plushie distribution plan. Soon after, their younger brother Sean comes home, and upon seeing the Matsuda-chan plushie bursts into uproarious laughter. From the kitchen, the matriarch Brenda calls out that dinner is ready.

In December in a sunny country, the people who are already bright and cheerful elevate their mirth to another level. For Yuichiro Matsuda, today is a day filled with sighs of relief. If nothing else, Christmas in the Matsuda house is business as usual.