Hey everyone, this is Takayuki Nakayama. Today's interview is with Toyohisa Tanabe, who was the director for the sadly canceled "Capcom Fighting All Stars."

I worked together with Mr. Tanabe for 5 years at a different company. He's a great mentor, very easy to talk to. At the time as well, we always just talked about fighting games.

How Things Got Started

Mr. Tanabe, it's been awhile. About four years I believe.

It has been awhile.

Do you mind if I jump right into the questions?

Can I ask you about how Fighting All Stars got started?

Well, at the time, the company I was working at fell apart for a number of reasons. Lol

The dev staff was looking for a place they could go to.

The team that made the game at the time, right?

Yes. Yoshiki Okamoto was kind enough to pick us up.

He said he had just been looking for a team. He was starting up 2 projects.

I see. What was the other project?

It was an action game. The other project was Fighting All Stars, which I got to lead, since I had a lot of experience with fighting games. There were a lot of team members who said they wanted to do it.

Right before Fighting All Stars got started, there was another fighting game that got stopped during development...

I've seen several designs and models from it.

Right. So, there was the discussion to reuse assets rather than making something from scratch.

So, it was us trying to make use of that.

I see! It all ties together... lol

We had concepts like - let's make the characters stylish! Let's have a deep story!

Ryu was going to be in the game, and he already had model data, but we talked about changing up his design.

That's something I wanted to see. What ultimately made it into the game was his usual karate gi design*1.

For D.D.'s 2P costume, he was wearing a jumpsuit that made him look like a motorcycle mechanic. I guess now, we call these alternate costumes? 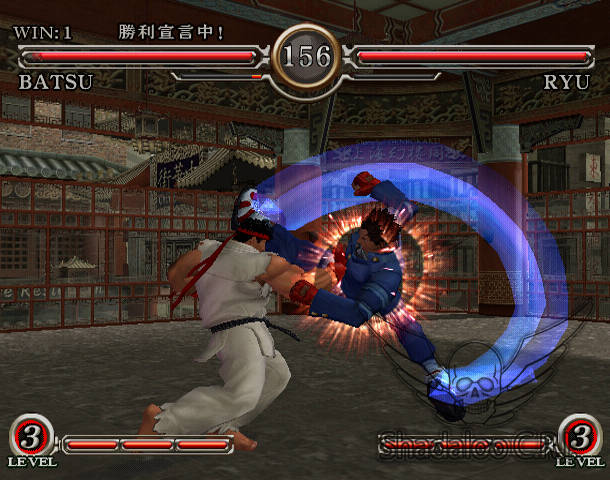 Right. You'd have Ryu in his All Stars flavor, then Ryu in his own stylish clothes. We had a few rough designs and were going to start finalizing things.

But then there were a lot of people who felt like we'd taken things too far, so we gave up on it.

Aw. I wanted to see that.

The main character is D.D., not Ryu, right?

Right. There were three main characters, the "Code Holders". They are the ones who got the other fighters involved.

I'd like to ask you about the game system. It was quite the process of trial and error*2, wasn't it. With things like the sidestep and the "Dramatic Counter".

Dramatic Counter! That's what it was called. Lol

We wanted to make a game that was dramatic.

It was a dodge + counter attack, right?

Right. Upon successfully hitting it the entire game would slow down.

But then, one of the higher-ups called me into his office and said - "Do you think this design as-is would get us 4 weeks' worth of special feature coverage in Famitsu?"

All I could say was "I'll work harder." lol

That was harsh. lol What was the "Declaration of Victory*3" all about?

*3: Check it out - press start at the Vs screen before the match to rile your opponent up! 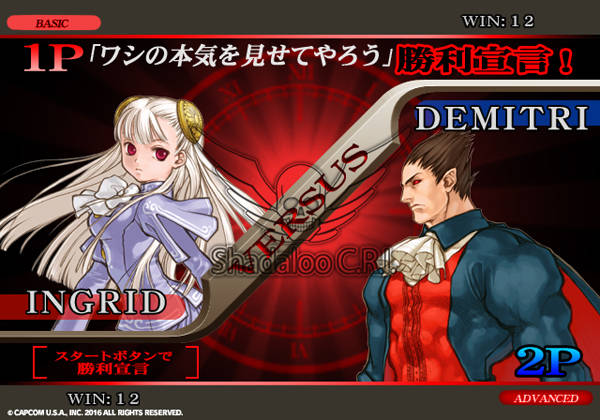 Oh yeah, the "Declaration of Victory."

At the beginning of our plan, we talked about something to taunt the opponent before a fight. From there we came up with the "Declaration of Victory" term, and it sounded nice so we decided to run with it.

If a player did the "Declaration of Victory" it would be added to their score, and they'd get a special win pose.

That's extreme. Were there any demerits to doing the "Declaration of Victory"? In the version I saw, you'd lose the match if your opponent took even just one round.

Yes. Thinking about it now, that was pretty bold. The players were paying money to play the game*4, and they'd lose after losing just one round. lol

*4: Fighting All Stars was going to be an arcade game.

One more - there was a time limit, right?

Yep. That ties into the story of Fighting All Stars.

The last boss was to be the Code Holder "Death." His lifespan was very short.

Death was Ingrid's...something or the other, and there was a time limit on how long he could be together with her, who had a long lifespan. In an act of desperation, he rigged a bomb*5.

So, related to that, the game had a time limit*6. There were going to be multiple endings.

*5: A small-scale atomic bomb. You can see this in the opening. 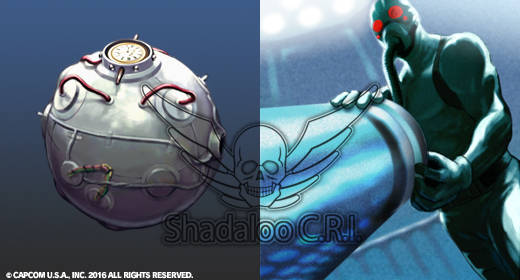 *6: Stop Death and the bomb within the time limit! 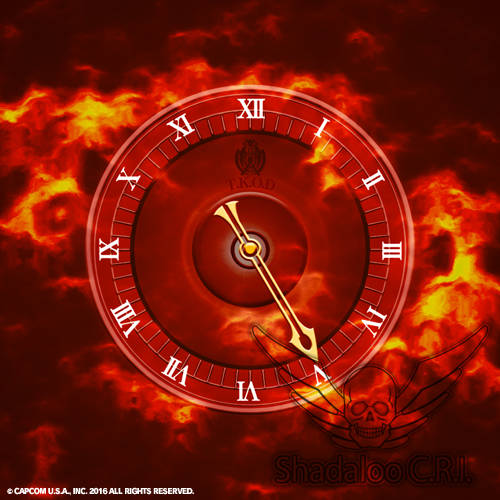 Very interesting. The game would have progressed while telling the story of the Code Holders.

Do you mind if I ask you about Ingrid? Right now, she's got 3 different background stories...

They're all slightly different - in one she's from the future.

*8: Street Fighter Alpha 3 MAX was released in 2006 as a PSP-exclusive title. Ingrid was added to this version of the game.

That's fine for what it is. The people who use her can utilize her however they like. If we try to put restrictions on her then we can't make good things, and that's pointless.

I guess it's because in Fighting All Stars, I wanted to make her an 80-year old "Lolita granny". lol

I see. That's actually younger than I thought. lol

How far did you get in your development of Death? Was he implemented in game? I never saw him.

He was implemented in game.

I was the one who decided his character background. Half of his face would be disfigured, and his body would be in shambles. He'd use moves that would emit dark matter.

I thought we could rely on the effects. lol

He's wearing a long coat*9, right? Making it look cool with the technology available at the time was quite the challenge.

*9: Check out Death. Swaying articles of clothing are difficult to make, then and now. 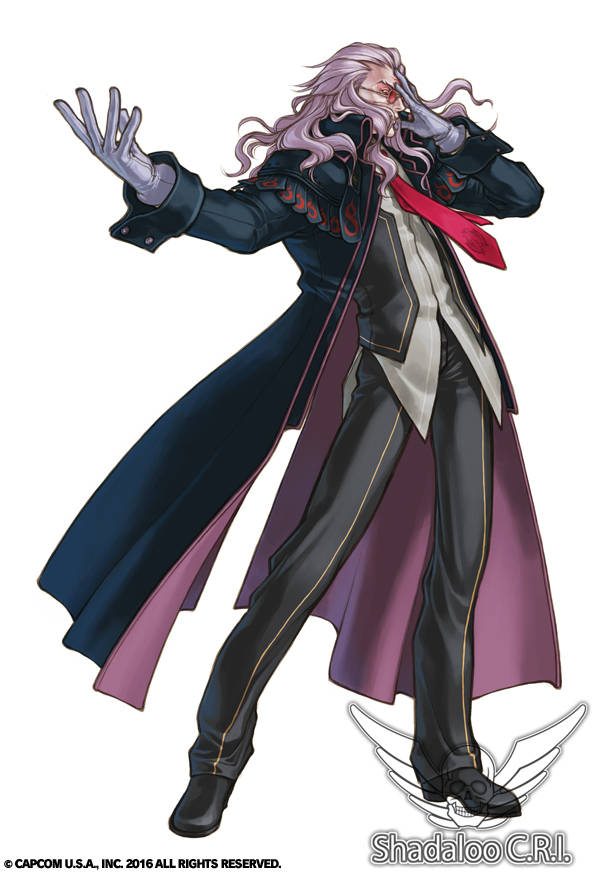 Is there anything else you remember about the game world?

lifeforms, which is not something that can be inherited through parentage. Ingrid and Death are natural Code Holders, who were born with their abilities.

D.D. and Rook were modified to become Code Holders.

Ingrid possessed cells that give her longevity, and didn't become weak. Death had a short lifespan, but in return he could use parts of his body to become dark matter.

D.D.'s nickname was "Crimson Thunder", and he could attack using red-colored lightning bolts. He had the "+" and "-" marks on his gloves, one for each.

Luke could move at fast speeds. As for his name, we thought he was cool...in Japanese, cool is "ku-ru", so we just read it backwards to become "ru-ku", or "Luke". lol

This was over 10 years ago, so some parts of my memory may be fuzzy, but I'm pretty sure that's the gist of it.

And what was up with that secret character*10?

We can't say their name, so we'll use asterisks. Was everything okay contractually? 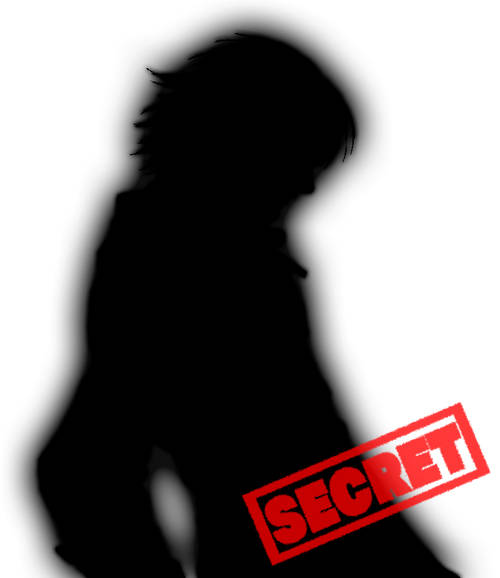 Ah, ***?
Of course, we talked with the other party and had a contract. It's a character from my old place. Someone that is very well known. lol
At the time, we had someone on staff who did their original pixel art.

But even now, it remains a secret. lol

Why Wasn't It Released?

To be honest, from the start I hated the name of "Capcom Fighting All Stars."

Having "Capcom" in the title was fine, it was the "Fighting All Stars" part I hated. I said, "at least let's call it Fighting Saga", but the response to that was "All Stars is what will sell!" lol

That's something I've often heard before. It's terrible. lol

Really, cut us some slack!

This kind of thing leads to a difference in what the players impressions and expectations are, and what we wanted to make and our feelings in making it. That's just how heavy the meaning of "All Stars" is.

The development period was about one and a half years, right?

Right. It was about that long. We showed it at the Tokyo Game Show and AOU, and we also had internal testing, but it was very poorly received.

Then we thought to re-do it, and we increased our staff members for that purpose, but then it ended up getting canceled for several reasons.

...I've talked quite a bit about this game. Why did you want to talk about it?

Well...I wanted to give it a proper last rites and burial. lol

I felt that "Fighting All Stars" ended the way it did due to my inexperience. It caused problems to the company, and I'm sorry to the staff who worked hard on it, and everyone who helped us.

Even 10 years later, it's still a bit difficult to talk about. lol

However, I felt like I'd been saved a little bit when Ingrid appeared in Fighting Evolution.

There are Fighting All Stars fans throughout the world...in some way or another. They - myself included - are glad to have been able to ask you these questions.

No no, the pleasure was all mine. Let's chat again!


So, what do you think? My talk with the director of Fighting All Stars.

Mr. Tanabe is a very kind person, with a deep love for games. Thank you very much for your time.
And thank you all for reading.