This young German man has terrifying blue eyes! He used to be a talented member of Guile's unit. His real name is apparently Holger. 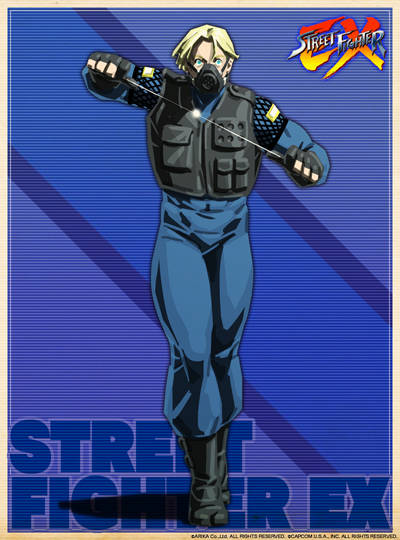 With his keen senses and bravery, he was assigned to a special forces unit. His superior officers had high hopes for the future for him, however his entire unit was wiped out in a night-time sneak attack by Rolento - Dark was the only survivor. Harboring a deep resentment for Rolento, and Guile, who was his superior officer, he has now become a killing machine bent on revenge. He believes in victory and will obtain it by any means necessary.

And now for an additional comment from a superior officer!

Our concept for him was a character who was constantly breaking the rules, someone who'd do any and everything in order to win. Those eyes are really unsettling, aren't they? I feel this is a good character, so I'd love to make a spin-off game featuring him someday!