Expert Course: The School of Turbo

Expert Course: The School of Turbo


Hello everyone, it's the skill smith and your SF Seminar lecturer, Mr. Bug here.
Welcome to the first expert course. This time, I'd like to cover "The School of Turbo."

If you're wondering about the timing, it's because I had the chance to think about turbo lately, and there was someone nearby who could give me the correct answers. So I decided to get it out of my system while the info is still fresh in my mind.

Well then, let's get started.

In past Capcom games, you could choose a quicker game speed. This is referred to as "turbo." 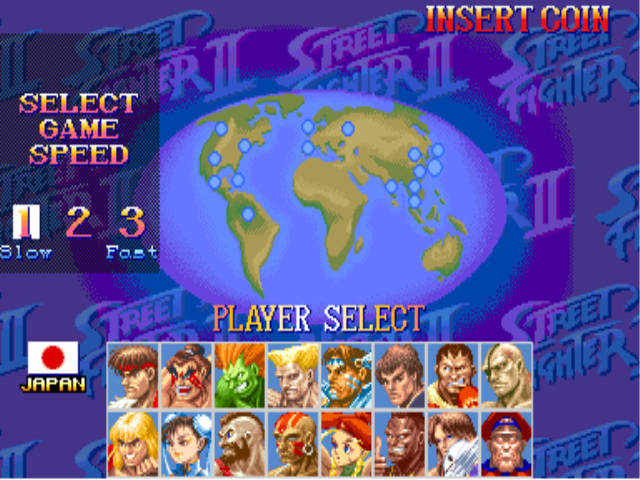 For arcade games, the Street Fighter II series, SF Alpha series, and the Darkstalkers series all featured the turbo option. It basically just increased the tempo of the game.

Someone said this to me in the past -

"Sometimes, with the turbo setting on, important frames get skipped and my combo doesn't connect."

Since the game is made to run at 60 frames per second, and then sped up for the turbo setting, I imagine he thought some frames were skipped in order to make the game look faster.

However, I've had my doubts about this theory for a while now. No matter how tight the frame timing is for the combo, I've never seen a combo that couldn't be hit under the turbo settings. If running at 1.5x speed, frames will run at 1/3 per second. There aren't any combos that are that long and require that degree of finesse - so in other words, the frames aren't skipped. That was my line of thinking. And if there were combos that wouldn't connect due to frames being skipped, then in terms of consistency, there should be combos that would connect. I've never seen or heard of anything like that.

I had the chance to talk with Mr. M, who served as a programmer for Hyper SFII, SF Alpha Fighters Generation, and the Darkstalkers Collection, and was able to get answers to my questions, as well as the finer details.

Ultimately, no frames are skipped under turbo settings.

Well then, let's take a broad look at what's happening with the internal processing.

This is getting right to the heart of the matter, but it's not a requirement that the internal processing runs at 60 frames per second.
In terms of processing, a frame is just the smallest unit. The hardware can run the frames at any speed, depending on the processor's output. However, for the monitor display, they have their own standard regulations, so regardless of whether you're on normal speed or turbo speed, it will display at 60 fps.

So if we were to combine these two elements and sum it up... let's say for example you're running the game at 1.5 speed turbo. The internal processing is handing things at 90 fps, but the images being displayed on the monitor are being handled at 60 fps. This is why everything putting everything on the screen that's being handled at 90 fps looks like things are being skipped.

Maybe it's easier to think of it as watching a video tape being fast-forwarded. When you fast-forward a video tape, the speed of the reel will be increased, leading to a shortening of the time for which each frame is displayed. Even if the monitor it's being displayed on can't quite handle it, all of the frames of the tape reel still exist, and are being processed.

Even if you change the real-time of the internal processing frames, the processing itself is unaffected. This concept might be a bit difficult to grasp for some, so I'd like to go a bit more in-depth with the explanation.

Internal processing refers to each type of boxes, motion progression, movement calculation, etc. - all these things lumped together.
The processing result will always be the same, regardless of the frames real-time settings.

This might be difficult to understand without seeing it in action, but if you move the character, and you advance the game 1 frame at a time by repeatedly pressing the pause button, the same result happens if you play the game normally. It's the same concept.

Going back to idea at the beginning, that "frames are skipped in turbo and the combo won't connect," another way of expressing this idea is "the startup-frames are sped-up under turbo." I feel like this is the main point more than combos, but at any rate, if you've been following me thus far, then you know that...

No matter what kind of turbo has been applied, the startup, active frame, recovery, and advantage/disadvantage frame values will always be the same.

"But, aren't there cases where the processing will be skipped over if the internal processing is sped up...?"
Is what some of you may be thinking. But don't fear - once the processing has started, the idea of skipping something is extremely difficult.

Rather than skipping...the correct word we're looking for here is "dropped."


The Effect of Decreasing the Real-Time Internal Processing

While turbo has no effect on the game's internal processing, the reduction of real-time for the processing frames has an effect on the player's necessary input accuracy, and requires them to have faster reaction speeds.

Simply put, the time you have to visually confirm your links and combos decreases.

In other words, you have an input buffer of 0.017 under normal speed at which your timing might be off - too fast or too slow - but the input will still be accepted. It's best to think though that trying to confirm this visually would be difficult.

Of course, trying to show frame data in real-time increments doesn't really work out, and we wouldn't be able to sync the real-time with the frame data of external interfaces. For example, if an attack with 20F startup is expressed in real-time, that's about 0.33 seconds. Under 1.5x turbo speed, it would become about 0.22 seconds, and would correspond to about 13F under normal speed. On a monitor with a 3F display delay, it would feel like a delay of 4.5F.

As programmer Mr. M told me, there are 2 patterns for the division of frame internal processing. The type used will vary depending on the game.

Pattern A was used in the SFII games, and equally divides up the processed frames to match the turbo speed settings. 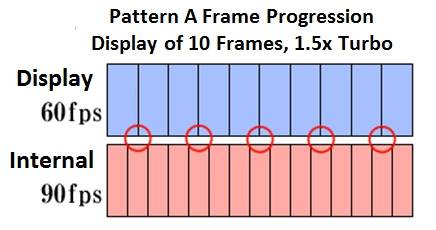 Pattern B was used in games other than SFII, and proceeds at 60fps, same as the display. To match the turbo speed setting, one of the displayed frames is divided into 2 internally.

That's probably a bit difficult to understand, so I'll explain.

Did you enjoy this first expert lecture on turbo?
Turbo settings were mostly featured in past games, but it's something with a lot of depth that's still being enjoyed to this day. If any of the new school players have developed an interest in it after reading this, I'd love for you to give it a try for yourself.