This time we're going to take a look at one of the fundamental parts of fighting games - combos. In this lecture, let's go over the basic knowledge.


Basics on Combos and Links

The number of attacks you can successively connect is counted in "hits." So connecting two attacks together is a "2-hit" combo. 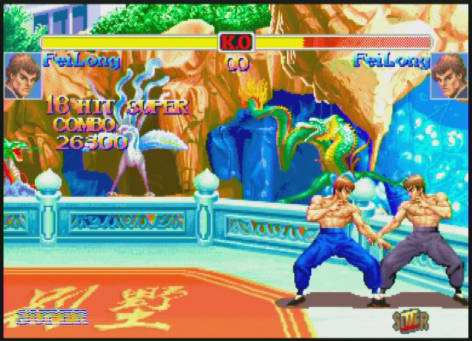 Skillful links can lead to big combos like these.

It's common to say "these moves combo" or "can be linked from", "can be comboed from/into...", etc. The next move in a combo is often referred to as a "link."

With one attack that hits multiple times, each hit of the attack has its own hitbox, and since the time between attacks is small, the other hits in the attack will connect automatically. This is where the name "Super Combo" comes from.

The Super Combo Shinku Hadoken is a single Hadoken that hits 5 times.

For long combos composed of 3 or more hits, we can break it up into smaller combos. Let's call these "combo parts." You can create long combos by skillfully combining combo parts.

There are 2 different types of combo parts, based on the opponent's state.

When connecting a combo against a grounded opponent, this is called a "grounded combo," while a combo that connects against an airborne opponent is called a "mid-air" combo.

Jumping MP hits 3 times against an airborne opponent. The previous example was a grounded combo, while this is a mid-air combo.

It's important to note that even if the combo parts use the same moves, what connects for a grounded combo won't connect for a mid-air combo, and vice-versa. As you come to understand how combos are constructed, you'll be able to tell what will and won't work even if the state isn't listed. However, keep in mind that there are combos that look like they shouldn't connect on paper, but will. That's also quite nice, isn't it?

The condition for landing a grounded combo is "the next attack hits while the opponent is still in their reeling status." Given that, the following conditions are also essential.

Generally speaking, if the startup frames of the linked move are within the advantage frames of the opening move, that will result in a combo. So points 1 and 3 are pretty important. However, point 2 is just as important. Simply put, if the opening move pushes the opponent too far away, it doesn't matter how many advantage frames you have if the next move won't reach. You won't be able to combo.

Crouch MP starts up quickly, and has plenty of advantage frames, making it seem like a good combo starter. However there's a lot of pushback, so it can't be linked afterwards.

This also applies to number 4, as the move can have a fast start up, but if it doesn't have reach it won't combo. There are a lot of moves like that.

For grounded combos, we can create the combo parts while taking into consideration the above 4 points. If we take a closer look at a 3-hit combo...

Connect parts A and B to form the 3-hit combo. Even with the pushback from A, B will connect. From here you can start to think about variations in the composition, such as - can I connect another crouch MP from the first crouch MP? Perhaps it doesn't have enough reach. Is there another combo part that would?

We're really just covering the basics here. When getting in-depth there are plenty of other additional elements, such as ways to cover the pushback distance between 2 and 3. But I'd like to cover that in a separate, more detailed entry.

There really are no basic elements when it comes to mid-air combos. The reason being that the mid-air combo system is completely different for each game.

Just to give you a basic idea of the mid-air combo systems that have been used in the SF series so far...

Since the different games in the series use different, difficult to understand systems (SF3 in particular), here we can only really broadly approach the topic. To some extent, one aspect they all share is - the opening move and the follow-up are pre-determined, and the number of follow-up hits is limited. 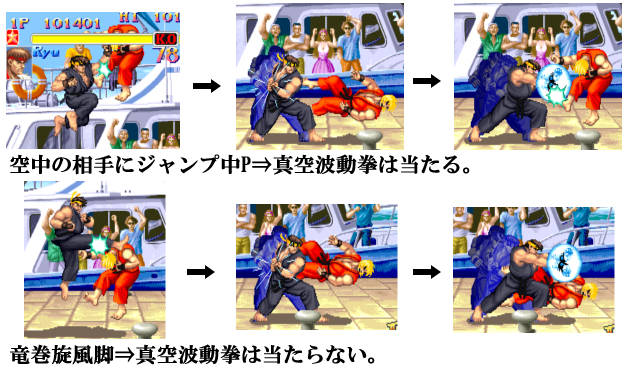 Compared to grounded combos, where things that look like they should connect generally do and is easy to understand, with mid-air combos even if it looks like it should connect it may not, making it difficult to understand. You will just have to understand how that game's system work and try things out for yourself. While it's easy and quick to use the information that others have already gained through their trial and error efforts, I'd like for you to give it a spin yourselves to gain some understanding of how it feels. There may be some combos still hidden in certain games...


Combo Master
Refers to people who love to study combos. Such as yours truly. Rather than practical combos that can be used in a match, combo masters like unconventional combos that you don't often see. It's like we've sold our souls to the devil just to make certain moves connect.

Max Hit Combo
Refers to the maximum number of hits you can get in a combo, both for the game itself and for the character. Keeping the hit counter going is crucial, but some people don't think it counts if you utilize states where the opponent can't recover, such as dizzies. That's pretty strict. For combo masters, we can get pretty involved in trying to come up with the max hit combo, but it can be discouraging if we can't accomplish it using a normal combo.

Stun Combo
This is a combo that takes the opponent from 0 stun to a dizzied state.

Touch of Death Combo
This is a fearsome combo that is able to KO the opponent from full vitality. Also sometimes called a "kill combo," or "100% combo." Unlike the max hit combo, the goal is to completely drain the opponent's life bar, so everything is game - included the stunned state. Many touch of death combos do include a stun combo as part of the overall combo. It wasn't unusual to see this kind of combo in the past (original SFII), but games lately have a lot of various tools and systems in place to prevent these from happening, so we don't see them nearly as much.

Loop Combo
This is a combo where the same move or combo part is performed over and over in a loop. It's quite common to hear "perform ___ iterations of the loop" or something to that effect. If the loop can be performed endlessly then it falls into the next category, infinite combo, but there are some people who still call them loop combos.

As we went into detail for each topic discussed, there isn't really anything to review. Just keep in mind that the conditions for what combos changes depending on whether it's a grounded combo, or a mid-air combo.

And that leads us into the next entry, "The Basics of Combos: Basic Techniques."