Hour 12: The Basics of Attacking: Basic Knowledge about Advantage/Disadvantage

Hour 12: The Basics of Attacking: Basic Knowledge about Advantage/Disadvantage

Last time we talked about recovery, specifically the concepts of advantage and disadvantage. So in today's lecture I'd like to go more in-depth about that topic.

In the last lecture, we looked at how, upon hit, an attack transitions from the remaining active frames, into the recovery frames. Now let's take a closer look at why that is.

An attack will lose its hitbox upon hit or block.
This has nothing to do with how long the active frames are. They could be 1, or 100 - upon hit, the hitbox is lost. For moves with multiple hits, this isn't an extension of the active frames, but rather each attack having its own hitbox, overlapping with one another.

It's easier to think about in terms of the hitbox being added to an empty attacking motion. 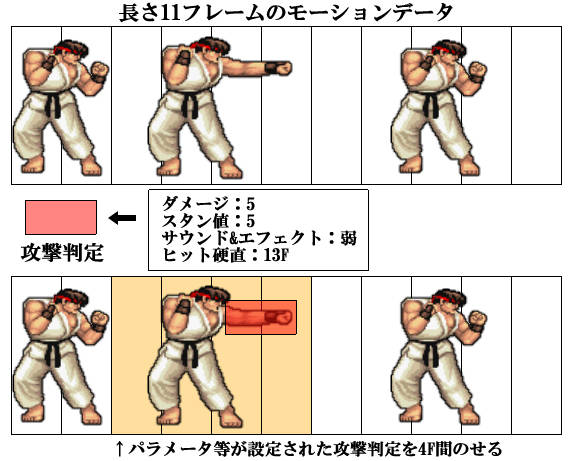 Another way to say this is - after the attack hits, the remaining active frames will be the same as the recovery. In Hour 9 we talked about how longer active frames doesn't necessary make for a strong attack. This is one of the reasons why.

If you as the attacker are at a disadvantage after an attack, the larger the disadvantage, the greater the startup of a counter-attack from the opponent can be, that will be able to hit you while in recovery. A counter-attack that can hit the attacker while they are still in recovery is called a "punish." This also gets quite detailed, so let's talk about that a little later.

Ryu's uppercut is at a disadvantage even on hit. Certain attacks will be able to punish it.

If the attacker is at an advantage, it means that you can do whatever you want in that time, such as walk or dash to size-up your opponent, or use an attack with large start-up that won't be easy to interrupt. Let's take a closer look at what specifically happens after hit, and upon block.


Effects from Advantage on Hit: Concept of Combos

Combo. Has a nice ring to it, doesn't it?
In our example, LP on hit gives 4 frames of advantage.
So crouching HK, which starts up in 4F, can connect during the advantage.


The number of attacks you can successively connect is counted in "hits." So connecting two attacks together is a "2-hit" combo.

We've touched on this topic so far in the seminars, but with one attack that hits multiple times, each hit of the attack has its own hitbox, and since the time between attacks is small, the other hits in the attack will connect automatically.

One attack with multiple hitboxes, that combos automatically.

This time we're only going to cover the concept of combos, but the combo aspect in battle is something that's of utmost importance, so in the future I'd like to have a "Basics of Combo Knowledge" lecture. Combos just happen to be my specialty, and I know many of you are probably expecting something really in-depth, so once I finish with the basics I'm planning on diving right into it. I hope you're already looking forward to it..

So if the opponent blocks an attack, and while they are still in recovery from the first attack, they're hit with another attack, they will be forced to block again while being unable to move. Attacks such as these are called "block strings" while the opponent in this state is in "block stun."

Basically, if the opponent is in block stun during a block string, they can move the joystick in any direction but will still be forced to block. However, it will still be necessary to block high/low accordingly for high/low attacks. However, high and mid attacks can be blocked with the joystick in neutral, and low attacks can be blocked holding the stick straight down.

There are games that allow the opponent to input a different direction, release the block, and take the hit in the middle of block stun/a block string, but generally speaking, you can think of the opponent being stuck in block stun.

Unlike combos there's no hit counter or in-game announcement that shows block stun, so it's something you just have to get a feel for while playing the game.

Punishes are attacks that can connect while the attacker is still in disadvantage. For example, if the attacker is at a -6F disadvantage after the attack, the defender can punish them with a move that starts up in 6F or less. Punish refers not just to the attacks, but to the idea that an attack is not safe as well.

Ex:
"What is the largest punish for this move?"
"Is this move punishable?"

Let's summarize the points we've covered so far in this lecture.

Lately there has been a very large emphasis on frame data, advantage and disadvantage in particular, to the point where it feels like the person who knows most about it controls the match. Information can be thought of as a tool to sharpen your knowledge in the middle of a real-time battle, but no matter how good the info is, it won't be enough to cut down your opponent.
So let's first work on solidifying our fundamentals. The detailed stuff comes after that.