Hour 8: The Basics of States

Hour 8: The Basics of States

Hello everyone, it's the skill smith, Mr. Bug checking in. In Hour 7 we talked about boxes. Now using that knowledge as a base, I'd like to talk today about the various states a character can be in.

In a fighting game, the states that you and your opponent are in are constantly changing - attacking, moving, blocking, getting hit. Understanding what's going on during these states, particularly in the terms of boxes, is essential.

When it comes to attacking, there are countless variations on the boxes depending on the move that was used. For most other states, though there are differences that depend on the character, for the most part the basics are generally the same. For that reason, today I'd like to skip over attacking and look at the fundamentals of the other states.

With the exception of attacking, we can divide the states into 3 major categories.

Regular: Standing, crouching, jumping. Does not include attacking.
Blocking: Upon blocking an attack.
Getting Hit: Upon getting hit with an attack.


There are times when blocking and getting hit fall under the same category, but for ease of understanding, in this lecture we're going to keep them separate.

So now let's take a closer look at each category.

While this isn't limited to the regular state, basically there are relative size differences in your character's hurtbox depending on whether they're standing or crouching. 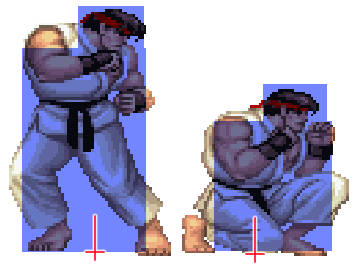 As a result, though you may be standing in the same location, the difference between standing and crouching can determine whether or not an attack hits. 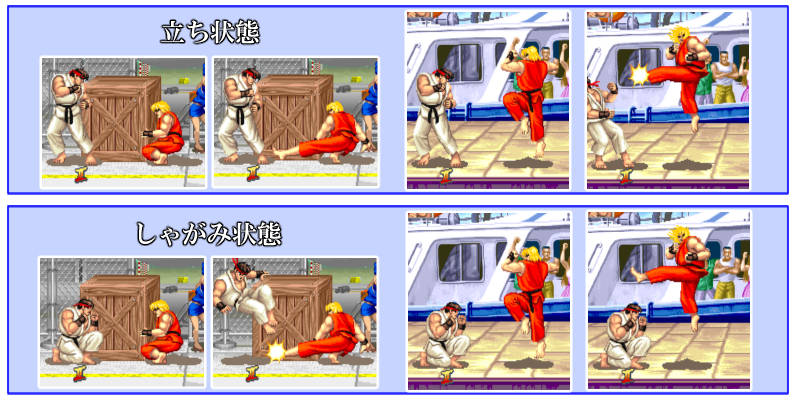 As shown above, even at the same distance, a change in the fundamental state determines whether or not the attack hits or misses.

In previous lectures I've said that crouch blocking is pretty safe. But it's also a state where attacks can reach you more easily. If you understand the nuances involved, you can use the standing state to make your opponent's attacks miss, and to make it harder for them to chase you down.

The basic principles are the same for all characters, however as I said before there are individual differences among the characters and their different statures.

As you can see above, for characters with different statures, at the same distance the same attack will miss one, and hit the other.

Knowing whether an attack will hit against each opponent during a match is extremely important. But before you tackle the whole cast, first start with learning your character.

As for jumping, it's common for your character to have no hurtbox from the waist down during a jump1. This is to make it easy to jump over projectiles2 such as the Hadoken. Generally as you don't have face-offs while jumping as you do on the ground, you don't have to worry about your jump hurtboxes all that much.

1: During a jump, your character is given a special hurtbox that is invincible to projectiles.
2: Things like the Hadoken - objects that are thrown/shot/etc. across the screen - are called "projectiles." They are also often called "fireballs."

Generally, you can only block in the standing or crouching state. Similar to the regular state, the box size is relative to whether your character is standing or crouching. One way to think of it is - your guard boxes are the same size as your regular state and hurtboxes. There may occasionally be differences based on the game and character, but we can worry about those as the need arises.

While blocking, even if your opponent performs a throw it won't connect.

This is getting a bit off-topic, but in previous lectures I've said that blocking doesn't defend against throws. Now we have "you can't be thrown while blocking" and it might feel like these concepts are disconnected. But remember that blocking is something that will happen automatically if you just keep the stick pushed backwards. The major takeaway here is that throws are a move that do not cause block. Subsequently, if you've been made to block, you can't be thrown. There's a whole lot more about the properties of throws and when to use them, but I'll go into more detail with that when we cover attack strategies in a later lecture.

Also note that the state in which you are blocking an attack is called block stun.

If you get hit while on the ground, your character will be knocked backwards while keeping their feet in place. This is called hit stun.

The character bends backwards after taking a hit.

It's the same if you get hit while crouching, and is sometimes referred to crouching hit stun to differentiate. Just like the regular and blocking states, your boxes are bigger vertically when standing, and bigger horizontally when crouching.

The important takeaway here is that during hit stun, just like during block, there are no throw hitboxes. So if you get hit with an attack you can't be thrown immediately after, regardless of whether the attack hits, or is blocked.

If you get hit while in mid-air, your character will recover and land. This is called knockback, or mid-air recovery.

Upon getting hit, the character corrects themselves in mid-air and lands.

As they're not knocked down, they're able to move as soon as they land. The important takeaway here is that from the time they get hit until the time they land, they are completely invincible . 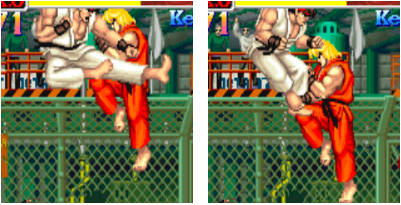 The attack will not register during mid-air recovery.

In general, regular attacks that hit in mid-air will put the character into the knockback state. Though there are times when it's possible to get hit during the mid-air recovery, for the most part, that's an exception to the rule for the SF series. You can think of the mid-air recovery as generally invincible.

If the character is hit by an attack that causes knockback, but instead of recovering and landing the character hits the ground, this is called a knockdown, or sometimes just down.

They're knocked back, and then subsequently down.

Unlike the mid-air recovery state, while they're still in their reeling animation they are not invincible and it's possible to hit them with attacks.

Getting hit with attacks while still in knockdown state.

We'll go more in-depth about this later, so for now let's leave it at that.

The most important thing to learn here is that once your opponent is completely knocked down, from that point until they get up, they are completely invincible.

The attack won't hit while the character is laid out on the ground.

Of course there are some exceptions to this rule as well (in SFV there are moves that hit while the opponent is laying on the ground), and in other games there are moves designed specifically to hit grounded opponents. However as the basics, you can remember that downed opponents are invincible.

Let's review what we've covered in this lecture.

1: Character boxes are larger vertically while standing, and larger horizontally while crouching.
2: Characters cannot be thrown while in hit stun or block stun.
3: Characters are invincible while in mid-air recovery, and when knocked down on the ground.

We'll get into the finer details later, but for now just focus on memorizing those points.

Do you have a better grasp of the fundamentals about states in terms of boxes? We've started to get into deeper game elements here, so first I'd like you to take your new knowledge and fire up a fighting game, then come back and re-read these lectures after having played for a bit. You may find yourself gaining a new level of understanding.

Of course, that all depends on how much you play the game.