Hour 7: The Basics of Boxes

Hour 7: The Basics of Boxes

Hello everyone, it's the skill smith, Mr. Bug checking in. Today we're going to get into the details of game composition, and talk about boxes.

Boxes are a gaming concept and terminology. Boxes are essentially "judgment" that determines whether or not an attack will connect. There are a couple of different types of boxes, and these help to create the inner framework of the game.

First off, boxes are not visible in-game. They're something that's handled internally, so you won't see them on the game screen. You may be thinking that the representation of the character on-screen should be accurate in determining where the boxes are.

Like this. The blue represents the character boxes, while the red indicates the attack range.

Though basically the boxes do try to visually follow the character's image, in reality it isn't quite as clear-cut.

The character's boxes are the blue areas only. 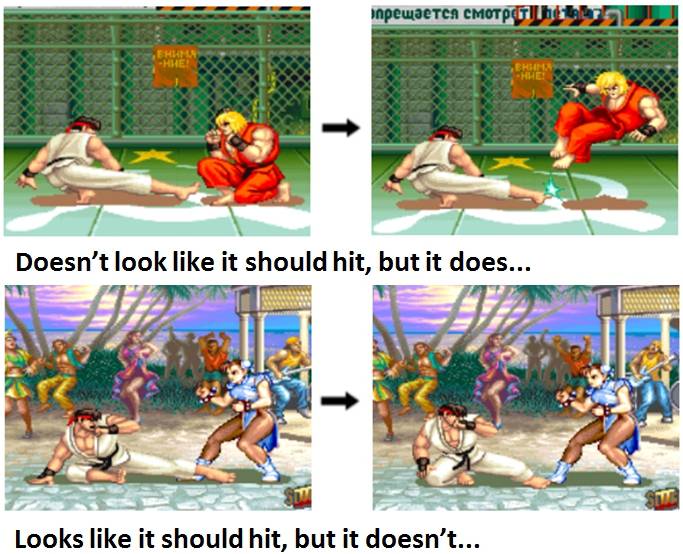 Doesn't look like it should hit, but it does...(Upper)

There are various reasons why the boxes don't quite match up perfectly with the character graphics, but essentially boxes are handled in a way that's easy in terms of game functionality.

These three boxes interact in real time, and make up the backbone of the game's composition. Let's take a closer look at all three. 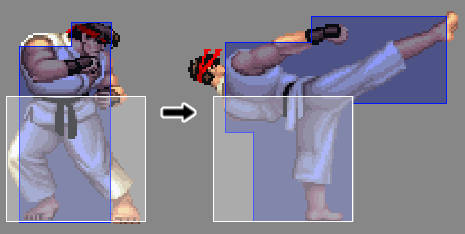 Perhaps the easiest way to show this is with Dhalsim and his stretchy limbs. As his limbs have a hurtbox you can hit them, but since there's no throw hurtbox you can't throw them.

The stretchy limb has a regular hurtbox (blue) so it can be counter-attacked, but as there's no throw hurtbox (white) it can't be thrown.

There are certain states and moves where the character has no hurtbox. An attack will not be countered even if it comes into contact with the character. This is called invincibility. 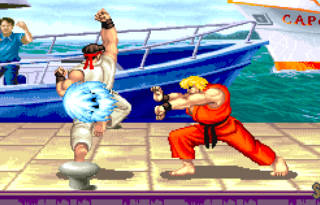 The attack is there, but Ryu is invincible so it doesn't connect.

There are various other aspects to invincibility, but I'd like to save the talk about that for a later lecture.

Hitboxes are boxes that contain an attack. If your attack's hitbox comes into contact with an opponent's hurtbox, the attack will count as having connected. In the above images the hitboxes are shown in red.

As was explained in the hurtbox section, there are two types of hitbox - regular, and throw. The regular hitboxes are linked to the hurtboxes, so an attack will have areas of both hitbox and hurtbox.

This is a special type of box, whose function is to keep two characters from overlapping each other. If your opponent is right next to you and they start walking, they'll push you backwards. This is thanks to the collision boxes for both characters that keeps one from overtaking the other.

Similar to the throw hurtboxes, the collision boxes are centered on the character's body and don't include their arms and legs. 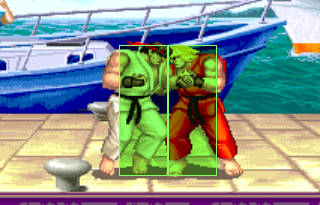 Characters push against each other instead of overlapping.

The boxes are square/rectangular shaped, but that doesn't mean you can jump on top of an opponent. You'll end up pushing them and fall either to their right or left.

There are moves that don't have collision boxes. Without them, one character can pass through another.

With no collision boxes, a character can pass through another character.

If the no-collision box state runs out while the characters are overlapping each other, they'll start pushing off each other. They will not continue to overlap - rather one character will go either right or left.


That wraps things up for the basics on boxes. What did you think of today's lecture?
Boxes aren't something you can see, but by understanding the inner workings of them, it'll raise your overall knowledge while you're playing the game. You can think things like "Ah, the hitbox extends out this far, so I can attack in this manner" or something like that. Expanding your knowledge in this way makes the game much more interesting. I'd be thrilled if more people could find enjoyment in this way through reading these lectures.