Hello everyone, Mr. Bug here. Up next for today's lecture on the basic rules and knowledge - defense!

While there are various defensive systems found in the different games, I'd like to focus on the basics of 2D fighting games - the art of blocking.

The concept and feeling about blocking can be difficult for newcomers to fully grasp. Not knowing when you can and cannot block can be a major hurdle for you in the beginning, so let's sink our teeth into this topic as much as possible.

SThe SF series is a one-on-one fighting game. You and your opponent face each other on-screen, and it's safe to say the majority of game time is spent in this state.
Input the joystick in the direction away from your opponent in order to block. 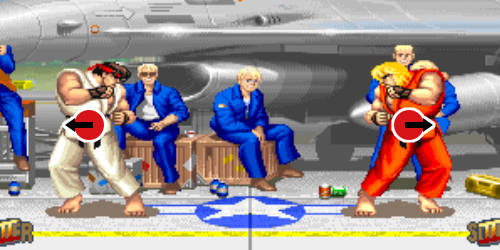 Here, Ryu inputs ←, while Ken inputs →, so both characters will block.

This much is written in the instruction manual. But this isn't enough for those who've never played the game to truly understand what it means to block.

So if we were to break it down, let's say - "Input the joystick in the direction opposite of your opponent, and when you are attacked you will block automatically."


That "automatically" is very important - without it, if you constantly input back on the joystick, then your character would just continually block.

At any rate, there are different types of blocks, and attacks that can't be blocked, so if you think you can just hold backwards and block everything, then you're in for a surprise. Let's start diving into the finer details.

Let's look at the basic effects of blocking.
Last time we talked about the different categories of attacks. Now let's revisit those categories and see what happens when we block an attack from one of them.

As a basic principle, you won't take damage if you block normal or special moves*1.
*1: Street Fighter V uses a somewhat different system where this isn't entirely true, but for now you can think of it as taking no damage as a basic principle.

We briefly touched on this in the previous lecture, but throws cannot be blocked. We'll get into the properties of throws, including how to defend against them and evade them, at a later date.


Basic States where Blocking is Possible

Your character can be in three basic states - standing, crouching, or jumping. There are three different types of normal moves that can be done from those states. However, in the main Street Fighter series*2, you can only block while standing or crouching. You cannot block in mid-air.
*2: Mid-air blocking was possible in the Street Fighter Alpha series. 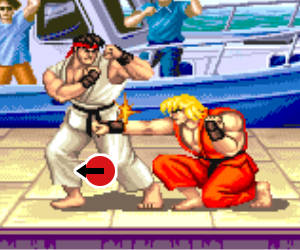 This is a standing block.

The characteristics of a standing block are...

1: You can block "high" and "mid" level attacks.
2: You will walk backwards when your opponent is not attacking.

In regards to 1, we'll get into high/mid blocks when we talk about the crouch block in a bit. For 2, as the inputs for walking backwards and blocking are the same, the important point to take away is that it's not possible for you to just stand there and block continuously. 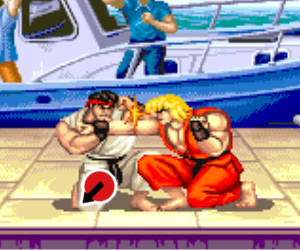 This is a crouch block.

The characteristics for a crouch block are...

1: You can block "mid" and "low" level attacks.
2: Your character will not move from that spot, even if the opponent is not attacking.

I'll go into more detail in the next section, but crouch blocking is pretty strong when you're engaged in a ground-based battle. No matter what your opponent throws at you, you hold your ground. It's fairly easy to use.

Attacks have "blocking attributes" which determine how the attack must be blocked. You will have to choose your blocking method in accordance with the type of attack that's coming your way. 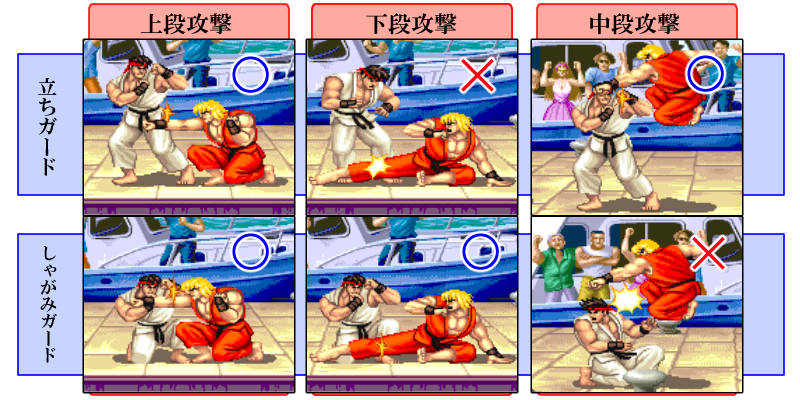 If you look at the blocking attributes, you can see that while on the ground, your opponent can only attack with mid and low attacks. So then, the basics for blocking are -

While your opponent is on the ground, crouch block everything. When they jump, do a standing block.

So when you're both on the ground, when you're not walking around or attacking, basically you should be in a crouch block state.

However! There are moves that are performed on the ground that hit high. These are called overheads, and are usually unique moves. You can start to think about dealing with these when you think about your strategy for that specific game.

Ryu's Collarbone Breaker is a high-hitting grounded attack, and one of the more well-known overheads.

A proximity block refers to you going into the blocking state, even though the opponent's attack will not reach. 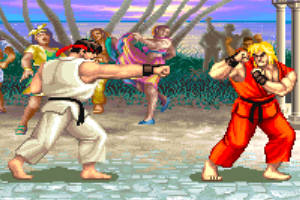 The move is out of range, but Ken is in his block animation.

The blocking animation is triggered at a certain range.


States Where you cannot Block

In addition to jumping, there are other states where you won't be able to perform a block.

-- In the middle of a move
You will not be able to block until the move has finished.
This is what makes missing heavy attacks so dangerous.

Miss an attack as badly as this, and you'll get counter-attacked.

-- While unable to move due to being attacked
If you get hit with an attack, you'll be in a state when you will be unable to move for a certain period of time. You will not be able to block during this time.

Getting hit with an attack like this will cause your character to stagger or be knocked down. You'll be unable to move while in that state.

While you're getting hit with an attack, you won't be able to move. So then...what happens if your opponent hits you with another attack in that state...?

Yep! But, that's for another time. It can be said that this particular aspect of fighting games is my specialty, so I hope you're all looking forward to that lecture. I know I am.


That wraps things up for the basics. We've covered movement, attacking, and defense, which are the core fundamentals. I hope you found it to be informative. Now we're going to start getting into the compositions of fighting games from various different angles.