Hello everyone, Mr. Bug here. For today's lecture on the basic rules and knowledge, I'd like to focus on offense. Rather than talking about strategies, this talk will mainly be about the categories of different attack moves.

In the last lecture I mentioned that the buttons make your character attack. If you just press the button and nothing else, this will result in what is called a normal move.

The top row is punches, the bottom kicks, and the strength of the attack increases from left to right. 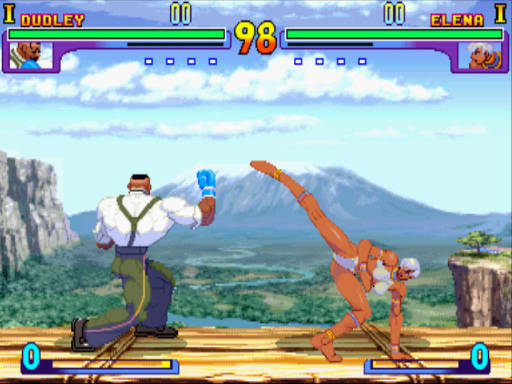 Stronger attacks deal more damage, but as they are bigger movements, they will leave you more vulnerable if you miss.

There can be a pretty big difference between characters when talking about the punches and kicks, and their various strengths, but for now you should just memorize the basics.


Normal Attacks Based on State

In the movement lecture we talked about three states - standing (walking), crouching, and jumping. Each of these states gets their own attack (attacks performed while walking are the same as standing). 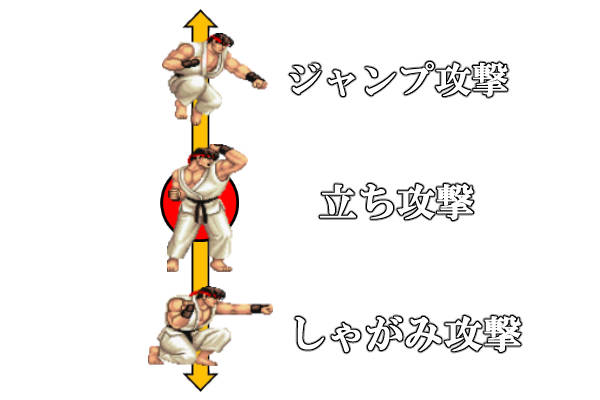 Light punch for each state. Each attack button has three variations to it.

It's common to combine the state and the button when talking about attacks, such as "standing light punch" or "crouching heavy kick." However, writing it all out like that is usually reserved for official sources. When you see fighting game players write it out, they usually use more abbreviations and specialized language. I'll go over that more in the Learning the Lingo section.

Normal moves in the three states above are the basics, but depending on the game and the character there may also be close/long rage moves, as well as neutral/diagonal jump moves. 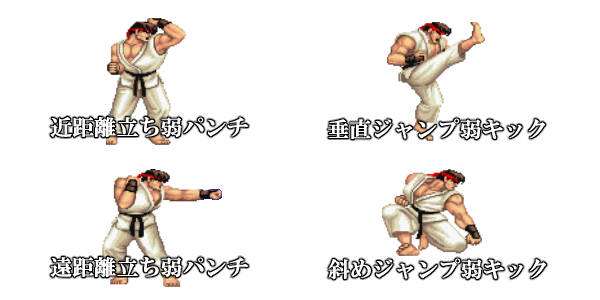 Attacks that change based on distance are standing regular moves*1.
The distance is only measured horizontally - so if you are in close range and your opponent does a neutral jump, even at the top of their jump arc they will still be considered to be close range.
1...: In the original SFII, Dhalsim's crouching normals were also affected by distance, but as there are no other cases like this, this is an exception.

This leads to a lot of different normal moves to try to gain an understanding of, so I recommend narrowing it down to the ones you understand and can use, and practicing with those. Get used to those moves, and then gradually add to your repertoire. You may find some moves that are not useful (or so it's said...), but if you look it up, it may be more useful than you think. Don't just listen to what you hear, but test things out for yourself.

In addition to moves performed by pressing a button in one of the three states, characters can also perform moves with a combination of joystick inputs and buttons, or just by using special button inputs.

These moves, which usually require some joystick inputs, are called special moves.
The inputs used to execute special moves are called commands. In the past we used to refer to them as command moves, but now that meaning has changed a bit, so it's okay to stick with calling them special moves.

This is a move that requires joystick inputs and button presses.

Special moves are superior to normal moves, and there are a lot of highly-detailed components about them that will have to be explained. I'd like to save that for another lecture in the future, so for now let's move on to the next type of attack.

Unique moves require commands, but are limited to one stick direction and one button. For example, forward + heavy punch.

An example of a unique move.

Unique moves exist between normal moves and special moves. Unlike normal moves they can move your character while attacking, making for a very refined move. 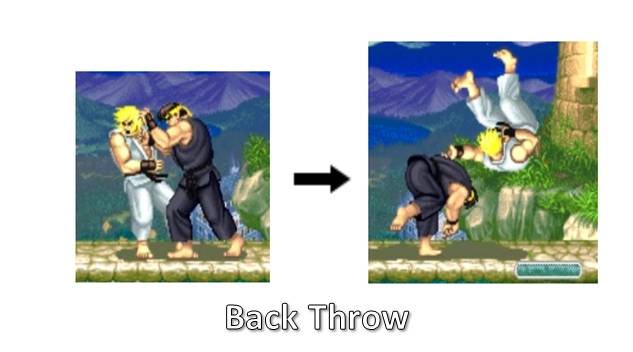 Grab a nearby opponent and throw them.

Though some of these attacks include kicks and punches, they're universally referred to as throws. The command may differ by game*2, but the command will be the same for all characters in that game.
*2... From SFII to SFIII 2nd Impact, the command for throws was backwards or forward + heavy punch when close to the opponent, but from SFIII 3rd Strike onwards it was changed to light punch + light kick when close to the opponent.

There are some special move throws. To distinguish, a throw can be referred to as a normal throw, while the special move throw is a command throw. As there's a lot to cover with throws too, so just like with the special moves, we'll tackle it in a later lecture. For now, all you need to know is that it's a standard, universal move that can defeat your opponent's guard.


Attacks that use Gauge and Game Systems

In addition to the attacks I've talked about so far, there are attacks that use up some kind of gauge. As these vary greatly depending on the game, and are an extension of the normal moves, special moves, unique moves, and throws that we've discussed here, you should gain a good grasp of the general concept of these moves, and then really get into the details once you start playing.

In regards to normal moves, they combine the three different states together with the three strengths of punches and kicks. As such, there are various different naming conventions for them, abbreviations included. Here I'd like to cover a few that I think you'll see often.

"Down" isn't used so much for the state of crouching, as it is in relation to unique and special moves. For example, if a character was crouching they're not "down," but they may be "holding down" in reference to a move, or a sequence of joystick inputs.

I feel like "jump" usually refers to a forward jump, with "neutral" or "backwards" being used to distinguish the other types.
A player who does a lot of backwards jumping may be referred to as "runaway". So if you see something like "runaway medium kick," it means backwards jump medium kick.


Light/medium/heavy is the most common terminology, and is what's used as the official denotation. It applies to both punches and kicks, so you can say "light punch" or "light kick" and either way it refers to the leftmost button.

Similarly, short/forward/roundhouse is used in place of light/medium/heavy for kicks.

■Other■
A crouching heavy kick attack is commonly referred to as a sweep. Though sweep properties differ by game, they usually knock the opponent down and give a significant advantage to the player who landed one. It's more common to hear "sweep" than it is "crouching heavy kick" or even "crouching roundhouse."

■Abbreviations■
If you've ever seen fighting game players talk online, there's a good chance you've seen a lot of abbreviations. I'll try to run down the more common ones here.

If that wasn't daunting enough, abbreviations are often combined in order to express normal and unique moves. In these cases a period "." will be used to separate different abbreviations.

Okay, pop quiz. What is "SC.HP?" If you answered "standing close heavy punch," then give yourself a prize. See if you can also figure out the following.

So how did you do? Here are the answers!


And one more thing! Here I used capital letters for the abbreviations, but you will see people expressing them using lowercase as well. This is cosmetic - there's no difference between C.MK or c.mk. You may even see people mixing the styles, using notations such as c.MK.

That wraps things up for the basics in regards to offense. There are a lot of normal moves spanning across the different Street Fighter titles, so trying to learn them can seem like a colossal task. However if you really dig in deep with them, you'll find your efforts will be rewarded, so I'd like you to really hit the lab and study up.
Next up we'll be looking at the basics of defense. See you again soon!