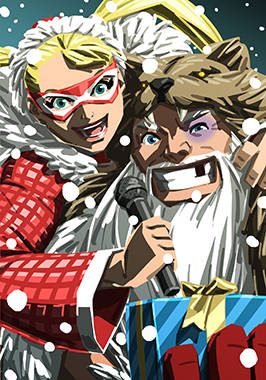 On a snowy night in the Masters family winter home, an intruder sets their sights on Mel's room.
Ken leaps into action, using his refined martial arts skills to protect his family.

Ken quickly climbed up the stairs to the second floor, where the noise had come from.

Whoever it is had managed to slip past security and was trying to break into the Masters family home. This isn't some petty thief.

Ken put his back against the wall and proceeded down the hallway. At a glance there was nothing there. But Ken put his finely-tuned senses to work.

There was someone on the balcony outside of the window. Ken looked and saw the shadow of two people, faintly illuminated against the snow.

Ken realized that the two shadows were heading to the bedroom where Mel was sleeping. His heart pounded heavy in his chest. So they are after Mel! His blood started to boil - I won't let them lay a finger on my son. He leapt toward the window.

Ken crashed through the window with a thunderous sound, landed on the balcony, and used his momentum to spin around and kick the shadowy figure before him. Foot meets flesh and bone with a heavy thud. The shadowy figure is sent flying, landing on top of the snow.

Ken lands and immediately kicks up some snow. He turns to the larger shadowy figure, who has yet to react to what is happening. Ken dashes forward, his clenched fist ablaze with the spirit of the fight.

With a pointed breath, Ken positions himself to deliver a fierce uppercut. He lifts his entire body upwards, like a dragon stabbing at the heavens. His fiery fist connects cleanly with the intruder's jaw.

Ken's trademark special move was a little different this time. It was fueled not only with his usual fighting spirit, but with everything he's got. His fist hit something that felt more like steel than flesh, but it was definitely a clean, direct hit. The intruder reeled from the force of the attack. However...

Ken's finely-tuned battle senses told him that the enemy was still standing. His heart skipped a beat, not from fear, or anger - but from the excitement of facing a strong opponent.

I'll take him down, no matter what!

Ken knew he couldn't stop now. He grabbed the staggered opponent's arm and lowered his posture in preparation for a throw. Just then, a voice:

It's was a voice that Ken had heard before. The voice was accompanied by a shadowy figure who got between Ken and his opponent - the one Ken had taken out before. Ken took a closer look at his opponent's face, and was surprised by what he found - a female wrestler, wearing an eye-mask. Someone Ken has crossed paths with many times before in his life as a fighter.

"That's right! Oh wait, I mean, no I'm not!" Even though she just admitted her real identity, she quickly gestured to her attire. She wore a red tunic decorated with tassels, and shorts. "I'm not Mika! I'm a snow fairy!"

Ken was dumbfounded. The clothes aside, it was most definitely Rainbow Mika. So if this shadowy figure was Mika...

Ken looked at his opponent, who he was still holding onto. The large bearded man with the fierce expression smiled faintly at Ken, still in mid-throw position. It was a face that Ken had seen countless times before, an old friend who he had battled many times in the past.

"Nyet!" Zangief, wearing a bearskin hood around his neck, shook his head. "I am not Zangief. I am the Ded Moroz!"

"Ded Moroz! You know of old man in winter, do you not?"

"Think of him as the Russian Santa Claus," Mika, or rather the snow fairy, said discreetly.

Ken started to gain a clearer picture of what was going on - these two, complete in their festive outfits, wanted to surprise Mel with a present. He breathed a long sigh of relief. With the tension dissolved, Ken's surprise turned to annoyance.

"Seriously, you two. Sneaking in here like that, do you have any idea..." He readjusted his grip on Zangief's arm. "...How close you were to a beating!"

Ken completed his throw, tossing Zangief up high into the snowy sky.

"Whoa! Master Zangief!" Without thinking, Mika jumped off the balcony in pursuit. Ken shook his head incredulously and then also jumped off. He was in no particular hurry, since he knew it would take a lot more than that to hurt the Russian Cyclone.

"It is impressive throw! You have good spirit! We come to bring present to your son. It is muscle training starter set!" Zangief said, smiling while sprawled out in the snow.

"I mean, I do appreciate the thought and all. But couldn't you just have knocked on the door?" Ken furrowed his brow. Zangief and Mika are skilled fighters, but getting past the security couldn't have been easy. "How did you guys get in here?"

Mika answered: "Oh, it's thanks to my sponsor. She let us use her helicopter."

She pointed up at something dazzling in the sky.

Ken looked up, shielding his eyes with his forearm. A stealth helicopter hovered overhead in complete silence. It was painted in bright colors that made it look like a piece of wrapped candy. The hatch opened, and someone waved from inside.

It was Karin Kanzuki, wearing a party dress. She is the young leader of the Kanzuki Zaibatsu, a mega-conglomerate said to surpass even the Masters Foundation. She is also a capable fighter, and a fellow ally in the fight against Shadaloo. Seeing her wave from the stealth helicopter, painted up like a piece of candy, was enough to dissolve any feelings of annoyance that Ken had left.

Geez. What a night.

Ken smiled, faintly at first, and then burst out laughing.

From the first floor, Eliza could see the large, costumed man fall from the balcony, followed by Ken. Now hearing their laughs, and seeing the brightly-colored helicopter in the sky, Eliza figured out what was going on - Ken's friends dropped by to give Mel a present. Tears of relief welled up in her eyes.

Eliza looked at her husband's smiling face through the window. It's a smile she sees often, when he is taking on fights as a Street Fighter. It reminds her of the smile from a carefree child.