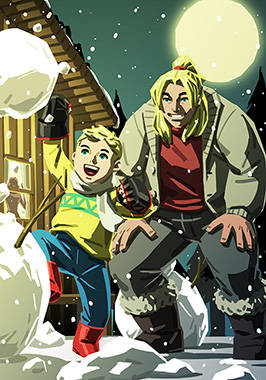 Ken, Eliza, and their son, Mel, have retreated to their winter home to enjoy the holiday season.
But as the snow begins to fall quietly outside, some uninvited guests show up...

"Hey, boys," Eliza called out to her husband and son from the doorway, "that's enough for today. Mel, it's almost bedtime."

Snow began to fall shortly after dinner. Four-year-old Mel grabbed his father's hand and dragged him outside to play. Ken agreed to play with the boy, but only until bedtime. They built a small snowman on the edge of the porch - and then destroyed it using kicks and punches.

"Aw geez, you're all wet." Eliza wrapped Mel in a towel as the boy reluctantly came back inside.

"But, M-Mommy, I'm not finished training!" he said, shivering like a soaked puppy.

"Your training can wait until tomorrow." Eliza smiled slightly as she dried her little fighter's hair.

"Heh, listen to your mommy, Champ," Ken said as he came inside, brushing the snow off his shoulders. He kneeled down and looked his son in the eye, clenched his fist, and gave him a big thumbs-up. "Let's call it a day. Tomorrow we can build an even bigger snowman! And how do we take down big snowmen?"

Mel stretched upwards. Ken picked him up and lifted him toward the ceiling, and then in the same motion rested the boy on his shoulders.

"Okay, let's save that for tomorrow. Next up on the training menu is bed. Eating and sleeping well are also important for becoming strong."

Mel was starting to nod off already. Ken patted the boy's head, while Eliza planted a kiss on his soft cheek.

Ken gave Eliza a glance before heading off toward Mel's bedroom, Mel on his shoulders, the pair of them talking as they went. Eliza smiled as she watched them disappear, the sound of footsteps becoming faint as Ken carried the boy up the stairs to the second floor bedroom. She gave a satisfied sigh.

Looking through the window, Eliza saw the snow fall through the darkness at a steady pace. A white blanket covered the ground for as far as the eye could see. She thought to herself that there's plenty of snow to build that giant snowman Ken promised. The New England night was quiet, but had a certain feeling of depth to it.

She moved away from the window and walked across the spacious, festively-decorated living room. Stopping at the fireplace, she took a dry log and threw it onto the fire, and watched as the flames rose, seeing their sparks reflected in the lavish ornaments that decorated the top of the fireplace. Her serenity was suddenly interrupted when someone grabbed her from behind.

Ken wrapped his strong arms around her and pulled her into his tightly-chiseled body. Eliza closed her eyes and allowed herself to feel his touch.

"Did our little champion finally go to sleep?" She turned her head to look into Ken's eyes.

"Yep. All that training must have tuckered him out." Ken's eyes narrowed as he spoke.

Eliza giggled to herself.

Eliza spun around in Ken's arms to face him. She giggled again. "Nothing. Just...watching you play with Mel...y'know, fatherhood really suits you."

Ken smiled as well. As a fighter, Ken has always taken things to the extreme. It carried him to the All-American championship. It's in his blood, as the inheritor of the Masters Foundation. Ken has taken on many roles and challenges over the years, and now his latest challenge is that of fatherhood.

"Being a father...it's nice. Working for the good of the family. Oh, speaking of, I've prepared our costumes for this year's party. Everyone's gonna love 'em!" His voice had a hint of mischievousness.

As if in answer, Ken drew Eliza in closer. Eliza stared into her husband's eyes, seeing the fire from the fireplace reflected in them. She thought to herself that this is the fire that caused her to fall head-over-heels in love. Passionate, flashy, and full of energy - he is like the embodiment of fire itself. His fire burns brightest deep within his eyes, to the depths of his soul. Even if you could get close enough to touch it, there's no one who truly understands his fire.

Suddenly, one of the logs in the fireplace splits open.

Eliza tightly clutches Ken. A small gasp escapes from her half-open lips. She closes her eyes and tries to immerse herself in Ken's fire.

Just then, a noise.

Ken gently separates himself from Eliza. He looks up at the ceiling. The noise is coming from upstairs. It's faint, but it is the definite sound of someone moving around. Did Mel wake up? Just as Eliza is about to make such a suggestion, Ken puts a finger to her lips. The sweet expression that was on his face just moments before has gone.

"I'll go take a look. If something happens, go straight to the panic room. Got it?"

It wasn't really a question. Ken knew that something was wrong, and let Eliza know in a way that wouldn't cause her alarm. Whatever was happening, he would take care of it.

"All right. Let's do it," Ken said softly to himself, and then moved off.

The carpet is thick, so his movements don't make a sound. Eliza watches him go with tears in her eyes. Save Mel!, she wants to scream out, but knows she can't. But then again, she doesn't have to: Ken will take care of it, whatever it is.

Ken silently makes his way up the stairs. He thinks to himself, the Masters Foundation has no shortage of enemies. This could be some idiot, thinking he can threaten his way into a better contract. Or it could be...

In the back of Ken's head a certain organization came to mind: Shadaloo. Ken faced off against the organization's leader in the past, the twisted M.Bison. A strong fighter, but he distorted the principles of martial arts to suit his own evil whims. Recent reports stated that Shadaloo was on the move again, conducting secret operations. Is coming here part of their insidious agenda?

Ken grits his teeth. I won't let them hurt my family. He goes toward the sound, like a savage beast ready to protect its herd.
Side readers : 03 「Unexpected Guests 」（Part II）