Welcome back to the second part of my talk! Let's pick up right where we left off.

I believe this goes for anything in life, but the feeling of growth is a wonderful thing. More than any other genres, fighting games are all about getting better.

Winning and growth may seem like the same thing, but early on there's a subtle difference between the two. Focusing only on winning at an early stage involves learning what the best moves or attacks are and using those to win. People who are usually good at action games will suddenly win a fair bit because of their experience, but at a certain stage they'll stop winning. At a certain point winning suddenly becomes not that interesting, especially if you're in a hurry to just win.

Let's say you hear from someone about a move that's super good. You're not going to understand why it's so good, and how to use it optimally compared to someone who invested the time to learn about the game. Everyone knows how to throw a Hadoken, but not everyone knows how to use it efficiently, and mimicking some famous player's style doesn't mean you know how to really use it.

Learning how to win early is one way to enjoy the game, so I can't knock it too much, but it doesn't match the feeling of getting better and finally winning over your adversaries. I want all of you to experience that kind of thrill when playing a fighting game.

But the fun of getting better is easy to forget once you start winning. Whenever you feel that the game isn't interesting, remember what I'm writing here and maybe you'll find yourself again.

Choosing a character is the first thing you do in a fighting game, and it's not strange at all to pick a character that's visually appealing to you. That's actually a great way, because you'll continue to LOVE the character you're playing.

It's not even about appearances either, if you see a character pull off an amazing move and you want to use it too, that's a good enough reason to pick a character. When I was playing Street Fighter II, I saw Ryu's Shoryuken and it lit a fire inside me; I wanted to finish every match with that reversal Shoryuken because I thought it was so cool to do it, so I practiced it daily. 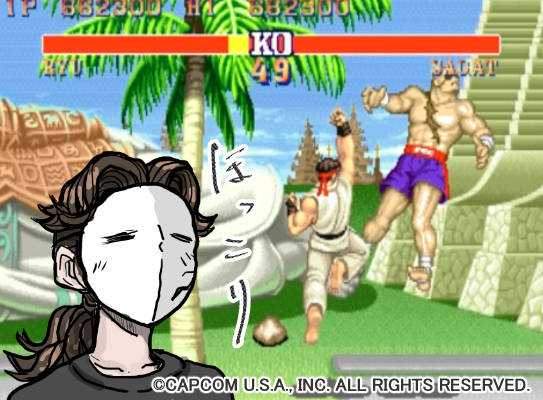 Ryu's Shoryuken is a thing of beauty. Finishing off Sagat like this is perfect!

If you pick a character that appeals to you, naturally you'll start to become better with them. Even if you have a move that you can't seem to use, you don't have to force yourself to use it. Mold the character into your vision, even if that means not using a certain attack. Just don't blame yourself or the character if you begin to lose because of that thinking!

When you're using your favorite character to fight, I think you'll be surprised at the kind of personality that comes out. It's interesting to see how most people's personalities really shine through when they get competitive.

In conversations people communicate personalities in a similar way.

But even if two people are a match, if what they're "talking" about doesn't mesh together, they can't engage properly. Aspects such as differences in skill and knowledge are hard to handle. That's why it's so important to continually improve your game.

As you improve your skills and knowledge base, you'll be able to interact with a greater variety of people. Perhaps you felt that a person you played against wasn't particularly fun to engage, but now that you know more, you might have a greater appreciation for their style and enjoy the fight.

When you start out, you won't know how to engage with other players, but one day it'll come to you in a flash and you'll start to understand. It's like you're not talking at all to someone but at the same time, you are. And hey, this is a fighting game, you don't have to talk to someone with words, just use your fists!

That reminds me, that group of people who don't listen? You can't engage with them, it's impossible. Even if you strive for engagement it's not particularly fun. Just play a couple of matches against them and leave them to their devices.

Fighting games may seem one dimensional but there are ways to enjoy them other than winning. If you're tired of one thing, you can always find something else to enjoy. Once you get really into the game it's easy to fall into the habit of playing just to win, but remember to take a step back every now and then and take a breath.

I tried to explain how you can enjoy a game regardless of what the game has to offer you, but obviously you will have games that you enjoy and hate. This may be because you can't find a character that's enjoyable to you, or you simply don't like how the game plays out. But when that happens it's always a good idea to try out something new to see if it fits. The best thing about fighting games is that there is a wealth of titles out there, each with their own unique design.

Fighting games can be enjoyed much longer than your usual games. When you find a favorite, you can bet that you'll be playing that game for years and years to come.