Let's go over the basic rules and knowledge you need to know when it comes to Street Fighter.
Today we'll talk about win/lose conditions and the basic game screen.


Note: This article uses images created for explaining the game, and may differ slightly from the actual game.

It may go without saying, but since this is a competitive game, the goal is to defeat the opponent and take more rounds than they do.

In most Street Fighter games, the first person to take two rounds is the winner, but keep in mind that players and arcade owners can change this setting depending on the game.
Since you have to take two rounds from your opponent, even if you lose a round it's okay, so long as you can win two.

Unlike winning a match, you can win a round in two ways. 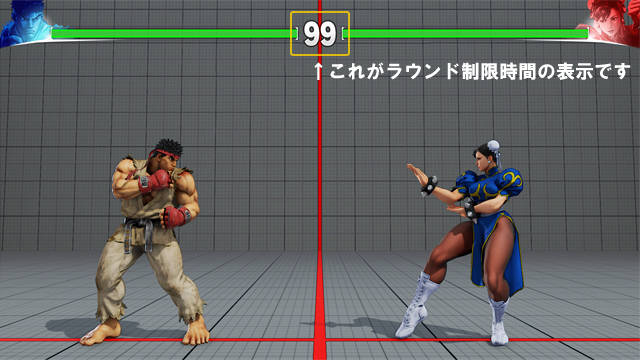 Health is the biggest indicator of how well you're doing in a round.

The character's health is represented by the green bar in the upper part of the screen.
You may hear this referred to as health or life, but don't get confused! They're the same thing. 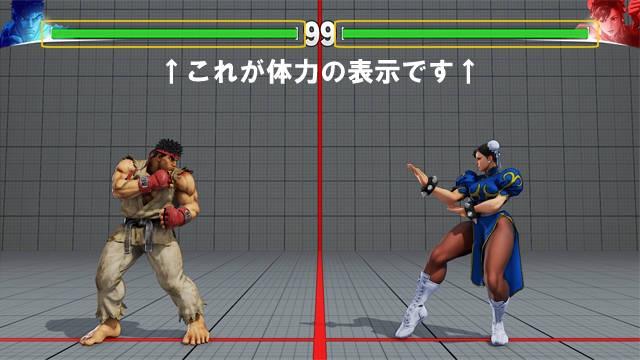 Health bars decrease and when it goes below zero, the round is over.

When the round begins, both fighters start with maximum health, and any health lost in the previous round is regained for the new round.
While the length of the health bar is the same for all characters, each character has a set amount of health.
For characters with lower health, they'll take the same amount of damage from attacks but their health gauge will decrease much quicker. 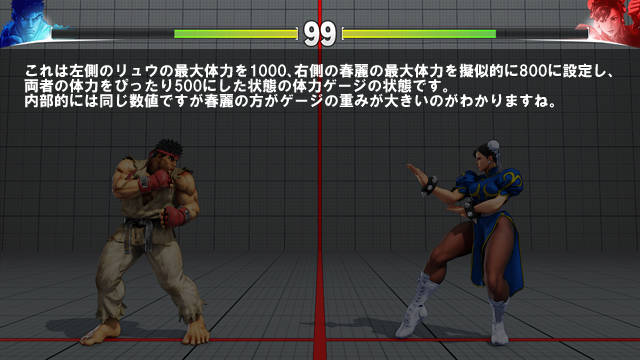 
Here, you can see the difference between having zero health and having a small amount of health.

We usually don't say stuff like "I have about 100 pixels of health remaining."

An important note, if your health is right at zero, the round will continue!
This is very important to remember! In fighting games, even if you're stuck at zero health, you can still make a comeback, so don't give up and keep giving it your all!

So I bet you're wondering "what happens if time runs out and both players have the same amount of health remaining, or if both characters are knocked out at the same time?"

Well, let's explain that, because it can get pretty confusing! We call that situation a draw game, but depending on the title it's handled differently.

Here's how each game handles a draw game.

The cute judge girls from Street Fighter III. They'll declare the winner of a draw game. 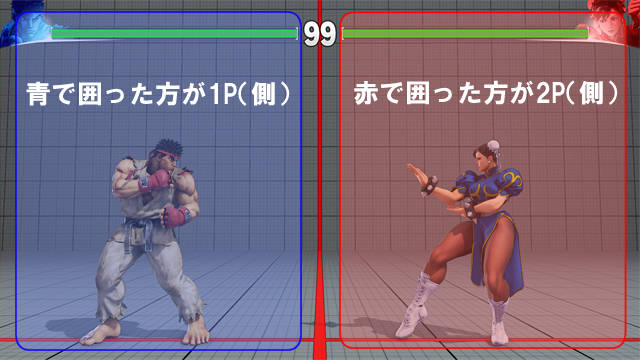 Player sides are predetermined at the beginning of the fight, and do not change until the match is over.
While characters may switch sides repeatedly during a match, important information such as their health gauge and messages about counterhits, etc., will not switch during a match.

Now, sometimes when people are talking about Player 1 and 2, they're not talking about sides, but about the actual character position.

Messages differ depending on the title, but you'll often get notices about things you pull off during a match.
We'll explain this at a later time.


That's all of the info you need to play the game.
Many people will say that fighting games have a lot of different systems, and you can't have fun without understanding them, but that isn't the case at all!
These systems are simply to create more depth to the game; beginners only need to know the simple basics to enjoy the game.

Don't worry about getting good quickly, take your time and learn at your own pace!

Learning the Lingo: Round Calls

There are different ways to call rounds in Street Fighter, so let's explain a couple that you may run into.

A perfect occurs when someone wins a round without losing any health at all.

Usually when people talk about Player 1 or 2, they're referring to the players controlling the characters, and which side they start on. However, this term is sometimes used when we're talking about the position on the screen, regardless of where the characters are.
This should be easy to understand in context though.


So that concludes the basics for now.
There's still a lot of ground to cover, and while the basics might be a bit boring to slog through, just take it at your own pace!