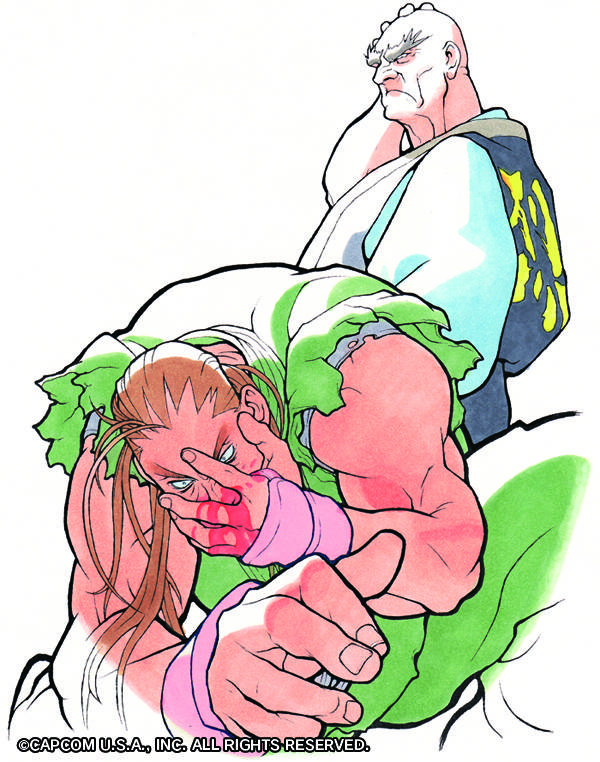 Dan was a character that originally appeared in Street Fighter Alpha, right?

Dan was the only one that was decided once I joined the team.

So that means you're basically the father of Dan, right?

No way!
Someone brought the design and said, so there's this one bad guy, but can we make this kind of character?

Haha, yeah. The designer said, well we only have space in the rom where Ryu and Ken's data is stored, but this won't take much space anyway so can I do it?

Only after Street Fighter Alpha 2 did Dan get his own unique movement and moves.

During Alpha 1, the only thing he had other than attacks was the special taunt pose*.

So a bunch of us worked together and then went to Funamizu-san for approval, and he was like "wow this is awesome", haha

"This is really awesome, actually", he said, haha. 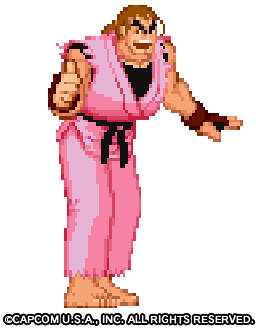 Wow, that was easy!
So once you added Dan, you did some balance tweaking on top of that, correct?

Yeah, but... we were pretty sinister.
Dan just wants to be like Ryu and Ken, right?
So we made him weak on purpose.

So we made only his Dan Kicks strong when they come out.
The idea was to make it seem like he can barely get his kicks off the ground, and if you hit with the base of the foot it's strong.

But his Dan Kicks ended up being too strong, so we had to make them weaker, haha.

Both Dan and Akuma were extremely secret characters.
But they weren't planned to be weak characters.

We wanted Dan to be a character that if you lost to him, you'd be embarrassed, but if you lost while using Akuma, you should feel embarrassed.
So if your opponent selected Dan, you had this huge pressure to not lose, haha.

Yeah, I can see that.
If someone challenges you and Dan pops up, you'd be freaking out.

The way we picked his karate gi was pretty interesting too.
We asked the designer what color looked the weakest, and he said pink or tea green, I guess, so we used those*.

*Dan also wears orange in addition to these colors.

So that taunt pose that we were just talking about.
We actually programmed it so that if you get a perfect round, it has a 1 in 256 chance of showing up.
It'd be something like if you saw Dan give you the thumbs up in the arcade, it'd be such a rare thing that no one would ever believe you, and you'd only hear it from your friends or other arcade patrons, since there was no internet.
But it really never showed up.
I did the QA check for it and I only saw it once or twice.
Dan didn't have an ending scene either.

I loved that he was always rolling, it was shocking when I first saw it, haha.

It was with Street Fighter Alpha that we got different levels of Super Combos introduced.
How did that come about?

Actually, that was never the plan when we first started working on Alpha.

Yeah, actually we were planning to have two super combos per character.

And the Alpha Counter weren't planned.
It was supposed to be an evolved version of Super Street Fighter II Turbo.

Then you had the Alpha Combos.
We wanted to have combos that were a little easier to perform and to make the user feel good, so they were an offshoot of super combos.

I see, so these were all created with the casual player in mind.

So I spent all night coming up with a design doc that had all of the characters super combos, complete with illustrations.
Then the next day, half of them were rejected!

But that's basically how the Alpha series unique game system came about, right?

The damage was greatly reduced coming from Super Street Fighter II Turbo.
It made for much more intense matches.
But I think if you set the dip switches* to the maximum damage setting, if Rose's level 3 Aura Soul Spark reflected Sagat's level 3 Tiger Cannon, I think it one-shots Sagat.

Three seconds into the match you'd have two super flashes and then the super combo KO flash screen or something, haha.
I was thinking, if someone was dumb enough to throw out a Tiger Cannon right at the start of the match, they'd have it coming to them if it got reflected and they got killed in one hit.

*Dip switches are what arcade operators used to modify game settings. Not only damage, but round counts, etc. It was basically the hand of god.

Well, if you ask me, that sounds perfectly reasonable!

I think most people at the time would've been fine with that.

Characters I worked on

So tell us about the characters you worked on.
What did you think about them?

I worked on Sodom, Birdie, Rose, and Adon.
I wasn't allowed to touch Ryu or Ken.
They only let me work on the second-string characters, hah.

But those are the characters that really made Alpha the series it was.
You can tell a lot of work was put into them.

We had a lot of standard characters already, so if I didn't work on these "one off" characters, there would be no reason for me to work on the game.

Rose in particular was a pretty crazy character. At the time I wanted to have her projectile reflects, create clones and counter Dragon Punches, and I got to do all of those.

I also wanted Birdie to destroy fireballs, and have a 0 frame throw.
I wanted to change up Zangief's throw whiff too.
Yeah, there was so much stuff to do on that game, it was all really interesting for me as the new guy.

Thanks to your work, the Alpha series became the gateway to success for all of the new hires.

Yup, it became a game that people like me, who've only been in the company for one or two years, were in charge of.


We're going to continue this later because it's just too interesting. But next time we'll talk about 3D fighting games!