First Round of Stages

Hey everyone, here are some stage ideas we had in mind during development.
With these ideas we tried to go with regional flavor without making them too dull.

This is totally different from the stage that made it into the game.
The overall design was great, it was too similar to a stage in Street Fighter Alpha 3 so it got revamped.

Again, this stage differs from the one found in the real game. You can see the ninja in the foreground here, who is actually this guy!
People wanted to have a bullet train and sakura trees in the stage so it got reworked.

A very cool, Asian-looking design!
This Shadaloo base used to be a temple!
We all thought it was pretty cool, but it didn't fit Bison's whole "take over the world" gimmick, so it got the boot!

Lots of cool-looking boats!
You'd think that in this kind of stage, Fei-long would make an appearance, right?
The China stage we ended up with was being built at the same time, so to not have any overlap this got cut.
Too bad!

An mixed martial arts gym, you can really feel like people would eat, live and breath in this place while refining their craft.
When this was being pitched, Laura's details hadn't been decided.
In the end we didn't feel this was a good fit for a Street Fighter game, so it got cut.

This is more like a Street Fighter stage!
However, a lot of people wanted to see the sky in a Brazil stage, so unfortunately this awesome stage got the cut. 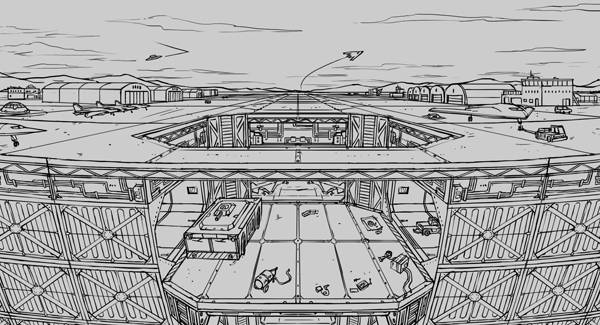 We came up with some gimmicks for this stage, which we covered earlier.
You'd slowly descend underground, which would cause our lighting efforst to constantly change, which we didn't like, so we cut this stage.

Man, we really wanted to give it a go with a stage on top of the water!
We'd have the boat constantly move so the background would change.
But you know... you can't have an Italian background but no Italian fighter, so we cut this stage from the running.

Ruins that have been exacavated and in the process of repairing.
Didn't fit our story at all.


And that's it!
We had a lot of great ideas for stages, but of course, part of Street Fighter's charm is exploring all the awesome countries in this world.

We especially had a lot of fun with Laura and her stages.
We came up with so many of them, and hopefully we can use them sometime down the road!