Hello, Street Fighter V director Takayuki Nakayama here, and I have a special guest today!
He's the father of the Street Fighter Alpha series, not to mention Rival Schools, Dragon's Dogma, and Devil May Cry. The one, the only Hideaki Itsuno!

We worked together on my second title at Capcom, and ever since he's been like a big brother that I look up to.

Fill us in on how you got involved with Street Fighter Alpha!

When I was still a new kid in the company, I'd come in 30 minutes early to clean up my workspace.
Usually I'd finish cleaning early, so I'd play games the entire time. Usually our competitors games, haha.

I always loved fighting games, so it was always a certain fighting game with yearly installments.
The one I played all the time was the '94 edition.

You were just playing our rival's games!

Yeah, because playing Capcom games was actually out work! Of course, all this playing happened outside of work hours.

During work time I'd be playing Capcom games, of course.
At the time we didn't have a QA department proper, so we had to do all of the bug-checking ourselves.

So during that time, Funamizu-san, my boss and overall great guy, tapped me on the shoulder and said "You wanna do Street Fighter Classic?"

Yeah, we'd abbreviate it as SFC. You know, the Super Famicom Golden Age.

I think at that time they had started porting Street Fighter to the Super Famicom.
Even the design docs at the time had "SFC" on them.

So at the time they had Bengus, who was creating awesome concept art of the first Street Fighter, and one thing lead to another and they talked about making it into an actual game.

Someone was thinking of the story, while my boss Funamizu-san was looking at the big picture.
But there was no game designer on the project.

In my first year at the company, they asked ME if I wanted to do it. 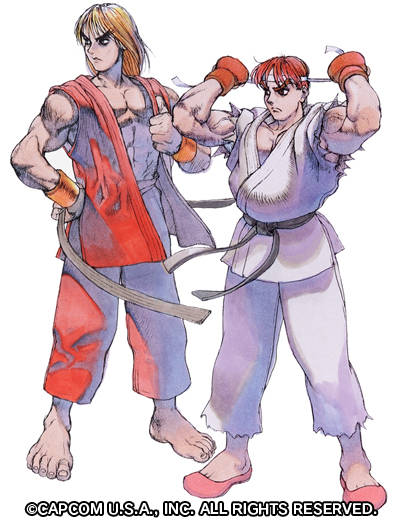 Ken and Ryu from Street Fighter 1, drawn by Bengus

So you know, I was really happy to be given the opportunity, but that didn't mean I had the confidence.

I played fighting games but I've never made one.
But as soon as Funamizu-san asked if I wanted to do it, I just said YES, LET ME DO IT, without thinking it through...

Hah, I know that feeling.
So that became Street Fighter Alpha, right?

Yup, at the time I was just the new kid with no real title, but I got the chance to work on Street Fighter!

Around that time, wasn't Street Fighter III in development?

Yup, a lot of the "real" aces went to that project, and eventually everyone went there, so there really was no one available.

On top of that, with the CPS2 appearing everywhere, we were also asked to create something on CPS1 to help get through the available stock we had.

Ah... we already wrote about Yasuda-san.

Despite having the best arcade board for 2D fighters in the CPS2, we also had to develop a version for the CPS1.

Basically, it became a hit and then a CPS2 version was also made.

Yeah, at the time the CPS2 was available via rental. Since they were rented, they came back to us and we always had in stock.
So this time they wanted to sell the hardware instead of renting it out.

From the very beginning we were planning on porting the game to the Super Famicom, so once the game was finished, porting it was pretty easy.

At the time we created this special program to deal with the display for the CPS1 and CPS2.
Visually it looks the same but the design is different.

Then we had another wrinkle thrown in for good measure.
We had to make a version for the rental boards too.

What!? Even when you made the version just for sale??

Yeah, we made the sale version, and then we had to go back and make the rental version.
So our rental stock didn't go down at all, haha.

But it was in preparation for if we made something like Street Fighter Alpha 2 or something.
The end result was a nice, long life for the CPS2 board.

Even then, we had Street Fighter III and the CPS3 board.

Basically, if Street Fighter Alpha didn't come out, there wouldn't be any more CPS2 titles?

When I joined the company back in '94 it was amazing. The CPS3 was going to be the home for the true successor in Street Fighter III, and with the CPS2 we were making Darkstalkers, Saturday Night Slam Masters and X-Men.
Follow that up with Marvel Super Heroes and it was astonishing how many fighting games we were making.

Until that time Capcom had the reputation of developing only Street Fighter II iterations despite fighters being super popular, which was the opposite of a certain Osaka rival company, who was putting out a lot of different fighting games.

"What the hell are you doing, Capcom!?"

That's what me, and I suppose a lot of fellow gamers were thinking.

But when I joined the company, I was amazed at how many projects were running at the same time!

You had one title were you'd be flying in the air freely and pulling off Aerial Raves beside a title with amazing, butter-smooth animation...

And another game where you'd throw your opponent right through the ground!

Yeah, just like that famous scene in Training Day. BOOM.
Around that time, so many fighting games started their development.

The Super Street Fighter II Turbo location test was on the same day as my entrance exam for the company.
Even though it was an arcade game they still ran TV commercials for it.

Oh yeah, they had those!
They had a real-life Cammy too, she was super cute! 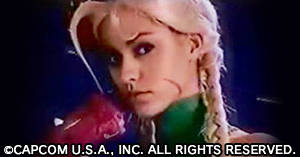 Back in the day, Capcom's fighting games didn't have this rep of being just for the hardcore player.
But on the other hand, I think that other Osaka fighting game company was more for the casual users, and tried to offer up what users were demanding.

They had that "special" game about hungry wolves*, for example.

*Note: In this game I used that small old man (not the Judo guy). Itsuno-san used that character that attacks with kicks from the air that had uh, flashy undergarments. He picked her because in the SFC version, the super moves were super easy to pull off.

That's what they wanted to aim for, I think.
Get some new blood that's closer to the fans and still has their way of thinking and awareness.
I think that's why I was asked to join the team.

Yeah, it was his second year at Capcom, haha.
He was seriously drawing up a storm.
The Street Fighter Alpha poster was actually done by someone who joined the company in the same year that I did!

From the beginning Capcom was never worried about sales of the title.
They just wanted to get rid of stock, so they figured if you use some of the new guys to do what you want, you should go out and do it.

And that's why it was such a challenge, in a good way.

We didn't know what we were doing, we didn't have much in the way of animation, and the polish was something that we tried our best to do.

I heard the dev cycle for the game was extremely short too.

SUPER SHORT.
I joined the team in the December just before the Hanshin Earthquake, and we had the location test in America the following May!

So it was basically half a year?

Basically, yes.
The release was in the summer.

But I think the thing that takes the most time, animation, took priority, but still took a while to finish.
We didn't have any producers to manager schedules and had no idea how much things cost.

We just basically did the work and created stuff without thinking about that.

I see, and that's how you made this gigantic hit.
You at least got a raise or something, right?

Is there any reason why the Final Fight characters showed up in Street Fighter Alpha?

So we were thinking about making a game that happened before Street Fighter II, so it seemed natural that the Final Fight characters would show up since they're from the same world.

However, the fighters were already settled before I joined the team because they had to start making the animation. 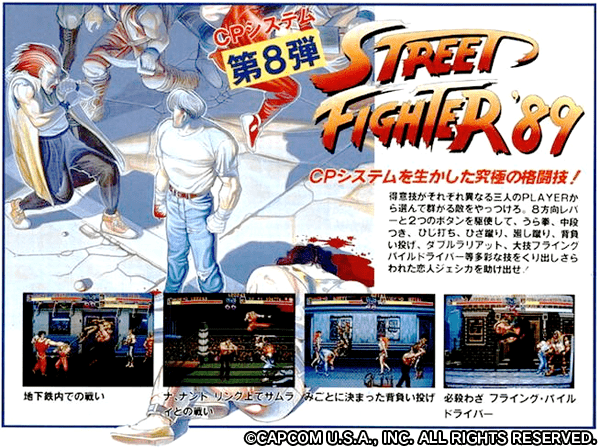 I thought that Sodom was a really good pick for the game.

Yup, he was really strong in Final Fight, so it made sense to choose him.
I guess he left a lasting impression on players, haha.

He chopped up a lot of players with that katana of his back in the day. 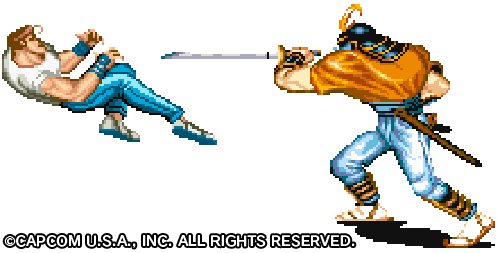 But you didn't get the idea for Daikyo Burning* from there, right?
I really liked the idea of scraping the character to burn them.

*Note: Grab your opponent, and scrap them along the ground, burning them!

Yeah, we got it from that manga starring Arashi*, haha.

*A famous story about a boy who could spin an arcade stick 2 million times in a second.


Whew, this is getting long, we'll continue this next time...