Today I want to introduce a special person, who I was involved with as Shadaloo's secret side-scrolling action designer. It's Kevin Striker from Street Fighter 2010!

However this wasn't a fighting game, but rather a side-scrolling action game in a similar vein to Mega Man, Ghosts N Goblins, and Strider. It was a science fiction title set in a parallel universe. 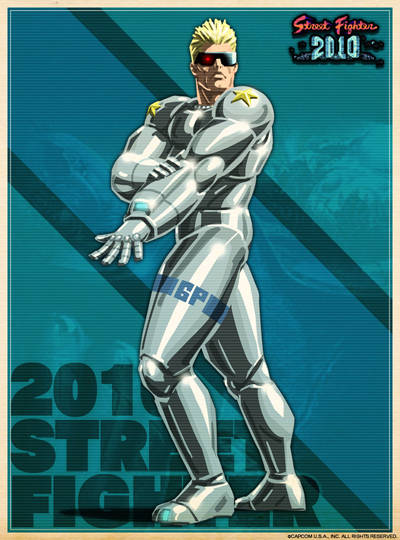 In the year 2010, all of mankind immigrated to another planet, but some were infected by "armored insects" that transformed them into evil criminals known as Parasites. Kevin Striker, a galactic cybernetic police officer with the code name MX-5, took the fight to the Parasites.

Kevin is capable of firing energy bullets and sonic blades as he punches and kicks enemies, and can escape danger with a quick flip jump. During this flip jump, Kevin is invincible, and if he can acquire a Shield Capsule, he creates flip shields from his feet that doubles as an attack and a form of defense.

As he battled the Parasites, Kevin's body began to cry out in pain, despite being a cyborg. Why is he feeling this sensation?

By the way, in the North American version of the game, Kevin was renamed into Ken! The story goes that after winning the Street Fighter tournament, Ken returned triumphantly to his home country where he started to study at his local university(!)

Then 25 years later (!) his lab partner Troy was murdered, and thus Ken began a new path in life.
(yes, all of this is still in the parallel universe)

This game was consiered extremely difficult due to the unique controls. Even though the Sonic Blade weapon shot projectiles, you couldn't fire straight, hit far away targets, or even crouch and fire. It was definitely a tricky weapon to get a handle on!

If you were able to power up it was really awesome! But if you took some damage you powered down! Yup, it was a Capcom game all right, no mercy for the weak!