Side readers : Musings on a Still Night (Part 1) 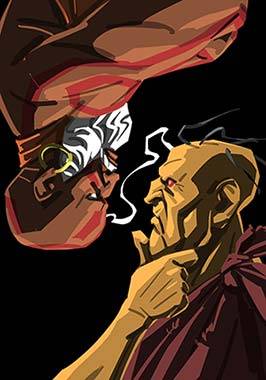 The old man Oro has paid Dhalsim a visit on one moonless night.
"Prepare me anything, even some curry," Oro said in a joking manner.
After Sally, Dhalsim's wife, prepared the old man's meal, he went quietly mumbled to himself.
"What is power?"

Musings on a Still Night (Part 1)

Musings on a Still Night

The sky was deepest purple, showing not a sliver of moon.
As they finished their meal, the guest refused his host's offer of more chai with a shake of the head, and followed him out to stand on the porch.
Fading traces of the afternoon's heat whispered in the breeze. It was tranquil here; airy, dark, and still.

"A wonderful meal. Splendid! Now I have tasted real curry. You Indians have a superb approach to cuisine." The guest's voice was tinged with age but resonant with satisfaction. He wore a single ragged loincloth, and the breeze ran through the sparse hair on his head.

He called himself Oro. A hermit, a Sennin.

Dhalsim, the Hindu priest, curled his lips into a wry smile.

"I'm glad you are satisfied with the meal."

He would not be so crude as to tell his guest the meal was not curry, but masoor dhal. Either way, Sally's stewed lentils were the best in the region, so the old hermit could call the dish whatever he liked.

There were more important issues.

Dhalsim faced Oro in silence. He was well aware that the ancient hermit and master of Senjutsu had not sought the company of the Yoga-trained priest merely to enjoy a meal.

However, Dhalsim asked no questions. He was content to wait.

Oro was silent for a moment, and then spoke as if conversing with the night sky.

"What do you make of this Psycho Power?"

Dhalsim could have guessed the hermit might broach this subject. Psycho Power... He thought of the evil organization that had once tried to take over the world.

The malevolent power Oro spoke of had been desired, sought, and claimed by the leader of Shadaloo. Years had passed since Dhalsim put his life on the line to rid the world of Psycho Power, but recently he had felt the tremors of its presence once more.

"That power is too much for any man to possess."

The hermit hooted with laughter.

"What a blunt answer! So serious! So boring."

"What about your Yoga, eh? I suppose that's perfectly safe, and only good for street performances?"

Affronted, a ripple of anger muddied the waters of Dhalsim's soul. To have his art--the path he had devoted his life to--ridiculed, was almost too much to bear. But the patient priest steadied himself, seeing the playful taunt for what it was.

"No, Sennin. If used incorrectly, Yoga can also be a dangerous power."

"Hmph. Yes, I know." Oro shrugged, seeming glum that he had failed to get a rise out of his stoic host.

There was a pause as each man contemplated the night. Then, Oro snapped a clenched fist out before him. The movement was sudden enough that Dhalsim felt it shift the air. It was a fist that looked too sturdy for an old man, too sturdy for any mortal man, a tangle of rock-hard bone and sinew honed by countless years of training. It was a fist that now glowed with blue-white phosphorescence. This was the power of "ki," a product of training and self-discipline. A pinnacle of martial prowess attained by those select few fighters who transcended the natural in their pursuit of championship. Dhalsim squinted as the old man's fighting spirit burned brighter and brighter from his fist.

And suddenly, it was gone. Oro unclenched his fist and the light scattered like fireflies. The movement, from start to finish, had not been an attack. The old man, for now at least, did not mean to fight.

"That was ki-based power; you've seen it before. A plaything for youngsters."

He thought of those he had encountered who followed the path of ki mastery. To the hermit they might have appeared to be simple youngsters, but they were all highly disciplined fighters.

Oro's eyelids drooped in concentration. His feet crept across the floorboards as he lowered his stance. A breath hissed into his nostrils. Another.

Danger. Dhalsim's body seemed to know it before his mind was aware, sliding into a defensive stance of its own accord.

There was a shift in the air. Stroked by a pull that seemed to warp the very darkness of the night, Dhalsim's skin broke out in goosebumps.

Oro's breath rattled like a rumbling in the ground.

His eyes, usually so impenetrable, became the red of a wild beast, and his fist was swallowed by a smoky blackness that shamed the night sky.

Instantly, Dhalsim's decision was made. The two men who had been talking so casually were now separated by a killing blow's length. And knowing that to retreat a foot...no, even an inch...would invite that killing blow, Dhalsim had but one choice.

His fists whipped up before his face in a pose resembling a prayer to the god Agni. Where moments before there had stood a dinner host, there was now the fighter Dhalsim, prepared to defend his life. He had launched a thousand times a thousand attacks from this stance. A strike from this Sennin wreathed in death could be neither stopped nor dodged.
Instead, he would risk his life.
On a single attack, the product of all his training and experience.