As an indoor map, the routes here are quite easy to get a feel for quickly.
Let's go over what's available and what you might be able to expect from the opposing team. 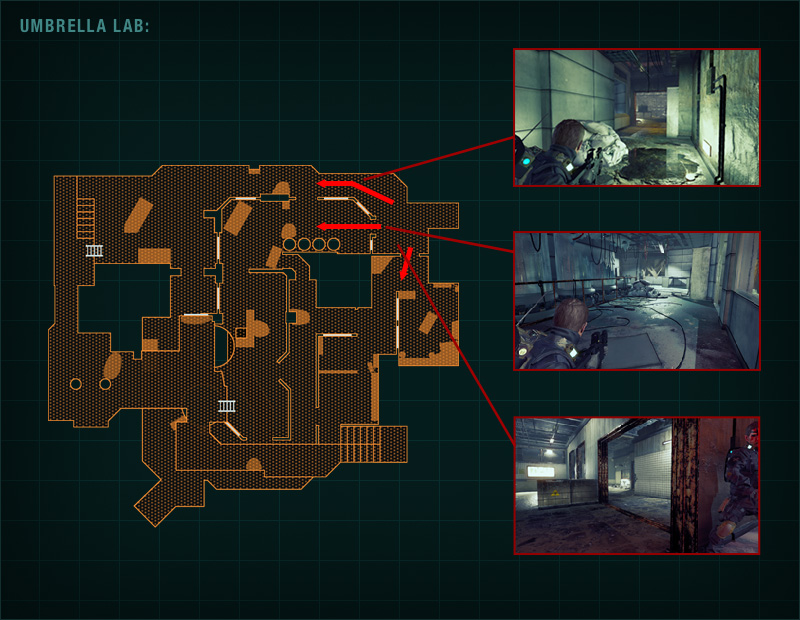 These are the routes when starting on the ground floor.
Since there are exactly three it can actually be advantageous to camp here and avoid being attacked from behind, in fact this might even be the most common decision here.

Keep an eye out for enemy patterns

Like the Mansion, the routes in this map are straightforward.
Use this to your advantage, as the quick pace and simple routes tend to result in players using the same route over and over again.

No location in this map is completely safe. The small size means you need to watch out constantly for attacks in front and behind you.
You'll find that most encounters occur in the yellow zone highlighted below. Although there are multiple routes that lead there, there are no guaranteed escape routes; victory on this map is entirely down to player choices.

This is why it's so important to learn the patterns, because there aren't that many responses and simply knowing what to do in each situation will earn you the win more often than not. These are what I think are the most obvious routes, but there are others of course.
This might seem obvious, but if you're both searching for the other team then you'll usually meet somewhere in the middle.

Read ahead and secure the dominant positions

You can start to predict the enemy's route by the sounds they make when moving or shooting. Once you've narrowed down the options, pick one and start planning accordingly. If you realize you were wrong, move on to the next option. This isn't just a general numbers game, it genuinely raises your chances of winning.
The most important element here is cover.

When starting below, I find the following three positions are most commonly used.

As the triangular vision cone suggests, you may be vulnerable to attacks from outside the cone, but if you managed to correctly predict the enemy's movements then you'll be in an incredible strong position, as these positions have pretty good range. 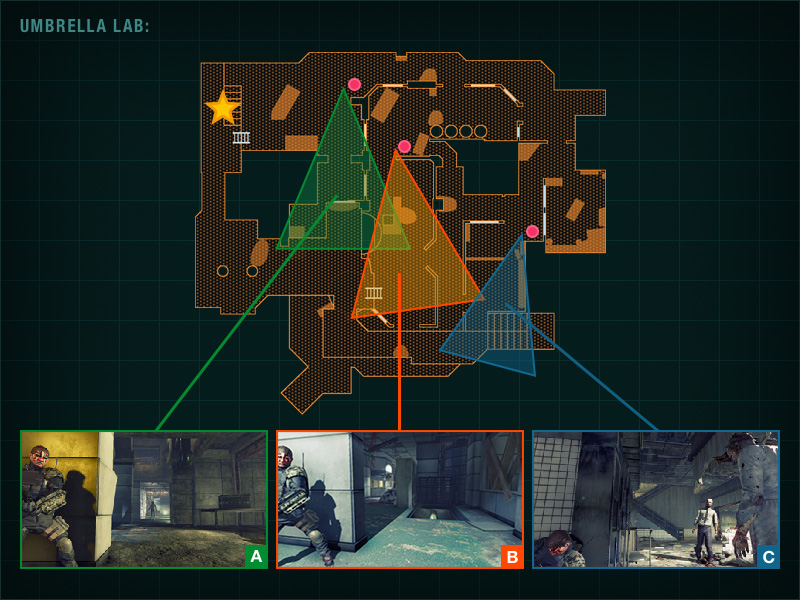 AB A and B are particularly vulnerable to attacks from the second floor, marked with a star. Depending on the actual layout, you may have the protection of a shutter, whose opening noise will instantly warn you of any enemy attacks.


C Guarding the stairs from point C is very important.
Your biggest weakness here is behind you on the right. If you hear footsteps, fall back immediately and guard your rear.

Make yourself less predictable with shortcuts

While attempting to read the enemy, you must be careful not to fall into the same patterns yourself if you want to win. One way is to move fast right from the start to give your opponent less time to come up with a plan.

The following wall climbs are great for this.

These walls can be climbed. They might not faze players who already know them, but if they don't then you can get an easy surprise attack from an unexpected angle.

A map for vertical combat

This is also one of those maps that has certain advantages depending on which floor you are on.
Here are some of the pros and cons.

✓There are multiple cover points below, it takes time to check all of them.
×You may be spotted by the enemy first
×Low obstacles won't protect you from fire

✓You can often spot the enemy first
×It's easier to be surrounded and / or pursued
×There are a lot of mesh floors, and you can be shot at from below

As far as we can tell from the data we've been receiving, most fighting happens on the ground floor.

Attacking through the mesh floors

From below, the yellow lines delineate those areas that can be shot through.
A large part of the lab's second floor features this mesh.

The red circles are where players tend to camp.
It's hard to see from the picture, but the lower right circle is slightly concave and a great spot for crouch camping.


Here are some of the better strategies for attacking from below. A It rarely ends well if you go head first here, wait for them to come down instead. Get down low enough and they can't even see you.


B From here you can check to see if anyone's above without being seen.


C Similarly, here you can wait to pounce on anyone who comes down the stairs.

Because the Lab is an indoor map with easy routes, I tried my best to pair it up with an overview of this game's unique analog cover controls.

Keep your strategies fluid and steer clear of clichés , and you'll wipe the floor clean.

Most people expect shotguns here, and the paths most players follow right at the start are usually the same, no matter who's playing.

Next time I'll be covering how to take care of opponents using analog cover.