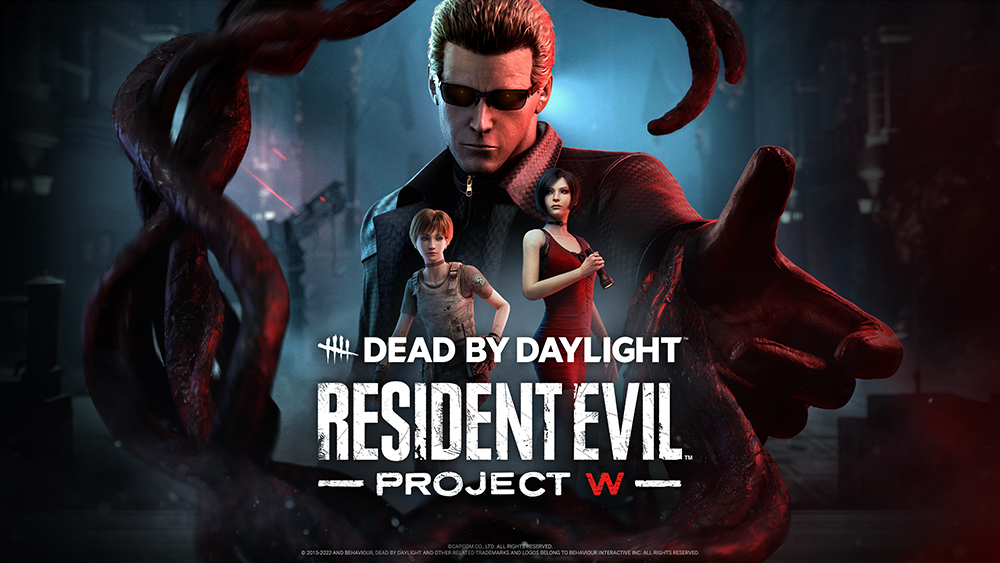 Resident Evil pairs with the asymmetrical horror game Dead by Daylight again for another terrifying team-up!
For those who haven't seen the updates, I'll be going over the ins and outs of the collaboration here!

First, let's take a look at the map of the renovated R.P.D., divided into East and West wings.

The crashed helicopter as it appears in Dead by Daylight. The crashed helicopter from Resident Evil 2 in all its burning, mangled glory.

In the original game, you extinguished the flames only to be greeted by the hulking horror that is Mr. X―a memory that still threatens to make my heart jump out of my chest! 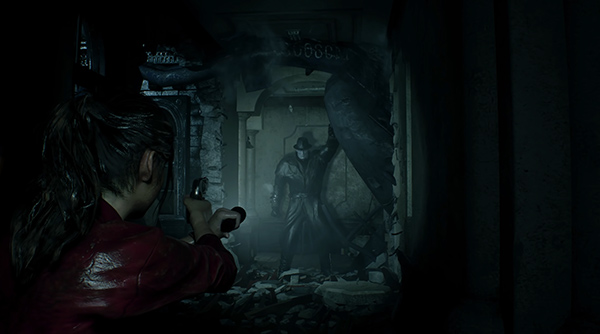 The moment I almost had a heart attack. From Resident Evil 2.

In Resident Evil 2, you had to solve puzzles where you match images to get medallions, which varied depending on if you were playing Scenario A or B. 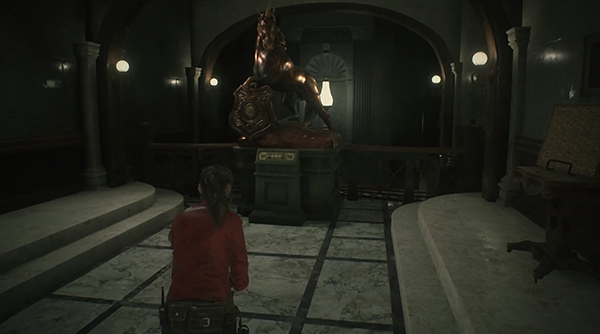 The unicorn statue from Resident Evil 2.

While there are no puzzles to solve in Dead by Daylight, the statue still serves as a nice landmark in the sprawling landscape of the R.P.D.! 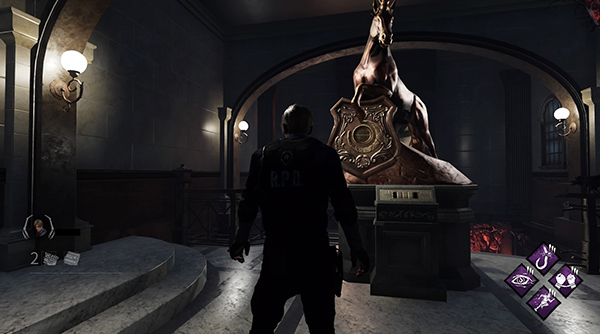 The unicorn statue in Dead by Daylight. Just like the one back in Raccoon City! 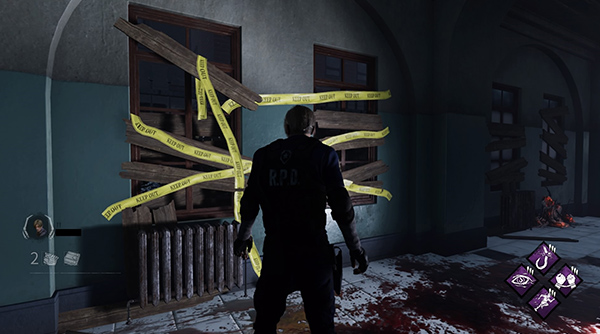 The west hall in Dead by Daylight. You can still hear the zombies wailing...

Get close to this corridor and you can hear zombies moaning away. I bet there's a horde of them outside the window, just like in Resident Evil 2. The west hall in Resident Evil 2. Scariest. Hallway. Ever.

In Resident Evil 2, you had to board up the windows to prevent zombies from crawling in, but in Dead by Daylight, the work's been done for you. Thank you...whoever you are.

Dead by Daylight makes use of all sorts of sounds. You can hear the groans and grunts of zombies every time you pass through this hallway. I know them well, but they still send a chill down my spine. 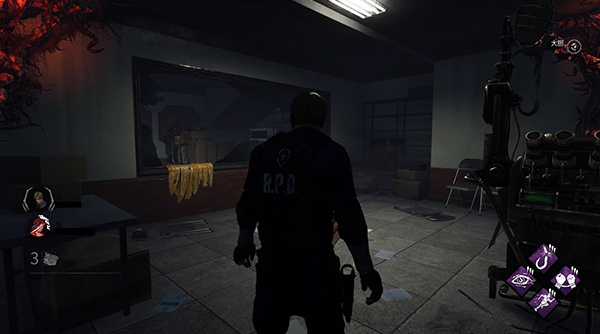 The Interrogation Room in Dead by Daylight.

Oh, if only I could forget this room! This is where a licker jumps out when you grab an item in the back! It surprised me so much I almost dropped my controller! I bet this place was traumatic for a lot of you. I know there isn't a licker here in Dead by Daylight, but I involuntarily start to tense up whenever I enter. In Dead by Daylight, I still need to tread carefully, I never know who will be waiting for me around the corner… Now, let's talk about Wesker, who appears in Dead by Daylight as a Killer. As a Killer, Wesker has access to a special attack calledVirulent Bound. It reminds me of when he dodged all the bullets Chris and Sheva tried to pump into him in Resident Evil 5. If Virulent Boundlands on a survivor, Wesker grabs them by the jaw and lifts them up. Wait, that sounds familiar... 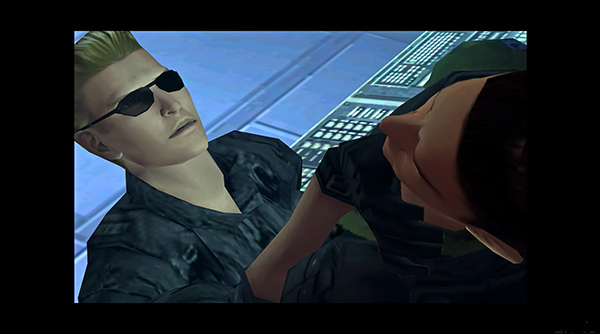 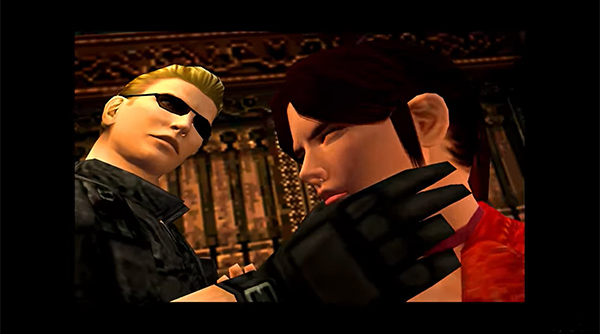 Now where have we seen this before...? From Resident Evil Code: Veronica.

I'm sure you guys already figured it out, but Wesker can pull off Virulent Bound thanks to the Uroboros virus he was infected with in Resident Evil 5. Seeing Wesker infect Survivors and wander around with his hideous appendage takes me back to that game. Wesker from Resident Evil 5. So many bad traits. So many good memories.

Both Wesker and the previously introduced Nemesis can infect survivors like in their original games. It's this attention to detail and faithful recreation of not only characters and maps, but also abilities from Resident Evil that made this experience a real treat for me.

Also, in Dead by Daylight, Wesker occasionally speaks! One of his lines is from Resident Evil 5! The immortal: "Seven minutes. Seven minutes is all I can spare to play with you." This gem was spoken in the heated battle where Jill was mind-controlled by Wesker. When I heard this line in Dead by Daylight, I got so hyped I yelled, possibly waking up my neighbors... In Resident Evil 5, Wesker kindly leaves after seven minutes pass, but when I first fought him, he killed me over and over again before I could get him to go away...

I've got a newfound appreciation for Wesker after playing as him in Dead by Daylight. He's a talker in this game, and I get so excited every time I hear him say things like "Poor performance, indeed." and "Are you trying to make me angry?"

Let us know what you guys think about Dead by Daylight: Resident Evil:PROJECT W on social media using the #REBHFun hashtag!