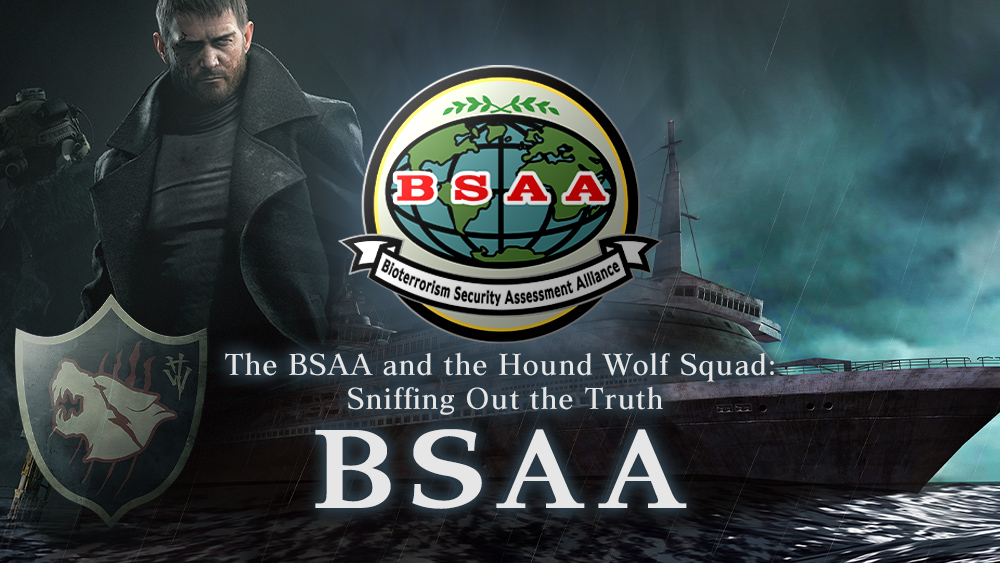 The BSAA and the Hound Wolf Squad: Sniffing Out the Truth

Have you already checked out the recently announced "Resident Evil Village Gold Edition"?
This includes long-awaited the new Third Person Mode, the extra mode with additional elements "The Mercenaries Additional Orders", and the new story mode called "Shadows of Rose" are all too much to look forward to!

Resident Evil Village follows the previous game's protagonist Ethan Winters on his quest to save his daughter, but who should come in to up the excitement? Chris and his Hound Wolf Squad! Each member has a code name. So badass!

But just who are the Hound Wolf Squad? The game keeps it a mystery.
Essentially, the squad is a select group of elite soldiers from the BSAA led by Chris Redfield.
That means to get to know the Hound Wolf Squad, you need to know more about the BSAA!

The BSAA is the Bioterrorism Security Assessment Alliance, an organization formed to counter the surge in bioterrorist attacks around the world after the infamous Raccoon City Incident.

This is the emblem of the BSAA North America Branch. Each branch is represented by a different color.

At the time, the BSAA was a civilian-led NGO, but given the ever-increasing number of bio-terror threats, the group eventually received permission from many countries in the UN to move across borders freely and put an end to the carnage.
The BSAA is headquartered in Europe, with branches all around the world. Wherever a bioterrorist threat surfaces, the BSAA is ready to respond. The BSAA has its eyes all over the world and, given the constant threat of bioterrorist attacks, can't rest for even a second...

Not afraid to place themselves in harm's way, the BSAA is a brave group dedicated to their jobs and to keeping the world safe. However, they do receive funding from pharmaceutical corporations, making them susceptible to political influence.

The first members of the group are called the "Original Eleven," two of whom are Chris Redfield and Jill Valentine. Let's take a closer look at some of the group's members. Chris and Jill on the cover of Resident Evil 5: Alternative Edition. The dream team from the first Resident Evil game!
These two helped kick off the entire series, and are so iconic they've even debuted in fighting games!

First, let's look at the macho man himself, Chris Redfield!
Chris is essentially the frontman of the series, having served as a member of S.T.A.R.S. in the first game's Mansion Incident.
He's Claire's brother as well, and after seeing him go through the horrors of each game, it's clear he has a strong sense of justice, and that there's mutual trust between him and his teammates on missions.
Unfortunately, those working under Chris always seem to go through hell, but I'm sure those who make it are glad to have Chris around, and view the hardship as just part of the job. Chris and Piers in Resident Evil 6. That game really showcased how much Chris looks out for his team. I'd love to have a guy like him as MY leader!

And we can't mention Chris without his long-time partner, Jill Valentine!
Like Chris, Jill was a member of the S.T.A.R.S. Alpha Team. She was the only woman on the force.
She's appeared in a number of Resident Evil games, each one showing just how badass she is.
We see her musical talent on the piano in the first Resident Evil and her combat prowess against an obstinate creature in Resident Evil 3: Nemesis. However, we do see her brainwashed in Resident Evil 5... Jill with her unrelenting stalker Nemesis in Resident Evil 3. Only Jill could escape a hulking horror like him... Here's Jill investigating things on the Queen Zenobia. It clearly wasn't a pleasure cruise for her...

Next up is BSAA representative Clive R. O'Brian.
He hasn't appeared in many titles, but without him, the BSAA wouldn't be what it is today.
Much like with Jill, we see Clive in action in Resident Evil: Revelations. He's sharp and tactful, and highly trusted by members of the team. Check him out in the game if you haven't already!
Eagle-eyed players of Resident Evil 7 Biohazard will also remember that Clive is an accomplished writer, having written a particular book found in the Baker residence... Clive may bark orders at Chris and Jill, but there's more to him than that. Anyone else getting Columbo vibes from him?

Finally, let's take a look at Rebecca Chambers!
Rebecca served with Chris and Jill as a member of the S.T.A.R.S. team, and helped them. Even Wesker admit her ability!
Though she appears in the first Resident Evil, we don't really get to see her in action until Resident Evil 0. That scene where Rebecca and Billy salute each other, though... Really shows how close they got surviving hell together. *cries*

Rebecca can also be seen in the CG-animated movie "Resident Evil: Vendetta" and other media.
And you can also catch a glimpse of the "rising rookie" in a photo you find in Resident Evil 2.

So now that we've covered some of the BSAA's members, it's time to talk about the Hound Wolf Squad from Resident Evil Village. Each member specializes in a particular skill, providing Chris with invaluable assistance on their missions.
The highly trained operatives have no trouble keeping both Miranda's minions and Ethan in check. Their relationship with Chris goes beyond the typical commander-subordinate dynamic, which you can see for yourself in the game!
What are they after?! What does their connection to Chris and the BSAA mean?!
Play Resident Evil Village and see if you can come up with some theories!

And that's all I've got on the BSAA and the Hound Wolf Squad for now. Let us know your thoughts on these groups on social media with the #REBHFun hashtag!