This is the first outside map we've talked about so far.
There's cover available, but it's still possible to see pretty far by climbing on cars and other objects, and this map tends to see more longer-distance fights than others.

As it's possible to climb over the cars as well, the enemy can close the gap very quickly if you are spotted, and there are also a lot of gaps you need to watch out for.

Raccoon City essentially has no safe spots and you need to be constantly on guard. You'll need to stay hidden and hope that you spot the enemy first. 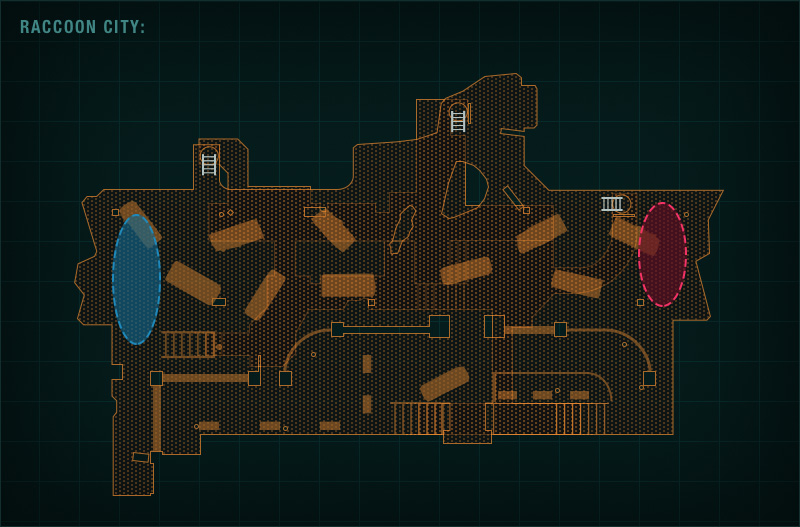 I've marked the start positions in blue and red on the overhead map. 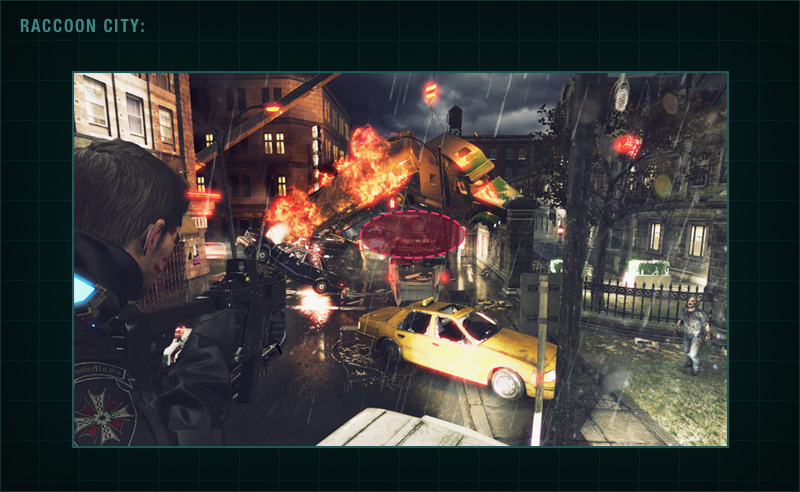 Here's the view from the car under the blue start. The red start can be seen in the circle. You risk being spotted when standing on high ground.

Not many routes above

Since we're outside there aren't any corridors or similar passages. The cars form a kind of route, but as it isn't contained there's nothing stopping players from leaving it.

This makes it hard to use the route predictions I've talked about previously. 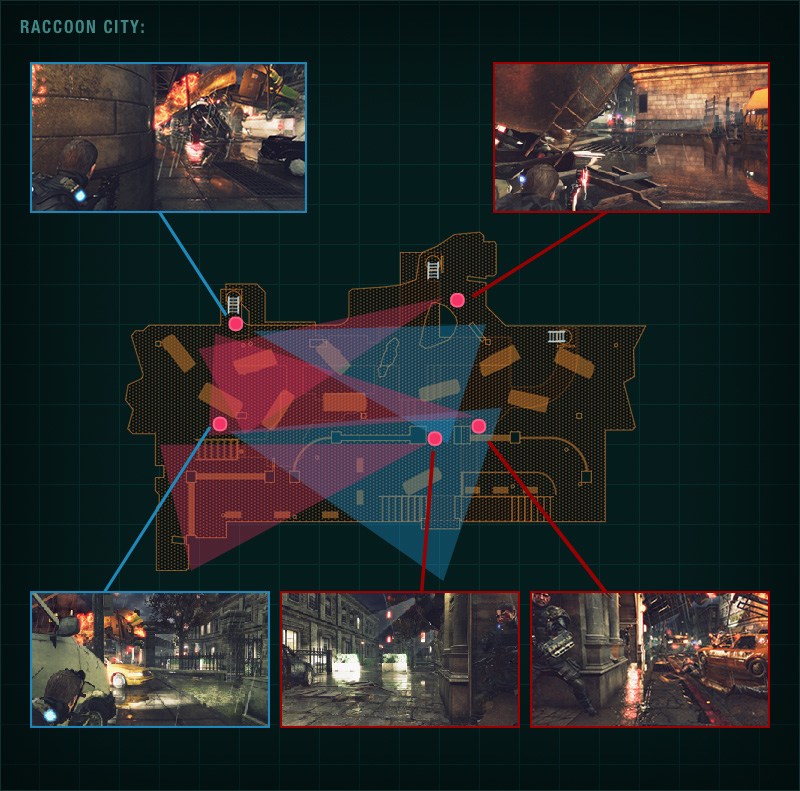 Here's a layout of one of the most common guarding setups I see. It doesn't look like there's much to be had in the way of cover here...

If you head underground however there are multiple ways to get behind the other team, especially considering just how much terrain each player needs to watch over.

There are also other positions that can fire on this setup while remaining relatively safe, making these points actually quite weak.

There are other easy to guard areas, so make sure to switch out your positions each match and tailor your strategies according to the enemy's patterns.

Taking out opponents above is best done from below. Climbing stairs is relatively quiet and should keep the enemy from noticing.

The routes are simple as well, as are the points you need to control, meaning whoever gets there first will have the advantage. 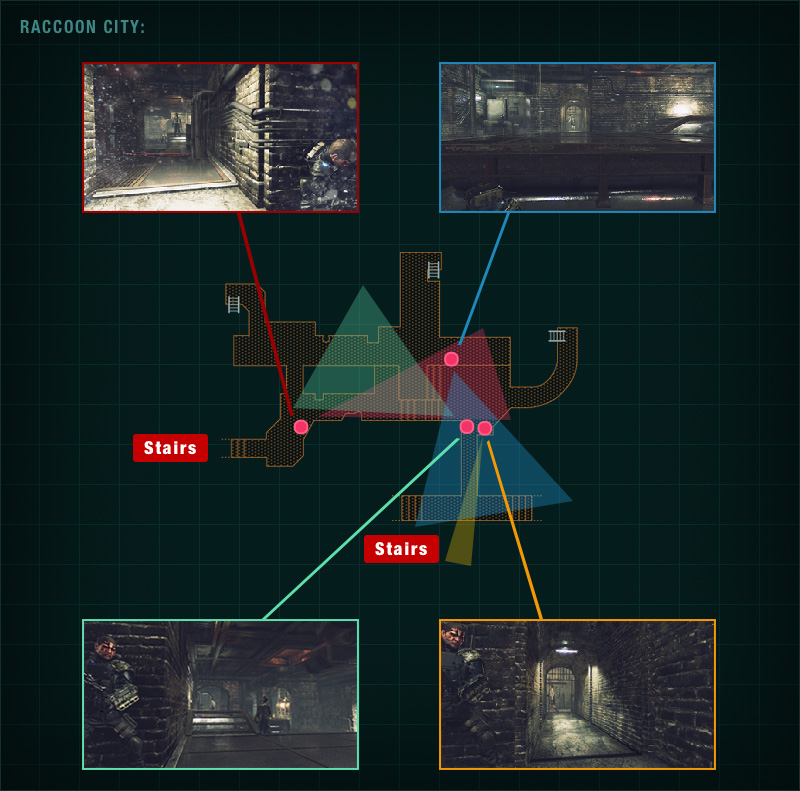 You're going to want to cover the stairs, which will look something like the layout above.
I find that a lot of players tend to hang around the blue triangle towards the end of a round.

There are few entrances, so guarding these points well should mean consistent kills right?
You might think that, but there's actually a little-known countermove to this kind of situation.

Most of these points can be attacked from above.

Here are those points again, try shooting opponents from here next time you see the setup, I think you'll find they'll be quite surprised. 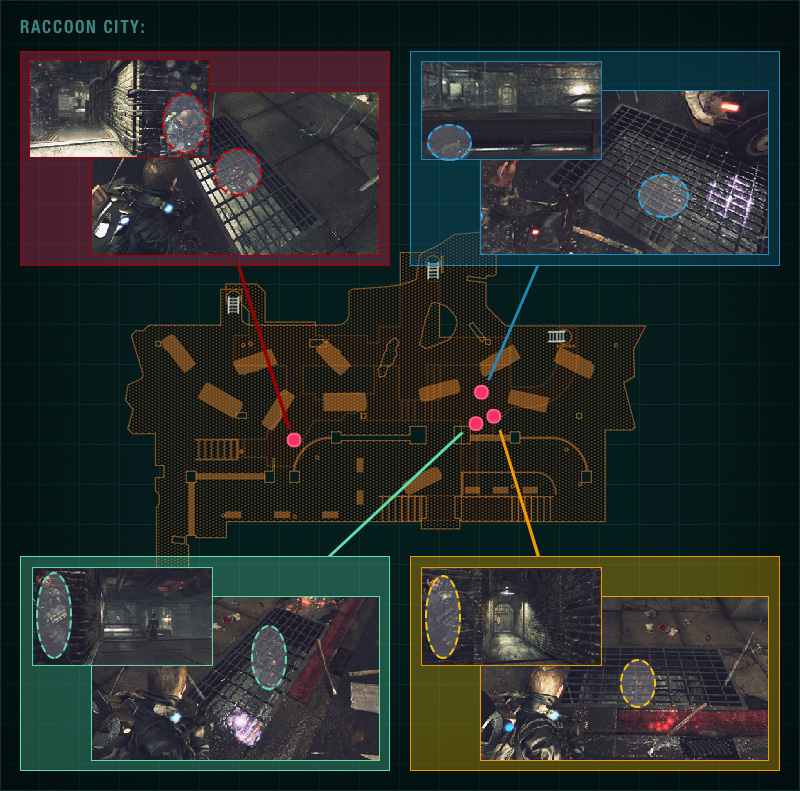 They aren't always obvious, so you need to know about certain points that can hide a nasty surprise.

The planter itself is solid and will stop bullets, but the plant itself won't, making your upper body vulnerable if you choose to hang out here. 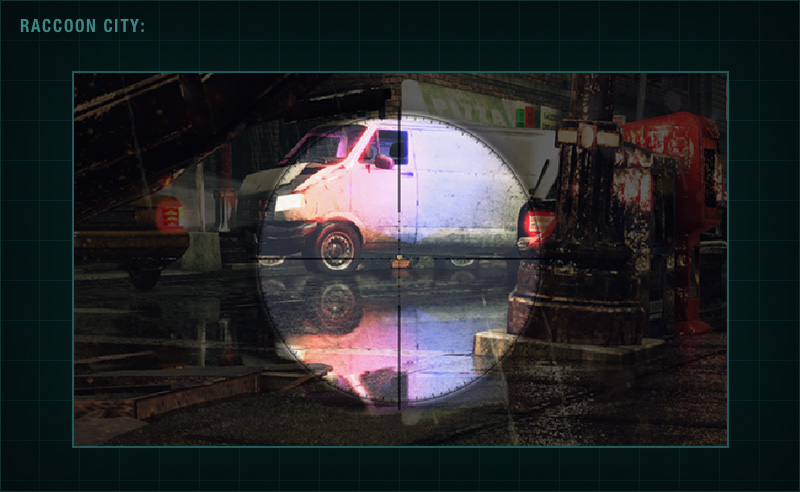 Vans have a big rise compared to other cars, and you can be shot at from underneath if you're not careful. In this image you can see a crawling player using an orange bait shield about to get shot.

It's still the same game, but this stage really makes things feel a lot different.

This concludes the most important points about general Umbrella Corps strategies, from here on we'll be going over the individual features of each map.