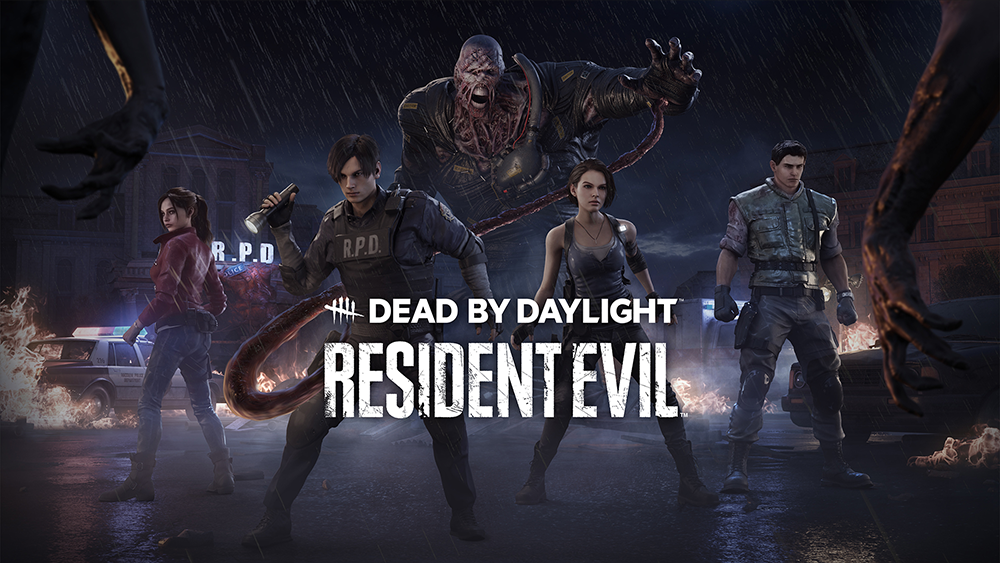 Click here to read the Part 2 where we used Jill to confront Nemesis!


It's already been more than a month since asymmetrical survival horror game Dead by Daylight (DbD) first met the OG of survival horror, Resident Evil in its latest DLC. Have you guys checked it out?

What a surprise, Mathieu Côté, the game director, commented on the development of this collaboration, and we would like to introduce it to everyone.

Mathieu For us here at Behaviour, being given an opportunity to work within a universe as big and rich as Resident Evil was an honor and a wonderful challenge. We wanted to make sure that the players who grew up playing the Resident Evil games and know this world intimately would feel at home in the map and would immediately feel familiar with the characters we represented. Through all this, we had the privilege of working with the team at Capcom to bring the legendary Resident Evil elements into the world of Dead by Daylight.

We always work hard on keeping things secret so that we can surprise our fans and this one was big one! We had a few close calls, but we managed to keep the surprise and deliver two great reveal moments. First, the Capcom event, where we announced that the next chapter would be Resident evil. And then, our 5th year anniversary event where we revealed the characters and the map that would be part of that historic chapter. The reaction videos of our fans hearing this news for the first time are still being passed around the office. It was amazing!


Thank you for your thoughtful comment. We know some fans were expecting a collaboration between "DbD" and "Resident Evil" before we made this announcement, but we're really happy that you made this collaboration as a wonderful surprise.

There's a lot I want to cover about this terrifying team-up, so I've split this article into two parts.
In Part 2, I'll share with you some comments from the DbD developers, so be sure to check back here to find out what they had to say!

As soon as the DLC dropped, I dove right in to the game to claim everything Resident Evil-related! I also saved up a million BP (points needed to build up your characters) and raised my characters' levels so I was ready for whatever the game was going to throw at me. Plus, I needed to make sure I could survive long enough to share all I can about the DLC with you guys! Can Leon survive yet another apocalyptic scenario and make it out alive?! Will Nemesis finally get his revenge on Jill?! Time to find out! Into the foreboding fog I go... 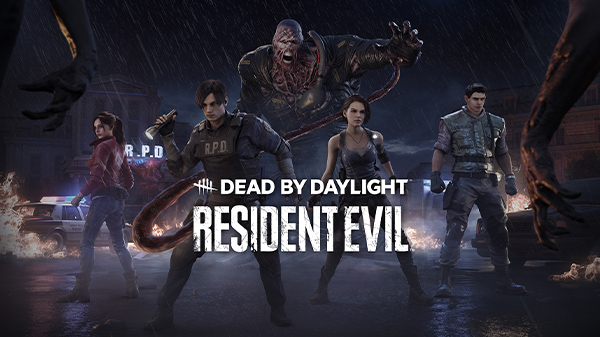 Alright, looks like the match has started. I'm in everyone's favorite doomed police station: the R.P.D. For those of you who don't know, DbD is an asymmetrical survival horror game where one Killer tries to hunt down four Survivors. It's kind of like a game of tag, only much deadlier. The Killer incapacitates Survivors then tries to kill them by hanging them on hooks across the map. The Survivors need to avoid the Killer and restore power to generators so they can escape. Leon survived the downfall of Raccoon City once, but can he do it again?! He's going to need to stay away from the Killer and let out his inner handyman to repair the generators. Good thing my time with the Resident Evil games taught me how to find and manage items! And so, instead of helping my fellow Survivors, I'm going to take Leon on a supply trip. 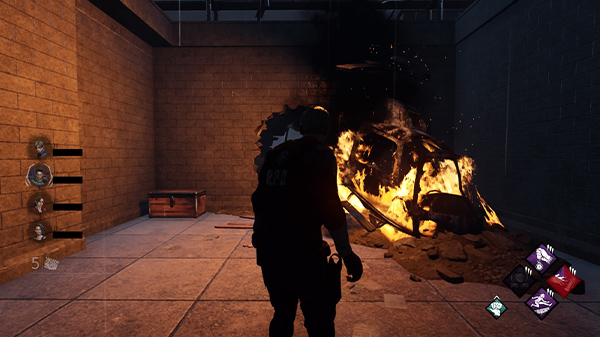 Sorry, guys... If it's any consolation, I've got a bloody party streamer, so we'll all earn twice as much BP!

Man, these hallways are still scary no matter how many times I walk through them. Agh! A zombie! I'm getting major flashbacks to when I screamed my head off after a zombie bit me here in Resident Evil 2: Remake (RE2: Remake)... But wait! Someone from its sequel must be nearby... Nemesis! YES! 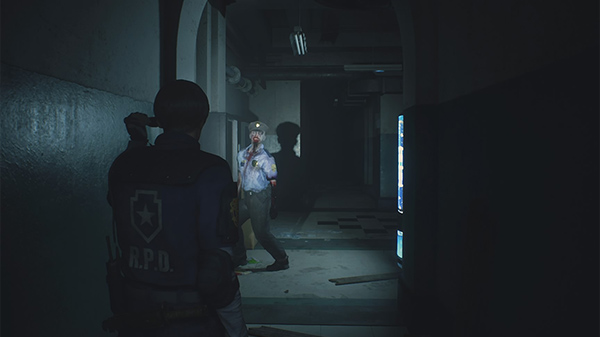 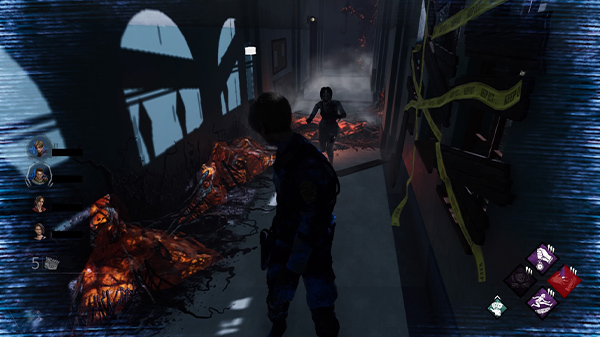 Zombies, in all their gory glory, appear in DbD as they did in RE2: Remake. Oh man, playing in the middle of the night was a bad choice...

I was so spooked I couldn't avoid the zombie and got the "contaminated" status effect... Nemesis knows where zombies are, so I need to high-tail it out of here before the hulking horror finds me! The R.P.D. map in DbD is a sprawling one, making it pretty easy to get lost if you don't know where you're going. But lucky for me, my time playing through both RE2: Remake and Resident Evil 3: Remake has seared the layout of the police station into my mind! If you're a Resident Evil veteran like me, you'll have a leg-up on the competition on this map!

Okay, I'm finally at the main hall where our boy Marvin first gave us the low-down in RE2: Remake. The goddess statue, the typewriter—everything from RE2: Remake has been faithfully recreated! The DbD devs' love of the series is on full display! 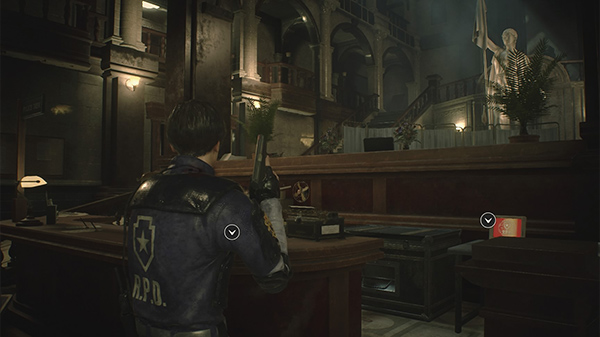 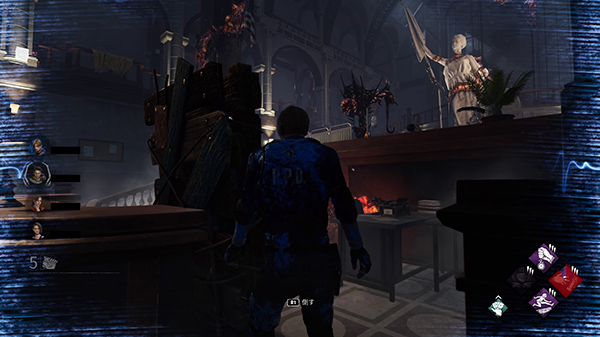 They really nailed the atmosphere of the police station!

Normally, seeing the save point and item box would put me at ease, but I can still hear the footsteps of Mr. X and recall a time he gave me a different type of "face lift" in RE2: Remake... 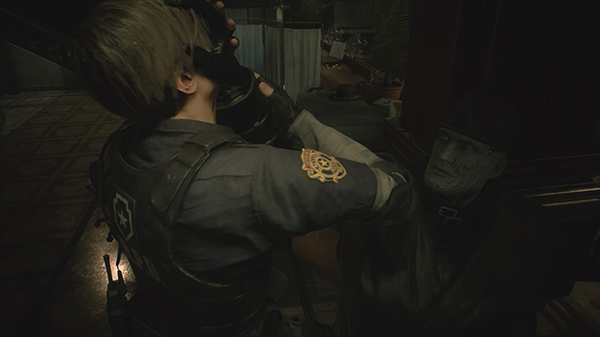 Ahhh memories of RE2: Remake... Or maybe that should be "Aghhh memories!" Have to make sure this doesn't happen in DbD...!


Heading left on the first floor of the main hall takes you to the West Office. Hey, the WELCOME LEON banner is here, too! Neat! 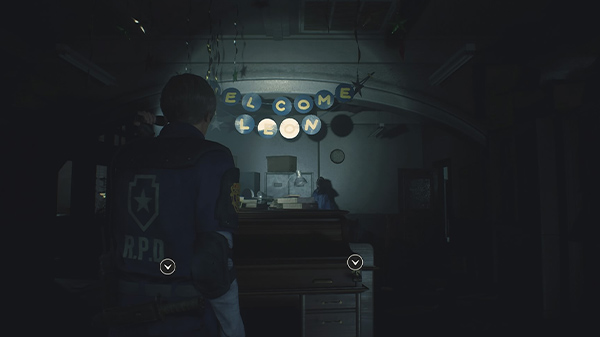 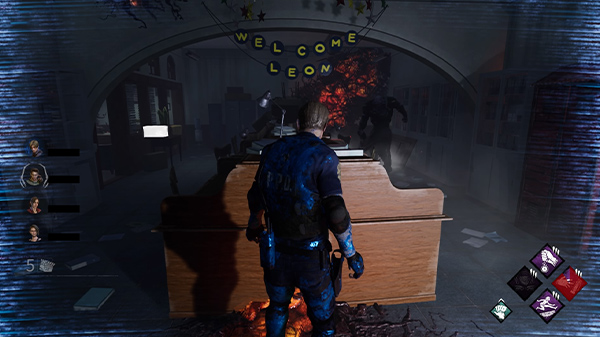 Even though I'm being chased by a bloodthirsty Killer, this banner really does make me feel welcome!

And the "L" is on the desk just like in RE2: Remake! Man, the people at Behaviour Interactive really have an eye for detail! I didn't think they would recreate tiny little atmospheric things like this. Diehard Resident Evil fans are going to be so hyped! 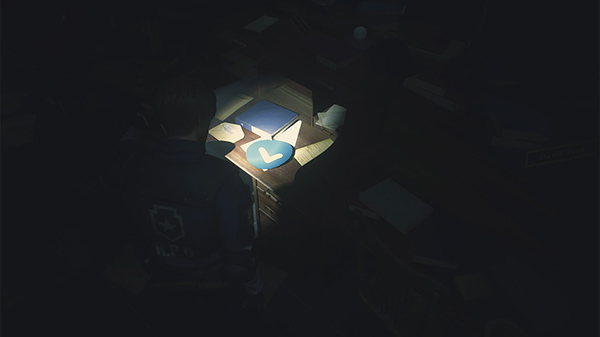 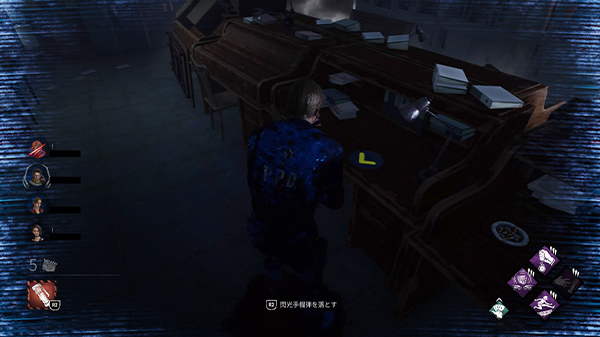 Anyway, better check every nook and cranny in the office to make sure I'm ready for the Killer! That ominous heartbeat means Nemesis, in all his betentacled glory, has found me... Fortunately, Leon's equipped with a Flashbang, which is a Perk (character ability) that stuns the Killer. No better time to use this than right now! Say cheese, you ugly sack of moldy skin! 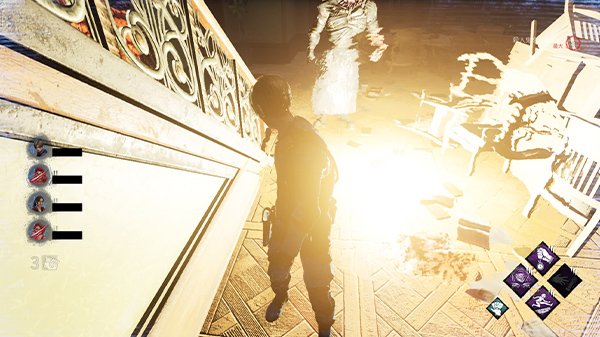 That flash is bright enough to blind anything with eyes...except Nemesis, apparently.

Wait, what? Did I not drop the Flashbang close enough to him? He's still coming after me! Uh-oh! Get outta there, Leon! 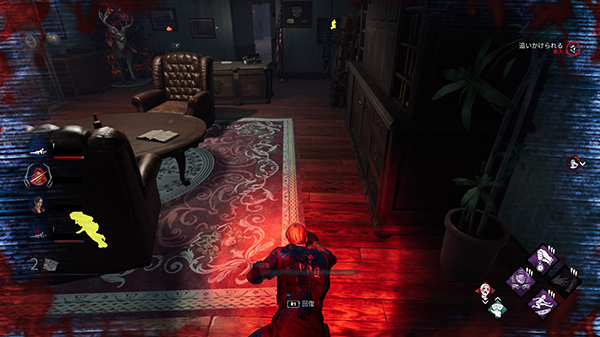 And he got me. Got me good. Story of my life... But I'm not alone! I've got my fellow Survivors...who all managed to safely escape from the police station, haha. Well, given my blindingly obvious failure, I guess I need more practice.

I think I'll leave things here for now. In Part 2, it's my time to become the bad guy. Join me as I share my experience taking control of Nemesis!