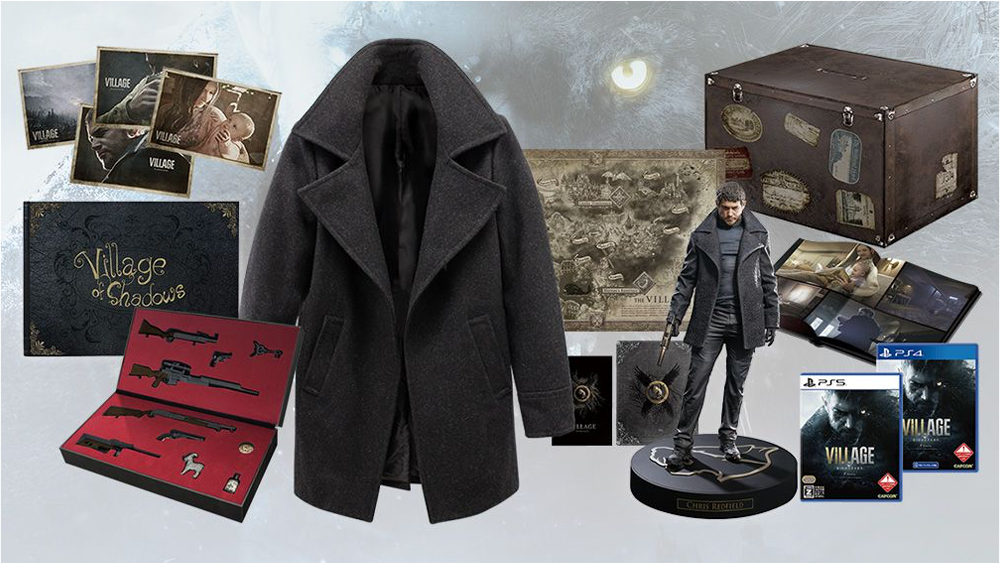 REvealing Secrets: The Making of RE Merch

Resident Evil Village, the newest entry in the series, is almost ready to sink its teeth into us!
I bet many of you are chomping at the bit, like a ravenous zombie at flesh, to get your hands on the game! I know I am!
But it wouldn't be the release of a major Resident Evil game if there weren't collector's editions with exclusive merch!
And so for today's article, I'd like to share an interview I had with two of the heads of e-Capcom, Capcom's official online store.
Not only did we talk about the awesome limited-edition items for Resident Evil Village, but also what went on behind the scenes when creating them!

Still dragging your feet and haven't pre-ordered your Japanese copy of Resident Evil Village? Then head over to the e-Capcom site now! 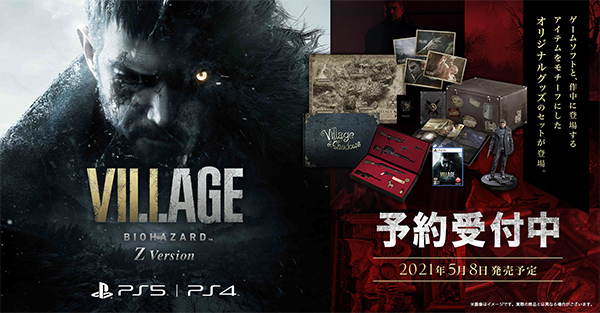 (Note: Shipping to countries outside of Japan is not available.)

Allow me to introduce the heads of e-Capcom: Kana Urasawa and Kenichi Tanaka! These two are the premier planners for the merch available on the e-Capcom site. 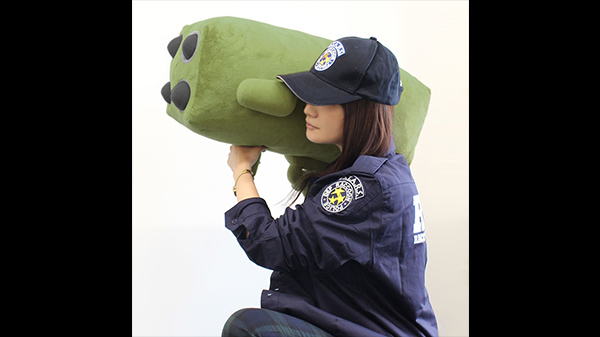 Here they are locked and loaded. Looking to equip yourself with this fluffy rocket launcher? You're in luck! It's for sale on the e-Capcom website!

And without further ado, here's the interview!

Kana:
We actually received a lot of ideas from the game's art director, Tomonori Takano. After choosing from a list of those, we got to work transforming some of them from ideas on a page into tangible items. I personally was in charge of the artbook and replica coat.

I see. Could you tell us a bit more about the artbook? This looks like the picture book Mia reads to her daughter Rose in the game. I know you went to great lengths to recreate the book faithfully, but could you fill us in on the details? 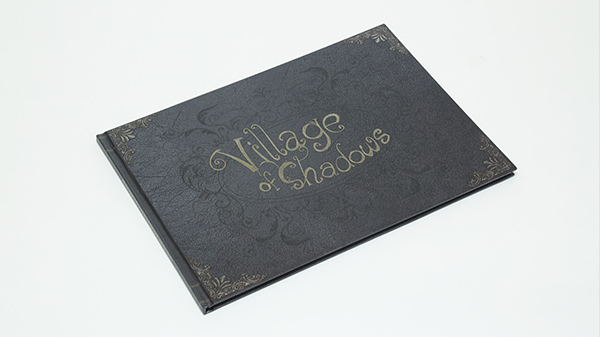 Kana:
In order to bring it to life, we met several times with the development team. We discussed everything from the color of the cover to what materials to use for the pages. We even went over aspects of the book players couldn't know from just playing the game. A lot of care went into the project, as we wanted people to feel the quality and every bit of detail of every page.

I'm sure those who are able to get their hands on the book will be happy to know the game's staff played a key role in bringing it to life.

Kana:
Kana: I certainly hope they like it. It's a great way for players to immerse themselves in the game's world.

Oh, it looks like the artbook comes with a bookmark.

Kana:
Since the artbook is modeled after the one that appears in game, we didn't want to include a page of publishing information. We thought we could use that page to create something else. So we settled on the idea of having readers tear the page out and use it as a bookmark. In doing so, we feel the reader can further immerse themselves in the game world, while having access to a neat little extra.

What can you tell us about the miniature set?

Kana:
For the weapon set, we made everything 1/6 scale specifically to match the Chris Redfield figure included with the collector's edition. 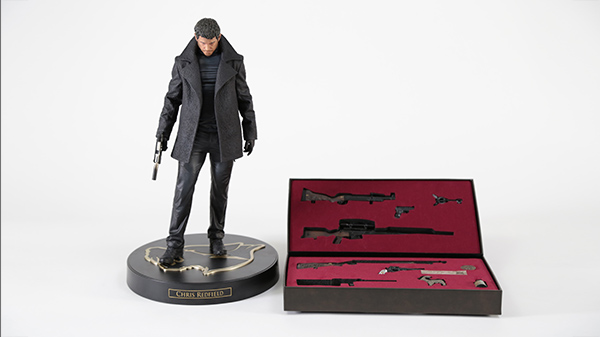 Of course, we couldn't produce the coin and other small items to that scale, or they would have been way too tiny.(laughs)
The weapons are small but detailed; every little part is painted. We went over each piece, as well as the case, several times until the development team gave the OK. I encourage everyone to give each piece a real good look.

The weapons look so good you don't even need to view them up close to see their quality! What sorts of things did you consider when making the set? 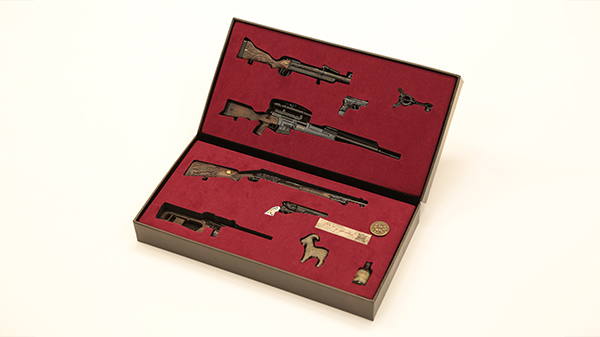 Kenichi:
I'd say we focused mostly on the weight and feel of each weapon.
Model weapons are normally made of metal and plastic, but both of those materials tend to shrink during the molding process.
So when making these miniatures, we had to try out different mold sizes over and over again until we achieved a degree of shrinkage that worked. That's what you can see in the finished set.

And as for the coin, you tried to create the weight and feel of real currency, right?

Kenichi:
The coin is actually a little bit heavier than a 100-yen coin.
And to get it to look like it came straight out of the game, we gave it a slightly tarnished finish, among other things.
I'm sure collectors will be eager to see what kind of role coins like this one end up playing in the game.

The case looks great too. How did you go about designing it?

Kenichi:
The impression collectors get when they first open the case is really important to us. So we placed the weapons in high-quality red urethane foam to make the set look extra fancy.
The contrast between the dark metal of the guns and the bright red foam really catches the eye.
For the outside of the case, we went with a weathered suitcase look complete with worn-out stickers.

It looks like there's some sort of sticker inside the case, too.

Kenichi:
That's a delivery slip from the Duke.
It's his way of saying thanks for purchasing his wares.
We've tried our best to draw collectors into the game world by adding little details here and there, not just with the figure, but with the case itself. I hope those who get their hands on this collection take the time to examine every little detail.

You mentioned a replica coat before. What's the story behind that?

Kana:
For the coat, we borrowed the one actually worn by Chris's motion-capture actor.
When making the replica, though, we couldn't stick to the actor's build, as he's rather large. So, to ensure that as many players as possible could actually wear it, we consulted with fashion designers and looked at a variety of coat sizes.
But don't worry: the coat is still available in the same size as Chris's in the game.
We carefully selected the cloth from dozens of samples, ensuring that we found one that's comfortable and easy to wear. More than anything we wanted to nail the look and feel of Chris's coat, which I think we did. And it wasn't just the cloth—we gave a lot of thought to tag location, too.

We learned there was a demand for RE-themed apparel, so we decided to offer another piece of clothing for this game, too.
We made the coat with the intent of it being used as an actual coat, so I hope those who buy it get a lot of use out of it.

Wow, you guys really poured your hearts and souls into this stuff, didn't you?

Kana:
All of the collector's items were made with careful input from the production team, and we're really proud of the quality we've achieved.

Okay, finally, would you like to say anything to the readers?

Kana:
We've tried to create a lineup of fun merchandise that players can enjoy even after they've finished Resident Evil Village. We hope all those who get their hands on it enjoy it! Also, we've got all sorts of neat stuff on the e-Capcom official store website that both me and the development teams have put everything into making. Please check out the site when you get a chance!

Thank you very much, Kana and Kenichi!
Well, what are you guys waiting for?! Head over to the e-Capcom website now!

(Note: Shipping to countries outside of Japan is not available.)