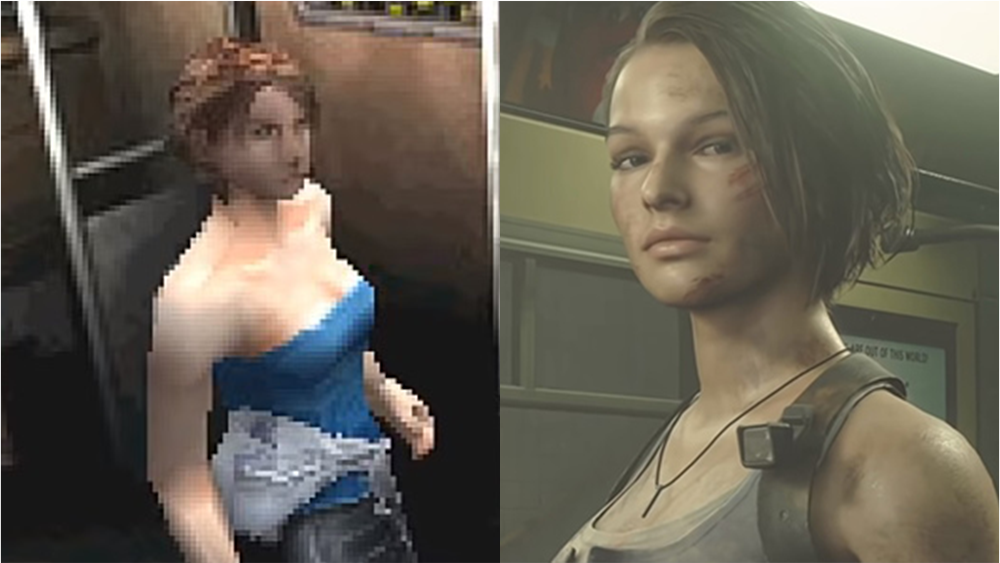 Last article, I had fun revisiting Resident Evil 2 and its remake. Those who haven't checked that out yet, click here.

This time I'm going to dive into the Resident Evil 3 remake and the original Resident Evil 3:Nemesis.
What differences stood out to you? Let us know on social media with the #REBHFun hashtag!

The original RE3 was the first in the series to introduce a dodge mechanic. Pressing the dodge button just before a lunging enemy grabbed Jill allowed her to avoid a nasty attack. (Literally and figuratively.)
This evasive maneuver was eventually resurrected in the remake.

But it turned out that pulling off the new dodge was surprisingly tricky for me.
When I started the game, I was like, "I'm the original RE3 dodge-master gangster! Bring it!" Boy had times changed...
The timing turned out to be pretty tight.

"Samurai Edge" is the iconic handgun issued to S.T.A.R.S. members, but in the remake Jill doesn't have it on her when you take full control.

You can see that Jill actually drops her gun during the opening!
If someone as badass as Jill drops her weapon, you know her opponent's truly terrifying... Enter Nemesis... I'll never be a S.T.A.R.S. member; just watching that explosive opening cutscene made me drop my controller!
But don't worry if you want to destroy some zombie party with the Samurai Edge. Because, my friends, you get it when you complete the game! YES!

New character designs and visual upgrades are always exciting.
21 years separate the releases of the original RE3 and its remake; things have changed a lot in that time. Let's take a look at some familiar U.B.C.S. faces. Check out the awesome new rough-and-ready look for everyone's favorite lady's man.
You can snag Carlos' original RE3 costume as DLC, but his new design really rocks. Not only has Mikhail's appearance changed drastically, his injuries are different, too!
Original = on the verge of death.
Remake = on the verge of needing a few days off work.
Right?
Sustaining less severe injuries (and being all casual about them!) makes him feel like he's more hardy, reliable guy. 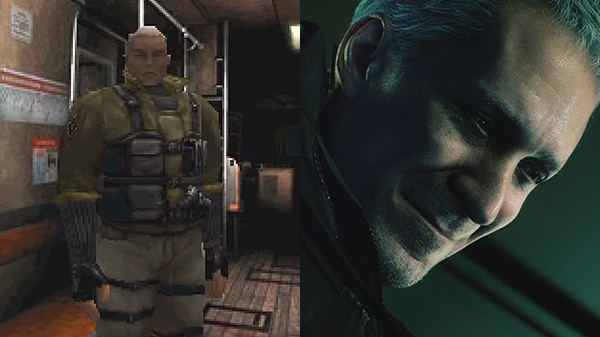 To me, Nicholai feels a little different.
Original = absolutely ruthless villain.
Remake = sly villain.
Those are my impressions, anyway!

Despite the slightly different feel, the remake manages to recapture the original character's malevolence beautifully!
When it comes to the Resident Evil series, Nicholai is one of the stand-out bad guys; when he meets Jill―paragon of justice–he just oozes bad news. Jill staring at Nicholai. You know she hates him right from the get go. Original = Buff.
Remake = Slimmer, intellectual.
In the original, Tyrell was all about the dollar, whereas in the remake he's actually a really kind, dependable guy!
From money-loving meathead to brilliant brainiac. Love it. In the original, Murphy shows signs of infection and starts to turn, so Nicholai takes him out. In the remake, as soon as Murphy appears it's RIP. Poor Murphy. Gets brought into the remake, only to get taken out faster than a speeding bullet. (Bad choice of words there. Sorry, bud!) Poor guy. (Do you guys remember where he appears in the game?) FYI, before joining his unit, Murphy was sentenced to life in prison for killing 20 gang members to avenge his brother's death. Although he doesn't get much screen time, his appearance certainly leaves an impression.

The RE3 remake saw the introduction of parasites.
Drain Deimos can lay eggs inside Jill through her mouth.
Not a great way to spend the day... Green herbs cure her, but, man...that feeling of panic when you don't have one on you!

Ever heard of "Big E", the hit rock band from Raccoon City?
In the original game, fans put up posters for their upcoming gig all around the city. The fans are as loyal as ever in the remake. 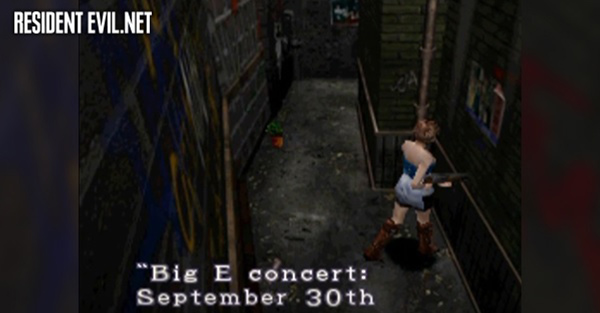 Big E poster from the original RE3. I'd kill to see them live!

And there we go: some of the changes I noted between the original Resident Evil 3 and Resident Evil 3: Remake. When you compare the two, the differences are striking. Games have really evolved in the past 21 years ago, and it's great to see what's changed. What other differences jumped out and grabbed you guys? We'd love to hear from you with the #REBHFun hashtag! Well then, look out for the next UNDER THE UMBRELLA article hiding around the corner!