Tricell HQ has it all

This is a new location, like the Lab, and it showcases all of the game's unique features.
It's a larger map overall when compared to the Lab, and includes a variety of setups. 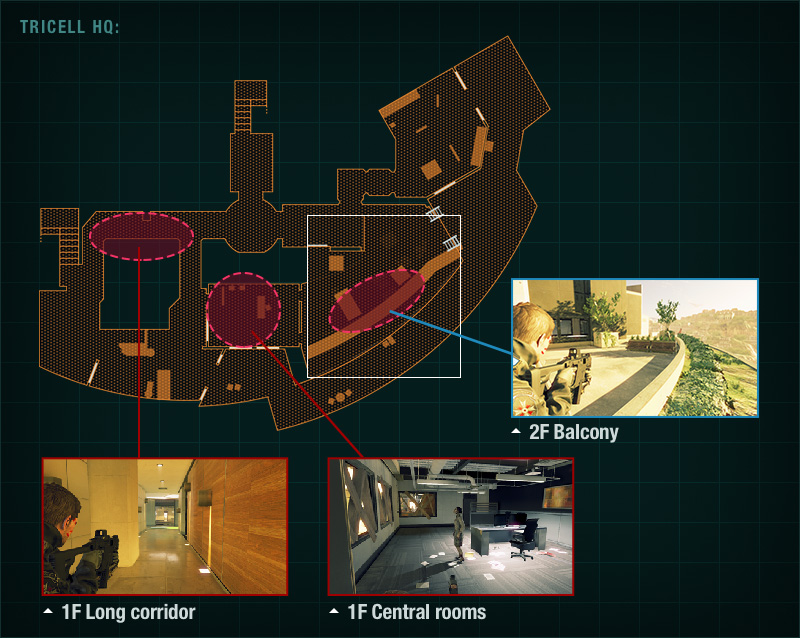 A lot of long-range cover standoffs go down here.

Lots of doors and blocked entrances.

Useful for guarding against the outside route, but it also has a number of ambush points and is hard to guard effectively.

While the Lab had a nebulous area where skirmishes would happen, combat in the Tricell HQ seems to usually occur in well-defined locations, with each one requiring its own set of strategies.

I'll be going over these strategies below.

These are the more common places where people will wait in ambush for left and right starts.

Together they cover most of the offensive routes, and are well-guarded against rear attacks. If one of these spots falls it opens up the rest to attack, and is usually a good indicator of how the round will end. 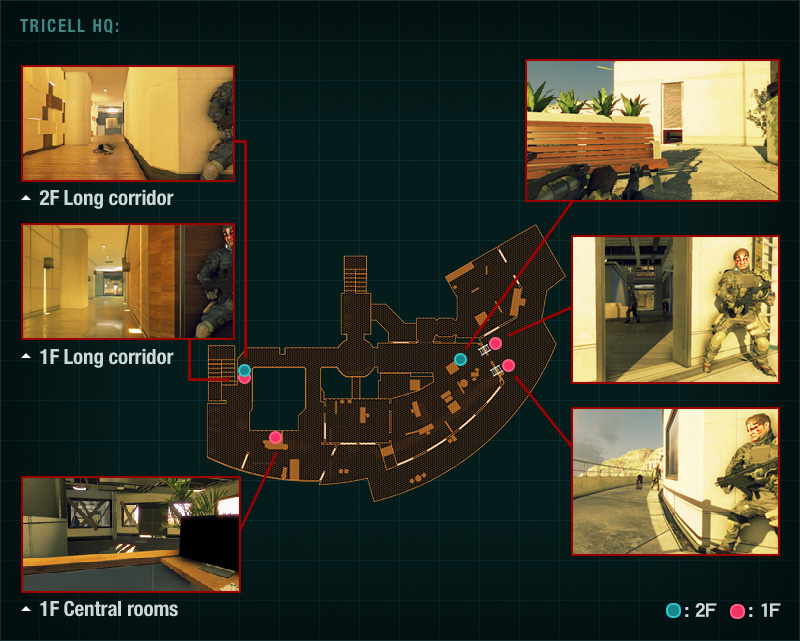 Here's how you can use enemy sounds to figure out their locations.
I recommend using a pair of stereo headphones when playing. 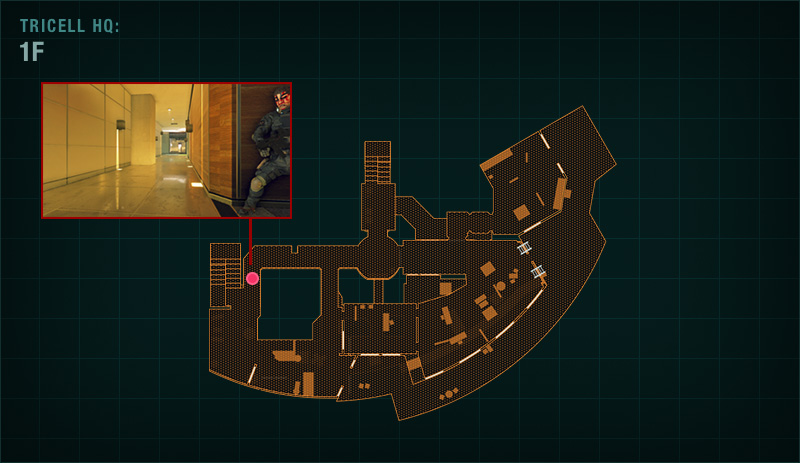 If you're waiting here... 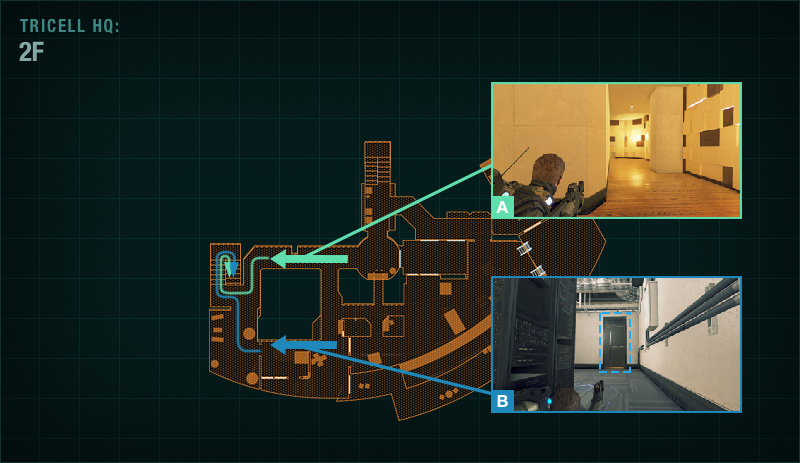 A and you hear footsteps right above you, then the enemy might be trying to get behind you using the similar rout on the second floor.


B If you hear a door as well, then they're moving along this route. 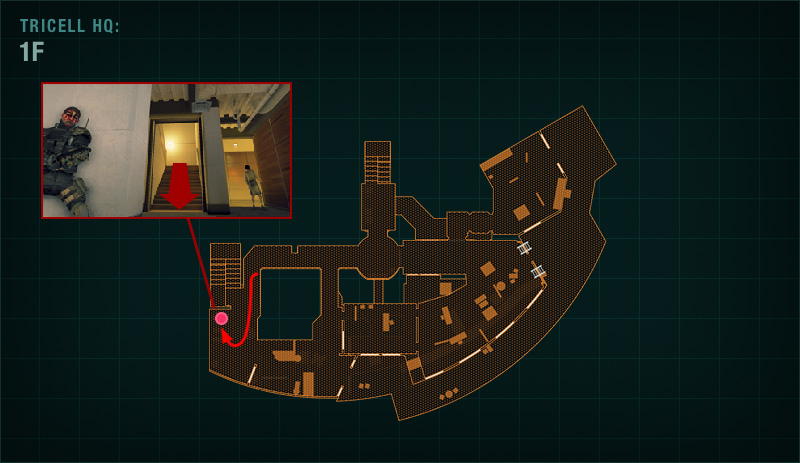 If you move immediately over to this location, you can secure a great spot without being seen.
Try and accomplish this as quietly as possible.

There's a lot of camping in this map, and the pace is slower, which makes the following strategies more viable.


There are two strategies here:
●Try and lure the enemy into range
●Use grenades

・Sensor Grenade
Great for learning positions
Difficult to escape
If the enemy stays put however, you'll need to try something else like luring them out or having a team mate sneak up behind.
・Jammer Buster
Gives the enemy location away If there are zombies nearby
Affected enemies will need to deal with the zombie crowd
・Explosive Grenades
Can take out enemies in cover
If they don't die or there's nobody there, they might escape and show up again nearby 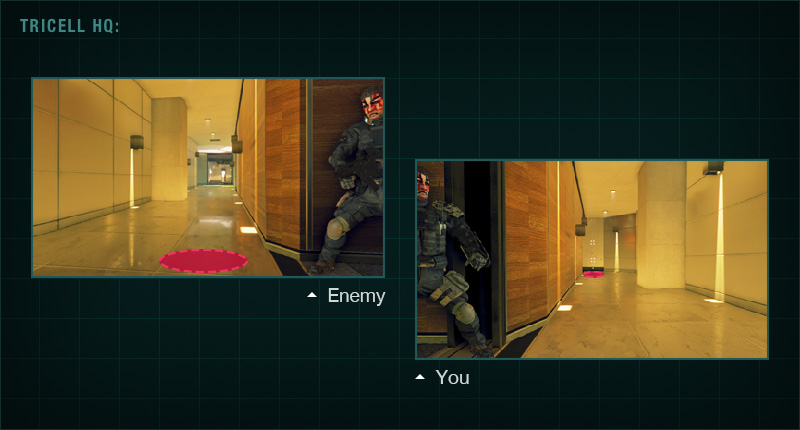 Think about what could happen if an enemy were here, and you were at the opposite corner.
If you throw an explosive grenade on the red mark, they'll be forced to flee if they don't want to die.
Once they run, you can either move round the other side, or make a dash towards them to gain some ground.

Learn the different ways of staying in cover

It's all fine and dandy if you're able to take out an opponent in one volley when your in cover.
If you both end up in cover however, it'll usually take multiple tries.
In these cases try and change your position each time you pop out to confuse the opponent. 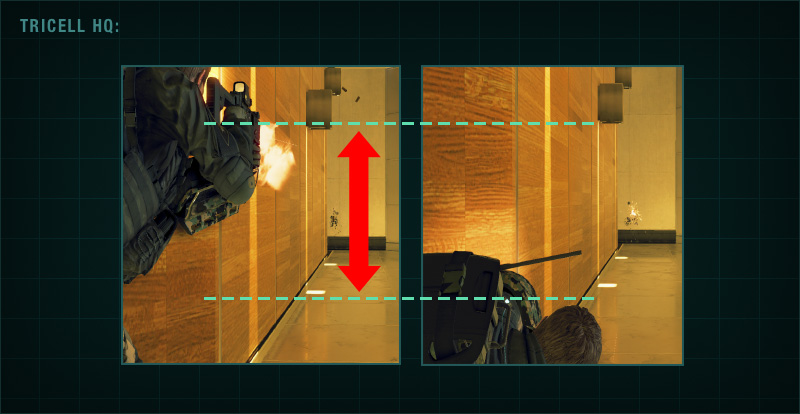 It's not the simplest of things to explain, but this is how much room you have when choosing at what height to stay in cover.

Usually if you come out at the top, the enemy will keep their aim high waiting to get an easy shot. If you change your position they'll need to waste time to aim, which you can use to shoot instead.

Changing your position each time makes it hard for the enemy to aim for your head; even these small optimizations can improve your chances.

A lot of players will repeat strategies that have worked previously.
Here are some common ones and how to deal with them. 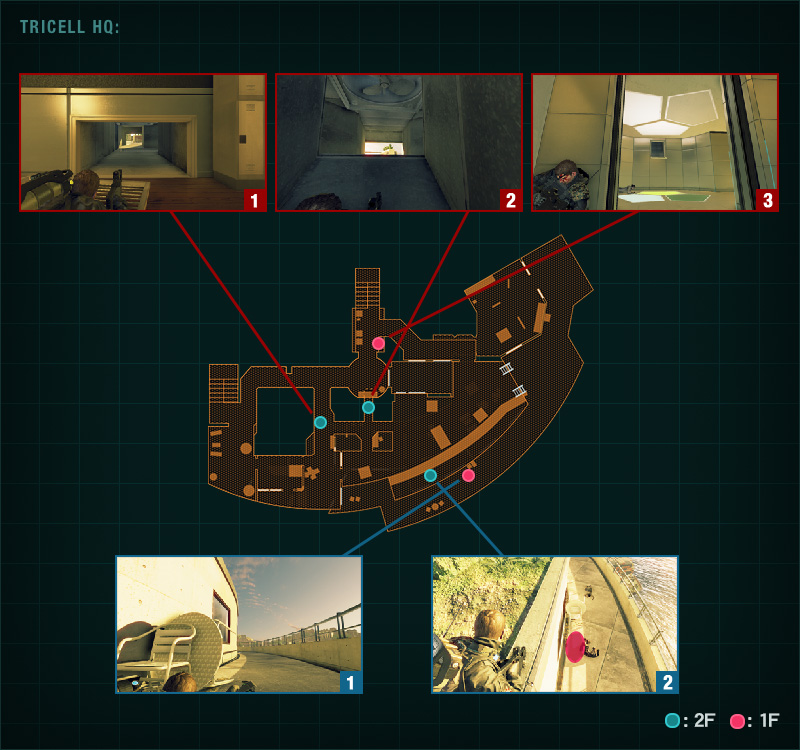 1 If there's a player who likes to crawl into this duct...


2 can be easily shot from the 2F balcony, in fact as mentioned above the balcony is great for guarding the external route.

That's all for now

Hopefully you have a better idea of what to look out for on the battlefield.
Next time I'll be going over a certain outside map with routes that aren't so clearly defined
See you then.